Premature Optimism about Science and Religion in America

One of the foremost opponents of all attacks on evolutionary science has been Niles Eldredge, retired from the American Museum of Natural History. One of his many books was The Triumph of Evolution and the Failure of Creationism (the last phrase was printed backwards on the cover, spine, and title page). When Eldredge wrote this book, he was pretty angry at the creationists. 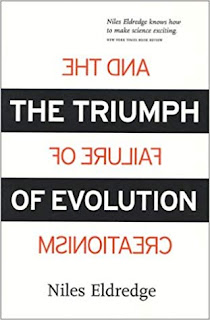 In recent decades, I’ve stopped getting upset about what the creationists do. You cannot stop them from making false claims, and profiting from the support of millions of people whom they have duped. They are part of the conservative movement which now controls America, and they are not going to step back from the power and money that comes with it. They know they are lying, and it does no good to point out their errors to them, or to the people who willingly believe them.

Instead, what I do is to use creationism as an opportunity to teach science, and to do so by the use of humor. I have now published two articles in Skeptical Inquirer magazine entitled “Creationist Funhouse,” episodes one and two  (readable by subscribers only). More are on the way.

Eldredge allowed himself to be optimistic toward the end of his book, which was published in 2000. He wrote, “The tired old creationism debate—mired as it so thoroughly is in the nineteenth century—simply has not prepared us for the kind of positive interaction between science and religion that I see as eminently possible as we enter the new Millennium and grapple with tough environmental issues.” As Eldredge and the rest of us now know only too well, religion and science are further apart than ever, because “religion” now often means unquestioning devotion to Donald Trump, and there is less hope than ever for environmental problems to be solved, once again because of unquestioning devotion to Donald Trump. Eldredge’s millennial optimism was a good try, but reality has proven worse than we could have imagined back in 2000.