Face to Face with War: The Four Horsemen of the Apocalypse, part 3

This is the third essay I have written about the novel The Four Horsemen of the Apocalypse by Spanish novelist Vicente Blasco Ibañez. The world in 2021 is no less vulnerable to war than in any previous year, decade, century, or millennium.

I suppose it is about time to describe the novel itself. It is focused on Marcelo Desnoyers, a Frenchman who fled France to avoid being drafted into the Franco-Prussian War of 1870. He earned a fortune in Argentina and returned to France for what he considered to be the pinnacle of cultured life. He bought a big house, and then bought a castle in the country near the Marne River. He filled both places with incredible treasures. His two children were Argentinian citizens. One of them, his son Julio, became well-known in Paris for his dancing and his wasteful lifestyle. In particular, a married woman was his lover.

When the Great War started, Marcelo was too old to fight, and Julio was exempt because he was not a French citizen. The war changed everything for all of them. Marcelo went out to his castle, just in time, it turned out, for the Battle of the Marne. He saw it all from his castle, which the Germans attacked and plundered. The Germans not only slaughtered all of the people they could find in the village near the castle but were also full of arrogance. The German officers feasted on Marcelo’s food, and even dressed themselves in his daughter’s dresses and danced around. They shat upon the rugs. Ibañez vividly describes the scenes, using all of the senses. In the wounded villagers, brains were visible, throbbing behind faces without noses. A cannon ball tore off the head of one soldier, who for just a split second kept walking, with two jets of red blood shooting upward from his neck. Disemboweled horses trampled their own entrails. It was at the greenest time of year, when the wheat was in full grain, the most vivid contrast possible between life and death.

The German officers also pretended to be sincerely good people. They carried photos of their beloved families and proclaimed that only by destroying France would their families be able to live. This was an incredible lie but one that, Ibañez suggested, the Germans actually believed. They recognized Marcelo as the castle owner, and instead of just shooting him they tried to convince him of the righteousness of their cause.

But the Germans were beaten back. During their retreat, they transformed the ruined castle into a military hospital. Here Marcelo watched some of the very officers who had so recently boasted of their inevitable victory return, mangled almost beyond recognition, and die. When the French army returned, the Germans fled.

Northern France began to recover. But life for the Desnoyers family changed forever. Julio’s lover, feeling guilty at cuckolding her husband, found that the husband had become a military hero as he was wounded in battle. She sought him out, stayed by his side, and nursed him back to health. Julio, heartbroken, felt that he could do only one thing: join the French army as a foreign volunteer. He did so and became a hero himself. His motivation was not patriotism so much as it was forlorn love, and to just do something with his life rather than just to enjoy his wealth. His father Marcelo, who every day felt the guilt at having fled his patriotic duty in 1870, was now intensely proud of his son.

As you can certainly guess, Julio was killed in battle. The story ends, after almost 500 pages, with Marcelo and his family feeling almost infinite grief out in the middle of the burial fields, months after the battle was over. The bodies of slaughtered French soldiers had been piled up and their burial places marked only with little wooden crosses. The bodies of the German soldiers were piled in unmarked pits and covered with dirt.

The scale of the burial fields is nearly impossible to imagine apart from Ibañez’s description. I got only a tiny glimpse of what it must have been like when I hiked with my son-in-law’s family in the Vosges Mountains that divide Alsace and Lorraine in France in 2016. We went quickly past a World War One cemetery. The French family had seen it, and dozens of others, scattered throughout the mountains, but for me it was a powerful experience. 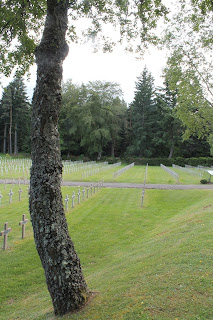 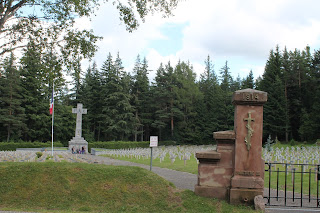 To a large extent, The Four Horsemen of the Apocalypse was a story that wove together improbable circumstances in order to give the author, who was a journalist with first-hand experience, the excuse to write about the ideas that led to the war. How likely would it be that the sister of Marcelo’s wife would just happen to marry a German who became a top official in the evil German government, and explained his point of view to the rest of the family in great detail? How likely that Julio and later Marcelo should befriend a Russian socialist living in Paris, who explained his point of view in great detail? He said that the supposed Christianity of the Germans was actually the worship of Thor rather than of Jesus. It was the atheist socialist, not the German Christians, who believed that “blessed are the peacemakers.” But the characters were not simply excuses for ideas; they were, to me, vividly real.

And was it not all ultimately futile? Ibañez wrote, through the mind of Marcelo, “I wonder if any star knows that Bismarck ever existed! I wonder if the plants are aware of the divine mission of the German nation!” But I wonder if Ibañez would have been able to guess that, a hundred years later, the European Union, led by France and Germany, would get the Nobel Peace Prize?

But hope remains defiant. At the very end, Marcelo’s daughter hugged her fiancé, a wounded hero, right out in the middle of the burial fields—love may not triumph over, but it remains defiant against, death.