Changing the World? Another Prairie Festival at the Land Institute

I went to the Prairie Festival in September 2019. This year’s festival is virtual, due to the pandemic.

The Prairie Festival is an annual celebration at The Land Institute in Salina, Kansas. It is part scientific meeting, part artistic celebration, and part barn dance. The scientific presentations, which drew experts from all over the country, spoke to a crowd in a big barn with sides open to the weather, which is often nice just before and after the festival but usually tempestuous during it. I sat on the dirt floor to listen to the presentations.

The Land Institute has the modest task of saving the world’s agriculture. The standard farming practice of much of the world—planting crops that only live one year, and which require megatonnage of fertilizers and pesticides—have long been causing immense soil erosion and pollution. The Land Institute scientists are busily making discoveries that can allow a transition to an agricultural system that uses perennial crops and in which crop biodiversity can reduce or even eliminate the need for chemicals. These are not just theoretical questions. They have also bred perennial edible grains such as kernza that have market value, that is, unless the big corporations that make money from wheat and corn bury it under layers of misinformation.

The Land Institute also knows that you cannot have an agricultural transition without having cultural support. The hundreds of attendees loved being there. We carry the good news of ecological agriculture back to our homes and lives (I teach university students about it). Hence the barn dance: this event has to be fun.

Some of the best scientists and environmental activists were there. Amory Lovins, founder and director of the Rocky Mountain Institute, presented mounds of facts (all of them easy to understand, but there were lots of them) that the transition to sustainable energy, leaving behind fossils fuels, is not only possible but profitable, and not someday but right now. If left to themselves without political pressure from the Trump worshipers, citizens and utilities alike will favor energy efficiency. Another major speaker was BillMcKibben. The “minor” speakers were also amazing, such as the quietly confident evolutionary-scientist-turned-environmental-educator Ana Luz Porzecanski from the American Museum of Natural History. 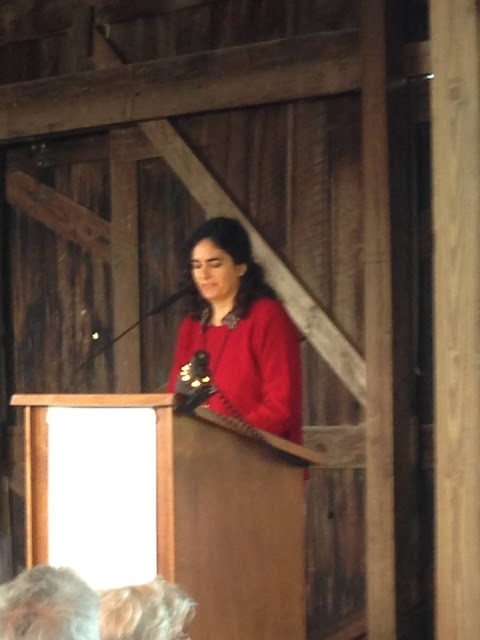 But I cannot imagine that their effort will ultimately be successful. I know they will continue their efforts and enthusiasm—for the alternative is for us to give up and die.

Here are some of the things that make me less confident than ever that the efforts of sincere and intelligent environmentalists will change the world enough and in time to avert disaster.

I have always told my students that global warming itself is not going to kill anyone. It is the consequences, such as agricultural collapse, that are dangerous. I tell them that we simply cannot afford global warming. But Bill McKibben told about a place in the Middle East where the daytime temperaturesexceeded 129 degrees F in 2019. At this temperature, a human will die in three hours. (Be warned that every news outlet that covers this story requires you to enable ads or in some cases to subscribe before you can even look at their website.)

Unlike many of the attendees, I came away from the Festival with an action plan: to continue doing what I already do, which is to teach undergraduates about the problem. It fits right into general biology and general botany; indeed, it would be unethical to omit it. But for many of the others? I glanced over at a woman’s notes. There was very little specific information on them. She wrote, “Need dramatic change.” (She wrote Δ instead of change. In which case, maybe she was a science teacher who will make a difference.) “Must think in new ways,” she also wrote.

Bill McKibben spends much of his time protesting in ways that get him arrested. He is a professional jailbird in this sense. This includes protests against Trump anti-immigration policies. Why? Because many of these immigrants are environmental refugees, for example from drought-blighted farms in Honduras. I teach my students that there will soon be environmental refugees; India already has fences up to keep flooded Bangladeshis out when, someday, they lose most of their farmland. But apparently it isn’t someday; it’s now. But it is fortunate that McKibben gets arrested up in the Northeast, because if he protested in Texas, he would be guilty of a felony and face up to ten years in prison. This law took effect on September 1, 2019.

I have also always assumed that correct information about what is going on in the world is readily available. But I have recently found that many legitimate news sites require you to either enable advertisements to be downloaded to your computer, or that you subscribe. Perhaps the only news you can get is (overwhelmingly) from Trump-worshiper websites or (much less) from flaming liberal websites. Where is this wonderland of information promised by that new-fangled internet?

Whenever I leave a Prairie Festival, I feel good that so many sincere and intelligent people are at work on these vital problems. But as I drove back down into Oklahoma, and saw the hundreds of pieces of garbage on the roadside, my enthusiasm was drowned in the reality of the utter self-centeredness of the majority of people.