I’m a beta male and proud of it. I’ll let the alpha males swagger around and show off their strength and (in Dixie) act like their big trucks prove their virility even if paying for them drives them into bankruptcy. In contrast, I live in a world of quiet intelligence and keep my finances from disaster. Let the alpha males have their alpha females; I like beta females just fine, not the least of whom is my wife, who is as quiet, intelligent, and responsible as I am, if not more. My wife and I have not spent one moment wishing we were alphas.

You might think it would be fun to be an alpha male. But, in nature, alpha males experience a lot of stress because they have to constantly fight off the other aspiring-alpha males. Only in human harems can the alpha male sit back on his cushion and relax as his eunuchs guard him. Elephant seal alpha males lose up to half their weight during the breeding season, not by producing sperm (which are cheap) but by waddling around all day and all night (which is also day in the Arctic) fighting off the challengers. Their cortisol levels are much higher than those of the beta males. 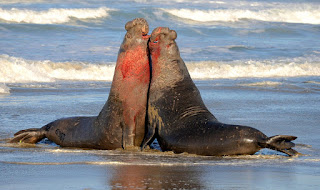 (Photo by A. Friedlaender)

Beta males sometimes save the species. In nature, sexual selection favors alpha males who develop outlandish adaptations such as huge antlers. And the alpha females love it. Sexual selection favors ever more and more outlandish adaptations. One might guess that this process would go on until the males could not even lift their heads, and the species would go extinct.

Republicans and Christians: In the Entropy Business

The Second Law of Thermodynamics says that the overall amount of entropy (disorder) increases over time in the universe. Political and religious conservatives have parasitized this Second Law for their own profit.

The business plan is simple: just create havoc, disorder, mayhem, hatred, confusion (or, as scientists call all of this, entropy) and then sell people the things they need to survive in this entropic environment.

And, by the way, call this entropy “freedom.”

The Republican Party uses this plan in almost every way. Let me just use one example: guns. Republicans want everyone to have guns all the time everywhere. If you don’t have a gun, and somebody shoots you, it’s your own damn fault. What happens when you increase the number of guns in circulation among human beings, some of whom are ready to pull a trigger whenever they get angry? Predictably, you get more shootings. How do you protect yourselves from shooters? You need to get a gun also. The NRA keeps laws that restrict firearms from being enacted, resulting in more shootings; AND they represent manufacturers who will sell you firearms. The Republicans are in the entropy business: they create an environment of gun violence, then claim the solution to gun violence is more guns—then they sell you guns.

This is the plan in Oklahoma, anyway. The Oklahoma House passed a bill that would allow anyone who is legally able to carry a firearm to bring them to school. The governor vetoed the bill, but state representatives are threatening a special summer session to override the veto, and the NRA threatens to mount a campaign against her.


The fundamentalist churches are also in the entropy business. The first thing they do is to tell you that, unless you accept their doctrines and become a Republican and stand your ground regarding unlimited access to guns, then you are going to hell. If you even question Donald Trump, you are going to hell. They make everyone in their churches feel like all of society around them is damned, mostly because of Democrats. But, they offer the solution: give them your obedience and your money. The fundamentalist churches make lots of money and get lots of people to obey the Republican Party by convincing people that the only way to not be overwhelmed by the entropy of the world is to join them.


These business plans are working nicely. According to a recently updated CNN article, there have been 22 school shootings in the first 20 weeks of 2018.

Most of the progress over evolutionary time has been in the local reduction of entropy. While, according to the Second Law, total entropy must always increase in the universe, it can and does decrease in localized systems, whether cells or organisms or ecosystems. You would think that fundamentalist creationists would celebrate the reduction of entropy as proof of God. They used to. But apparently this is not what they do any more.