New Darwin Video: I Have a Stethoscope and You Don't!

Click here for a new Darwin video in which I explain how some doctors and scientists, whether legitimate or not, use images rather than facts to enhance their credibility. It relates to chapter 14 of my book Scientifically Thinking: How to Liberate Your Mind, Solve the World's Problems, and Embrace the Beauty of Science.
Posted by Honest Ab at 9:10 AM No comments:

We like to think that, as modern Americans, we have passed the social-evolutionary stage of tribalism. But we have not. We still respond to other people, and potentially threatening situations, the way our tribal ancestors did.

On August 9, a white man walked into a Wal-Mart in Springfield, Missouri, openlycarrying an assault weapon and dressed in a bulletproof vest. People, their memories fresh of the mass shootings that occurred in Texas and Ohio just days before, fled the building, as did the armed man. He surrendered peacefully when authorities arrived.

The man claimed that he was performing an experiment. He had the legal right to openly carry arms. He wanted to find out if places such as Wal-Mart would respect that right. The authorities informed him that his right to carry weapons did not give him the right to act in a way that alarmed the public.

My point about tribalism is this. The man was arrested and treated respectfully because he was white. If he had been black, I have no doubt that he would have been shot—if not by the police, then by the private citizen who kept him at gunpoint while awaiting the police. The white majority in America view other white people as being part of their tribe, and black people as part of a separate tribe. Tribal identity—us vs. them—overwhelmingly determines how we act toward other people, especially in a threatening situation.

This man acted calmly, never pointing his weapon at anyone. But the news is full of white men who have, very recently, committed acts of mass terrorism. Among white conservative males, pent-up resentment brews to a white-hot intensity, in some cases erupting into open anger.

But resentment against what? What immense burden of injustice have white males experienced—from any level of government, or from the economic system, or society in general—that would justify such extreme anger? The idea that white males have been victims of oppression or prejudice, as a group, is ludicrous.

But suppose a black man loses his cool and gets angry. This happened recently in Tulsa, where I live. A black man parked his car in the fire zone at a library. When an armed security guard told him to move his car, he started screaming at her, accusing her of racism and threatening to get her fired. She did not fire at him, and the situation ended without further incident. Obviously, this black man displayed as much crazy anger as do many white men.

The difference is that black people have, in fact, suffered nearly unending oppression in America. Their anger, though inappropriate, is understandable. They were brought here as slaves; they suffered decades of lynching and over a century of racist laws; and, today, the number of black men (even unarmed black men, even uniformed black security guards) get shot by white police far in excess of black police shooting white people. Understandably, black people are afraid of white police, even the majority of police who would not shoot them, and afraid of white men, any of whom might be carrying a concealed weapon and be willing to use it without thinking.

It is equally wrong for whites and blacks to freak out. But blacks, at least, have a reason to feel that way. White supremacist groups far outnumber black supremacist groups. The black groups possess far fewer firearms, and when they do, they get raided. This is what happened to the Nuwabian Nation of Moors. Meanwhile, white supremacist cults continue to proliferate and to accumulate their weapons. White reaction to real or possible threats is strongly controlled by their tribal identity as whites.

Black people will not continue to put up with this. And when a seemingly minor event ignites their wrath, what the black extremists will do will not be reasonable, pretty, or legal. But whites have been asking for it for a long time. I remain astonished that most black people still like most white people.

Just When We Thought We Had Seen Everything: Sharpiegate

We have become accustomed to Donald Trump considering Himself to be personally inerrant on every subject about which he comments, and that His worshipers believe everything He says even after it has been proven wrong. This is the kind of behavior that you would expect to see from God and His worshipers. Does Donald Trump fantasize that He is God? This started with the very first day of His administration, in which He claimed that His inauguration was the biggest one in American history, photographic evidence to the contrary. And it continues at this moment with Sharpiegate.

At first, there appeared to at least be understandable motives for Trump’s lies. He wants us to think that He is the most popular president in American history, despite the fact that Hillary Clinton got more votes. That is, Donald Trump lost the popular vote. He was one of only four American presidents to win the electoral vote but lose the popular vote. The other three were George W. Bush, Rutherford Hayes, and Benjamin Harrison—all Republicans. (John Quincy Adams, who was president before the modern Republican and Democratic parties existed, also lost the electoral vote, but was selected by the House of Representatives. The fact that Trump legitimately won the election was not good enough. He has a psychological need to be at the very top, not just of votes but of inaugural attendees.

But what possible reason could there be for Sharpiegate? As Hurricane Dorian approached the United States in late August, 2019, the National Weather Service used their standard computer programs and the most current data to predict the most likely path of the hurricane. At that time, they believed that Florida would receive a direct hit. To everyone’s surprise, Dorian turned and went north along the Atlantic coast. At no time did the NWS scientists predict that the hurricane would have a significant impact on Alabama.

But Donald Trump insisted that it would. At a press conference, he held up a placard that showed the NWS-predicted path, which did not include Alabama. But this graph had a line drawn on it that included southern Alabama. It had apparently been drawn on the graph with a blue sharpie. The NWS scientists said that this prediction was wrong. But the top administrators of NOAA, the agency that includes NWS, defended the president. (They, unlike the career scientists, are executive appointees.) 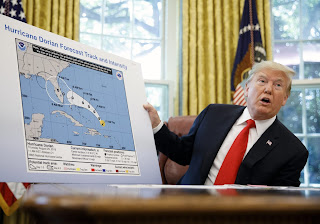 [Photo from the New Yorker]

I, for one, cannot imagine how making His own weather prediction could possibly help Trump’s image. My guess is that He probably did it just because He thinks He can command the winds and the waves the way the Bible says that Jesus did.

At no previous point in American history has scientific thinking been in such danger. For the first time, we have a president Who considers Himself to be an authoritative source of scientific data, literally out of thin air. It is no longer just major concepts such as evolution and global warming that are at risk, but the very data themselves. The Great God Donald Trump creates Truth. I always thought Christians believed that only God could do that.

As Free as a Cow

Many hyper-conservatives (who used to be the extreme fringe of the Republican Party but are now its mainstream) like to think they are defending freedom against tyranny (for example, the tyranny of the metric system, as in the rant by Tucker Carlson; see a previous essay). They think they are “free as a bird.”

But these hyper-conservatives are not free as a bird. They are as free as a cow. The hyper-conservatives believe whatever the NRA and Trump tell them, without questioning it. They will go wherever their idols lead them. They are like cows walking up the ramp into the truck, then down the ramp into the slaughterhouse, without questioning the motives of the humans who prod them.

Even worse, most rich people (not just rich hyper-conservatives) are only as free as a bacterium. Bacteria have no brains, no awareness. All they know how to do is to metabolize, reproduce, and fill their environment with toxins that may suppress the growth of other bacteria. In most cases, a corporation exists to do just one thing—to grow and to force other corporations out of the marketplace. A corporation then becomes like a bacterial infection in the nation and society. The rich people who own or manage these corporations, likewise, simply want to get more money, even if their greed kills the corporation, the society, the country. They are like a bacterial infection that kills the host animal.

This would seem to be a bad idea for bacteria, and natural selection should cause such ultimately self-destructive bacteria to go extinct. And, in many cases, this is just what happens. But if the bacteria are able to launch themselves onto another host, they will continue to survive on the new animal even as the previous one dies. The situation with rich people is similar. If they can get their money out of the corporation they are killing in time to invest it in a secret overseas bank account, they can continue to enjoy their wealth even after the demise of their corporation. The only victims are the employees of the corporation, and the small investors, and the customers. Right at this moment, there are thousands of wealthy people who never have to work again because they have fortunes that they took from corporations that they helped to kill.

And hyper-conservatives think that this is a good system. They want the very, very rich people to be as free as a cow, or as free as a bacterium, rather than free as a bird. A bird can see danger ahead and fly in another direction. Birds usually do not blindly follow a leader. Each bird makes its own decision about what to do and when to do it. Even migrating flocks of birds have no real leader, but respond to cues from one another about when to take flight and where to go.

Hyper-conservatives are leading our country toward the slaughterhouse. They have already infected us, and our death is imminent unless their strangle-hold on American minds is broken.