Somebody had to invent terraces

Human history has largely been the story of destructive human impact on the natural world. Deforestation is at least as old as civilization and is specifically mentioned in Plato’s dialogue Critias. There is indirect evidence for salt buildup, resulting from irrigation, that damaged the grain fields of Mesopotamia thousands of years ago. Since the explosion of both human technology and population, our impacts have become extensive enough to alter the entire ecosystem of the Earth, ushering in a new geological age, the Anthropocene (the epoch of humans).

Nature will eventually clean up our mess. The problem is that this cleanup can take such a long time that our civilization will not be able to persist while the Earth cleans up our mess. We are like the massive dinosaurs that, at the end of the Cretaceous, required daily masses of food. When the asteroid plunged the world first into a pizza-oven fire and then into darkness caused massive disruption of food chains, life recuperated, but the dinosaurs, who could not persist through this interruption, did not.

Occasionally, however, human cultures have invented technologies that reduced our impact on the Earth. One of the best examples of this is terraces. Agriculture always causes soil erosion, the loss of the very soil on which agriculture depends. But this erosion is greatly reduced by the use of terraces. As the rain water runs downhill, it slows down on each terrace and lets the soil settle before proceeding further down the hill. Sometimes terraces wash away, but they have had the overall effect of reducing erosion. Terrace agriculture, especially of rice, can continue for centuries. 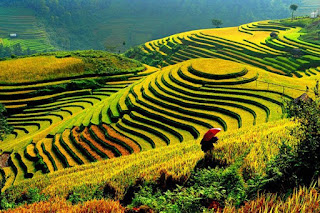 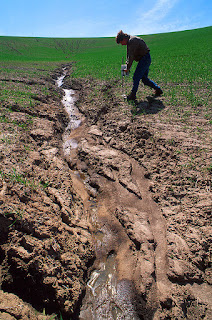 We cannot simply relax and assume that somehow human culture will solve our environmental problems. Terraces reduce soil erosion, but somebody had to invent terraces. Terraces may have been invented over and over in separate locations. It required human creativity and will.

Whoever invented terraces did not do so in order to save the Earth. They did so because they wanted to save their own farmlands from the ravages of erosion. The long-term and widespread effect was to help save the Earth.

Today, one of our biggest challenges is global warming. What can we do about it? We can invent new technologies that allow us to use less energy in order to achieve our goals or find new sources of energy that do not emit carbon dioxide. Human technological creativity has given us a dazzling array of such inventions, from wind generators to LED bulbs to solar power. 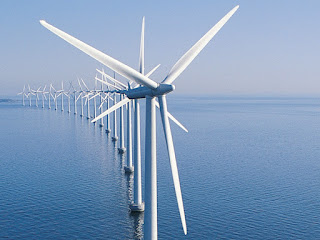 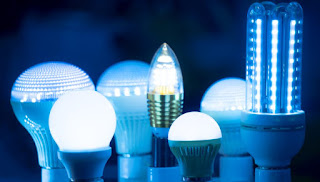 But these things do not simply happen. Somebody has to do them. And it requires an initial investment to get the technology started. In modern society this occurs best with government support of invention and application. And many countries are doing a much, much better job of this than the United States. Western European countries, China, and Japan are examples of places where the government invests heavily in new energy technology. Already, the people in these countries are reaping the benefits of these investments. That is, the taxpayers that supported these projects are seeing the benefits of their tax money. In contrast, the American government seems hostile toward alternative energy development. This has been the case for a long time. Most wind generators come from China and Denmark, not because Americans can’t invent good wind generators but because China and European countries have invested in wind generator development. This is part of a general Trump Administration hostility toward science. Republicans see basic scientific research (e.g., into ecology and evolution) as a threat to their beliefs, and they actively oppose applied research into alternative energy as a threat to the oil companies who give them so much money.

It is as if, thousands of years ago, ancient governments actively opposed the adoption of terraces and insisted on the continuation of soil erosion.

According to post-modernists, science is just a social construct. There is no such thing as truth, or at least truth that we have any chance of understanding. These scholars, most of whom are on the political left, keep trying to demolish all of science. With friends like these, who needs enemies? Fundamentalists can walk right in and say, See? Science has nothing to do with truth, which means that you should send lots of money to my Ministry so that I can pay for my whores.

One example is an article by Katherine Hayes about fluid mechanics. Entitled “Gender encoding in fluid mechanics: Masculine channels and feminine flows,” this Duke professor of literature seems to think that fluid mechanics is filled with sexism. I cannot find a link to this article, so I use a Nature review about it. She derived her ideas from Luce Irigaray, so it is not even original. She indicated that scientists feel that fluid flow is feminine. “Men have sex organs that protrude and become rigid, women have openings that leak menstrual fluids and vaginal fluids.” She concludes that fluid mechanics in general, and turbulent flow in particular, cannot be understood except from a feminist perspective.

Now, I can see that maybe behavioral studies of chimpanzees might be sexist, in which the actions of the animals are interpreted differently by male vs. female observers, but fluid mechanics?

Where do you start with something like this? I think it is sexist to say that, because women menstruate, they are better able to understand fluid mechanics. While I am no expert, I wrote an educational article about fluid mechanics (American Biology Teacher 66 (2004): 120-127). I do not feel that my protrusive organs impaired my ability to do so. Besides, male sexual organs are not solid; they engorge with...with...with...fluid!

Academics need to publish papers and there are journals that will publish anything. My favorite example was a fake article written by a newspaper reporter that mixed hematology and plate tectonics together and would have gotten it published had he not voluntarily revealed his fraud. This is especially true with online journals, but Hayes published her article back in 1992 when journals were all on paper.

Sorry, post-modernists. Science discovers truth. Occasionally there is bias, but the scientific method itself is an attempt to get rid of the bias. This is the subject of my upcoming book, Scientifically Thinking: How to Liberate YourMind, Solve the World’s Problems, and Embrace the Beauty of Science).

Besides, there might be another reason that women can understand fluid mechanics better than men. My wife just told me that she spends more time than I do cleaning the bathroom (by her choice). I suppose that gives her some insights I do not have.

I read a pre-publication copy of a book about attacks on science and on democracy, to be published soon by a company that has published two of my books. Because I do not want to give bad publicity to this publisher, I will give no further identification of the book.

The book has no overall theme, because it is a collection of essays from different authors, each one writing whatever he or she wants. The essays contradict one another. That is fine, and is part of the appeal of a multi-author edited volume. One possible theme is that both science and democracy are being attacked by the same people and for the same reason: the so-called conservatives want to control the world, and they want to brush aside or destroy any criticism they may receive from scientists. Another possible theme is that science is essential to a functional democracy: citizens without access to reliable knowledge cannot make the right decisions for running their society. Along these lines, essays range from the extremely pedantic (e.g., John Dewey would not have approved of the modern attacks on science) to leftist pot-shots, with which I agree but I would prefer to make my own rather than to read someone else’s. I may throw potshots into this blog but I try to leave them out of my books.

I see two major problems with all of the essays in this volume. First, there is the assumption that science is essential to democracy. This is true. It was certainly what the Founding Fathers envisioned, especially the very scientifically literate Thomas Jefferson and Benjamin Franklin. The first presidents, all Enlightenment figures, governed with the spirit of scientific reason, even though they were sometimes wrong. But, starting with Andrew Jackson, everything got messed up and has remained messed up ever since. Andrew Jackson despised scientific knowledge, or any knowledge at all. Even when he was shown that the Cherokee tribe had adopted the advancements of civilization, he continued to call them savages and insist that their land be taken by white people. He simply would not look at the facts in front of him. That is exactly what Donald Trump does today. Trump has a painting of Andrew Jackson in the Oval Office. To discuss the importance of science to democracy is so Enlightenment and has been an irrelevant topic in American politics for almost two hundred years.

A more important problem is that all of the warring approaches to the relationship between science and democracy, whether positivism or Popperianism or Deweyanism or post-modernism or whatever, totally ignore the evolution of the human brain. As I point out in my new book Scientifically Thinking, the human brain did not evolve to reason. It evolved to rationalize in such a way as to promote the evolutionary success of the person with that brain. The human brain creates illusions that may or may not bear any resemblance to the real scientific world. That is, without science, the human brain is open to infection by any and every kind of delusion, whether from the right or from the left. Ideas live in human brains as organisms live in habitats, and the successful ideas are not necessarily the ones that are right but the ones that, for any reason or no reason, people like.

As I plowed through all the approaches to science and democracy in this book, I wondered, which approach is right? Probably none of them.