The Role of Chance in Evolution: An Example

I just looked through a book I read a few years ago, Before the Dawn, by Nicholas Wade. It is about the insights that DNA science have provided about human evolution. Published in 2006, it is now out of date, but the ideas are still interesting.

The book does have a few flaws. At least twice, Wade admits his surprise that the genetic basis for enhanced intelligence (microcephalin and ASPM genes) appeared many thousands of years before civilization. He seems to think that any intelligent tribes would invent, and instantly adopt, agriculture and village life. What could hunter-gatherer tribes possibly need enhanced intelligence for? Everyone except Wade seems to know the answer. It takes plenty of intelligence to outwit other tribes, and to secure dominance within your own tribe, even without civilization. At least he did not go as far as Alfred Russel Wallace, who claimed that intelligence had to be divinely created precisely because primitive tribes did not need it.

But, overall, it is an interesting book. One figure in particular caught my eye: 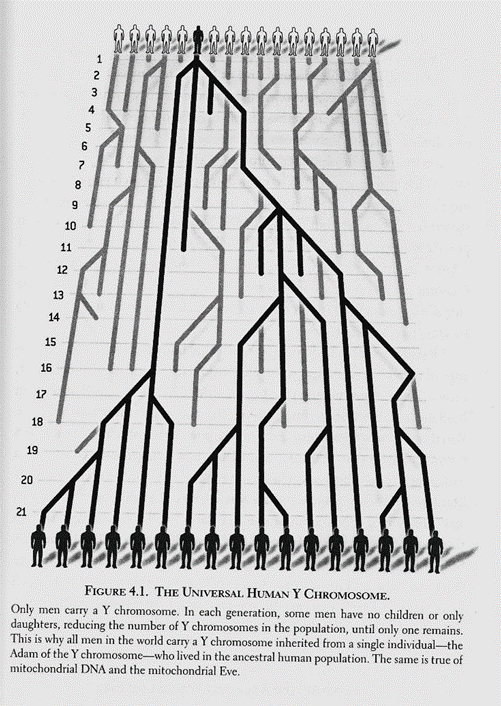 This hypothetical figure illustrates the fact that evolution is due both to natural selection and chance.

Creationists like to say that evolution is completely due to chance, so how could it produce complexity. They repeat this argument without thinking about it. Scientists point out that, while the genetic basis is produced by chance, natural selection is the opposite of chance. It chooses some genetic variants over others, thus accumulating the beneficial variants. It is chance, followed by natural selection.

But chance continues to play a role alongside natural selection. The winners in the evolutionary sweepstakes are not always the ones with the best adaptations. Any organisms with bad genes fail to propagate, but those that do propagate are not necessarily the best. The successful ones are also the luckiest. David Raup said in his classic book Extinction: Bad Genes or Bad Luck? that it was both. In sexually-reproducing organisms, gene variants (alleles) can get lost from one generation to another just due to the luck of the draw in meiosis. This is especially true for genes on the Y chromosome, passed down only through males.

The figure shows an initial population of 17 men. After 21 generations, all of the men have the Y chromosome of just one of the original men (call him Adam). Several explanations are possible.

Any of these possibilities, and others, might explain why, after 21 generations, all of the men had Adam’s Y chromosome. One could argue that natural selection would favor a man who would not only leave offspring no matter what, and could get several wives no matter what, but it is less clear that natural selection would favor meiotic drive that produces more Y sperm. Natural selection favors the whole set of genes, not just those that are on the Y chromosome (and there aren’t very many).

There are many other possible examples. One may be, why are brachiopods (lampshells), which were so common before the Permian Extinction, now rare, while apparently-similar mollusks are now so common that, according to Stephen Jay Gould decades ago, HoJo’s can feed a nation on their breaded feet. Did lampshells just get unlucky during and after the Permian Extinction?

Since Gould published this comment, HoJo’s Restaurants have faced their own extinction crisis. The last HoJo’s restaurant is in Lake George, New York, where the most common customer rating is “terrible.”) This does not appear to be due to chance. But is the mollusk domination over lampshells due to chance? Obviously, if they were inferior, mollusks would have suffered decline, but if mollusks and lampshells were similarly well-adapted 250 million years ago, chance could have tipped the balance in favor of mollusks.

There are similar examples in cultural evolution. Today, many music aficionados equally revere Beethoven and Schubert. Beethoven died famous, but Schubert was poor and unknown. Schubert apparently even fantasized that he could see the spirit of Beethoven as he was dying. At least from the viewpoint of the quality of the music, the predominance of Beethoven over Schubert was due to chance.

For many people, natural selection provides a feeling of justice in the universe. It may not be pretty, but at least there is a reason why some lineages prosper, and some do not. Darwin struggled with the spiritual implications of the “struggle for existence,” as he called it in Chapter 3 of the Origin. He wrote, “When we reflect on this struggle, we may console ourselves with the full belief, that the war of nature is not incessant, that no fear is felt, that death is generally prompt, and that the vigorous, the healthy, and the happy survive and multiply.” Did he really believe this? This was little comfort to people whose children, like Darwin’s little Annie, became the victims of the struggle for existence.

How much less comfort there is to consider that, as The Preacher Qoheleth said long ago in Ecclesiastes, “I have seen something else under the sun: The race is not to the swift or the battle to the strong, nor does good come to the wise or wealth to the brilliant or favor to the learned; but time and chance happen to them all.” [New International Version]