What's Up with the Stupid Magnolias?

What’s Up with the Stupid Magnolias?

In late September, I saw several magnolia trees blooming in Durant, Oklahoma. Magnolias are supposed to bloom in late spring! What’s up with that?

The reason the magnolias bloomed is because they are stupid. Plants are stupid. I say this even though I am a botanist and have devoted my life to studying them. These magnolias, you see, have no idea what time of year it is. They don’t know the difference between May and September.

But intelligence is expensive. Brains are expensive. Your brain uses twenty percent of your body’s metabolic energy and oxygen. My granddaughter Léna’s brain uses half of her energy and oxygen. That doesn’t make her smarter than you, but it does mean her brain is rapidly growing. Plants simply cannot afford to make brains. For the last billion years, plants and their evolutionary ancestors have relied on more direct stimuli from the environment to tell them when to do things such as reproduce. 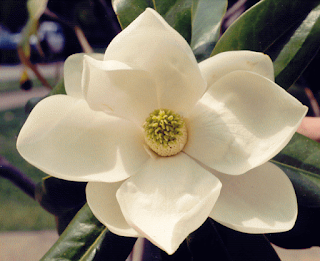 This summer in Oklahoma had some long periods of hot dry conditions. They were not record-setting, but they were pretty brutal. Then, in late summer and early fall, it rained a lot, and kept raining. Therefore, during mid-summer, the plant cells dried out, and in late summer, they became moist. For anything that the plant knew to the contrary, the summer drought was winter, and the fall rains were spring.

Plant responses to seasons are not the most intelligent ones, but they are economical. Every few years, the magnolia trees waste a few flowers by blooming in the fall; in the ensuing winter, they cannot develop their fruits. But any magnolia would tell you that its way of adjusting to the seasons doesn’t cost as much as your brain does, thank you very much.

The science of global warming is accepted by nearly all other nations and their political and economic leaders. The United States stands almost alone in rejecting modern science in this and in some other ways as well. It is certainly the only economically powerful nation whose government denies global warming. Most global warming denialist organizations are American. There is an international organization, known as Clexit (named in imitation of Brexit), which has members from 26 countries, but few if any of those countries officially deny global warming.

There is no scientific evidence that could possibly convince denialists that global warming really is happening. Not only is it a pseudoscience, but it is a religion, since most of its adherents cling to denialism with a religious zeal. Some will even go so far as to say that God will not permit global warming to occur. Senator Jim Inhofe cites Genesis 8:24 as evidence, although that verse says absolutely nothing about global warming. God is in control of the weather, he says. So I guess when powerful hurricanes keep hitting the United States and other countries as well, we need to blame it on God. Certainly not on humans. Absolutely not on Republicans.

It is not merely the scientific evidence that American leaders reject. It is the economic evidence. American leaders say that we cannot afford to make the changes that are necessary for us to reduce carbon emissions. (They are probably right; we are spending our money cleaning up after powerful hurricanes, and, soon, building a border wall.) But economists everywhere in the world, including some in the United States, claim that the cost of doing nothing about global warming will be immense. Already municipalities that are not preparing for global warming are receiving lower credit ratings, which means they will have to pay higher interest rates on loans. The reason is simple. If a city does nothing to prepare for rising sea levels and powerful storms, investors might lose their money in those cities.

Not only do most economists in the world believe that global warming is a real threat, but most believe that a carbon tax is the most sensible economic incentive to promote action. This is the belief of this year’s two winners of the Nobel Prize in Economics: William D. Nordhaus and Paul M. Romer, both of them prominent American economists. 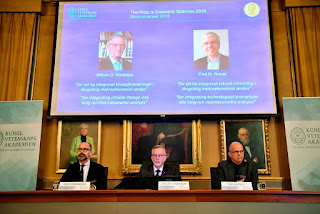 In economics as in science, American scholars lead the way in dealing with global warming. Certain large American corporations, and the politicians whom they own, however, lead the way toward denialism. Around the world, American scientists and economists are in demand (a university in China wants me to teach for them, and I am not even a prominent scientist), but the world largely distrusts the American government. According to the New York Times, Robert Stavins, head of Harvard’s Environmental Economics Program, says, “Any Nobel Prize linked with global climate change will inevitably be seen as an international critique of Mr. Trump’s outspoken opposition to domestic and international climate change action.”

The Republican Party, especially their leader who prides himself on being offensive, has begun to alienate the world. When he says “America first” he means “America only,” as if we can survive all by ourselves. French president Emmanuel Macron tried to befriend Trump, inviting him to Bastille Day celebrations last summer, so much so that commentators started calling it a Bromance. But since that time Macron has denounced Trump, using colorful language, and announced that France would not make further trade deals with America as long as it rejects the most recent international climate change agreement. I cannot find a transcript of his speech, but when I heard part of it, I clearly heard him use the word bêtise, which translates into stupidity.

We have many of the world’s best scientists and economists, but the world increasingly thinks our government is stupid. Can you blame them?

Denialism is a religion because denialists believe it so strongly that they are willing to send us into a future of economic decline and possible collapse. Republican religious zeal will take us to the end of civilization.

The Bermuda Triangle: It's a Real Gas

In the twentieth century, there was a lot of popular discussion of “the Bermuda triangle,” a triangular area of ocean roughly bounded by the tip of Florida, Bermuda, and Puerto Rico. There have been numerous instances of ships and airplanes simply vanishing without record, without remains, and without explanation. Some writers indicated that, because they could not imagine how such disappearances happened, then it must have been the work of extraterrestrial aliens.

I consider this topic, while of limited value in itself, to be a very interesting illustration of some aspects of the scientific method.

Many criticisms of the Bermuda triangle mystery claim that there is no mystery at all. Millions of planes and ships navigate through this area of the ocean without incident. The disappearances must therefore be very rare. But just because they are rare doesn’t mean they did not occur. Many of the disappearances were in the 1940s, 1950s, and 1960s, when navigation technology was inferior to what we have today. Now that we have better technology that can explain what happens to vessels that experience trouble, we no longer have unexplained incidents. Some critics attack each example and question the reliability of the documentation.

My favorite explanation for the disappearances is the sporadic release of methane gas from underneath the sediments. Decomposing organic matter in the offshore sediments produce methane which, under the pressure of the ocean water, remain in a condensed state. If the pressure is relieved, for example when the water becomes warmer, some of the methane can go back to a gaseous state and erupt from the sediments. As global warming makes the water warmer thus less dense, numerous methane eruptions are occurring in shallow waters. Take, for example, this image that was published in Science in 2017, showing craters from methane releases off the coast of Norway:

Most of these releases are small, but it is possible that some large ones occurred in the twentieth century in the Triangle. Many scientists believe that these massive offshore “burps” contributed to the Permian Extinction 250 million years ago. This illustration is from Penn State: 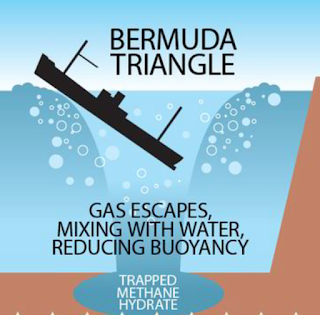 
Today, methane is monitored, and if a methane burp caused a vessel to disappear, we would know it. This was not the case in the mid-twentieth century.

This explanation is an example of something that neither critics nor believers had even thought of at the time. Sherlock Holmes was wrong. He said that, once you have discounted all other possibilities, then the one remaining possibility must be right. This is, of course, not true. Scientists and everybody else has to face up to the possibility of “unknown unknowns.” I address this topic in my upcoming book, Scientifically Thinking though I do not use the Bermuda Triangle example.

The foregoing is not an original idea. Though I believe I thought of it independently, many other people have thought of it also.

Another Useless Message to President Trump

“Mr. President, you have made many people angry at you, including your fellow Americans and our allies abroad. You are doing your best to make people hate the Republican leadership of America.

“You will never control my soul.”