Plants Don't Just Live in Habitats; They Create Them!

I have just posted a video from the scene of the action. I show some clumps of alder (Alnus maritima) growing in the Blue River in south central Oklahoma. One glance and you would say that the river is their habitat. (By the way, that habitat, with its white water emerging from the aquifer, is the nicest place to do field studies in Oklahoma in the summer—in fact, it might be the only nice place to do field studies in an Oklahoma summer.) 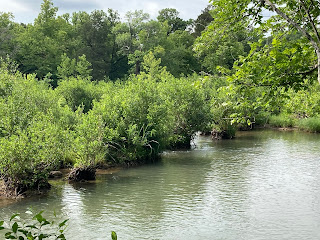 But the alders are not just growing in the river. They are creating their own habitat, in four ways.

First, once an alder bush starts growing on a rock in the river, its trunks emerge from the water. (Sometimes floods wash away the trunks; they just grow back, usually within a year.) The trunks slow the water down just a little bit. Dead leaves and stems in the river accumulate at the trunk base, as well as some mineral soil. The alder clumps are creating little islands of soil in the river that would not have been there without them. When these dead tissues decompose, the soil can nurture other plants, such as the sycamore saplings that grow up from the soil.

Second, the roots of the alders have little nodules that are filled with Frankia bacteria. Like the more familiar Rhizobium that grows in legume roots, the Frankia bacteria “fix” nitrogen; that is, they take nitrogen molecules from the air (the little air spaces in the soil) and fix it into ammonium molecules, which act as a fertilizer for the alder. It is a mutually beneficial (symbiotic) arrangement: the alder feeds the bacteria, and even protects them from excessive levels of oxygen gas. In turn, the bacteria produce more ammonium than they need. That is, the alder roots are absorbing nitrogen atoms from the inside, not from the outside. But it goes beyond this: when the alders lose their leaves, stems, and a few roots, the plant tissues have nitrogen atoms in them that came from the bacteria. But when these dead tissues decompose, the nitrogen atoms go into the soil, where it can be used by other plants, such as the walnut saplings that grow up from the soil.

Third, the roots of the alders have mycorrhizal fungi growing in them. This is what makes them fat and orange rather than skinny and brown the way most roots are. The alder feeds the fungi, and in turn the fungi extend their filaments out into the soil and absorb phosphate ions more effectively than could the roots themselves. It is a mutually beneficial (symbiotic) arrangement: the alder feeds the fungi. In turn, the fungi absorb more phosphate than they need. That is, the alder roots are absorbing phosphorus atoms from the inside, not from the outside. But it goes beyond this: when the alders lose their leaves, stems, and a few roots, the plant tissues have phosphorus atoms in them that came from the fungi. But when these dead tissues decompose, the phosphorus atoms go into the soil, where it can be used by other plants, such as the dogwood bushes that grow up from the soil.

But wait, there’s more! Fourth, the mycorrhizae of one alder clump can connect with those of another alder clump, causing the whole alder woodland to form an interconnected whole. They can share nutrients and even send signals to one another. This is the “wood-wide web” that Suzanne Simard first wrote about in 1997. The individual alder clumps create their own individual habitats in three ways, and a collective habitat in a fourth way. How cool is that?

Save the Elephants! Maybe

African elephants are the flagship “charismatic megafauna” of conservation fundraising efforts, perhaps second only to giant pandas. The efforts to save the elephant have included confining them in wildlife reserves and protecting them.

But even well-intentioned human efforts often backfire. By crowding them into wildlife reserves, we have created high population densities for the elephants. Each elephant can run over, chew up, and kill 1500 acacia trees. When confined in a small area, elephants can devastate the acacia trees—upon which they depend for survival. And protecting them from hunting makes these dense populations grow even larger. 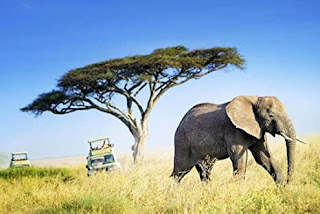 The acacias also depend on the elephants. Weevils infest acacia seed pods and can kill practically every seed in them. But if an elephant eats the pods before the weevil grubs hatch, the grubs die and the seeds survive, to sprout on a nutritious dung heap once the elephant is finished with them. But acacias cannot benefit from this vital service of the elephants unless there are not too many elephants.

My point is simple: once we mess up the natural balance, it is very difficult to figure out what to do next.

Science as THE way of knowing

I am not referring, of course, to the subject matter of science. I refer to the scientific method, about which I wrote my most recent book, Scientifically Thinking. 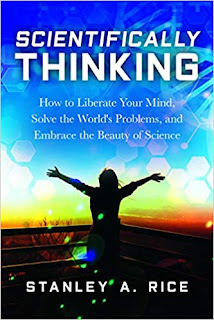 I have had positive and exciting responses to this book. One email that I received is typical:

“[I am] an astronomy PhD student in UC Riverside. I read your fantastic book (Scientifically Thinking) and all the way during reading the book I was like: This book is really great! I think this book can be and is a life-changer and savior for many of us, regardless of the field of study and career. I feel I am a better person after reading this book. That's why I recommend it to everyone I know and even don't know: last time I recommended it to a stranger in a playground who was trying to raise his little son a better person that himself!”

However, one reviewer (who was otherwise rapturous about how much he loved the book) accused me of being a scientific imperialist. How dare I say science is the only way of knowing? He said this was dangerous.

Science, as a profession, confines itself to repeatable and measurable data. The scientific method, however, can be applied to other kinds of observations that are not physical. What the scientific method allows you to do is to, as much as possible:

These are characteristics that all kinds of thinking, including philosophical and religious, need to have. (Note that many fields of study outside of science—such as history—do in fact use data that are physical. Music is grounded in the physics of sound and in the psychology of the human mind. Psychology, in turn, is based on physiology and evolution. Literature is also based on psychology and evolution. As I use the term, science may include all of these fields of experience.)

If a religious person makes a claim, there must be something other than his own craziness that can support it. At least, find it in the Bible before blurting it out. While finding a Bible proof-text does not count as scientific thinking, it is better than the kind of craziness that we see around us today. Christian fundamentalists wave their Bibles in the air without reading them.

While I consider science to be the way of knowing, it is clearly not the only way of experiencing. I have had numerous and powerful religious experiences, both when I was a fundamentalist Christian, and now when my views are less defined. When I listen to music, I do not think about music theory; I am swept away by a rapture that is not unlike religious experiences that I have had. Earlier, I reviewed The Forest Unseen by David George Haskell. He studied his little patch of forest floor scientifically, but his experience was strongly influenced by Buddhism (he kept referring to the spot of land as a mandala).

And while I now question the historical reliability of the “stories of Jesus,” I am irresistibly drawn to them; I continue to write about them in my fiction and use Bible quotes even in my science classes. To me, Jesus is real, even though it may all be inside my head. I love this guy. I just don’t claim this to be knowledge; it is experience.

As I close, I must mention a source of bias in my views. I have, on several occasions, been duped by religious cult leaders. One was Garner Ted Armstrong. I was also swept into a Church of Christ cult for many years. My faith was more powerful than any experience I have had before or since. It was strong enough that I ignored contrary evidence, such as the verified news that Garner Ted was having illicit affairs with undergrad women at his college. With a history of such vulnerability to cult-thinking, how can I trust anything that is generated solely within my brain? I’m just speaking for myself, but I’ll bet you have similar vulnerabilities. I need to test my beliefs against evidence.

The distinction between knowledge and experience is particularly crucial today, when millions (not many millions, I hope) of people believe that everything Donald Trump says is as infallible as if God Himself had said them, and that there is a totally secret conspiracy that stole the election from Him. Few of them will go as far as Marjorie Taylor Greene, who claimed that mass shootings were all fake, and that the California wildfires were started by a satellitefinanced by Jewish money, but many of them use their religious delusion to claim that the coronavirus pandemic is a hoax and that we should neither wear masks nor get vaccinated. At this point, treating religious experience as if it is knowledge has become a public threat.

That is, I get upset when I see people using religion as a basis for believing and doing terrible things, which is something that I almost did as well. I am reacting in horror to what I might have been, as well as to what they are. That is my bias but, I think, a reasonable one.

Scientific thinking, not necessarily science, is THE way of knowing.