Global Warming Denialism: What Fundamentalists Are Forcing God to Say

Fundamentalist Christians insist that, since God controls the seasons and the weather, there is nothing that we can do to alter it. This is the basis for their insistence that, no matter how much carbon dioxide we release into the atmosphere, global warming will not occur unless God wants it to. That is, if God has decided that global warming will occur, then it will occur even if we totally cease all carbon emissions; and if God has decided it will not occur, then we can pour all the carbon we want to into the air and nothing bad will happen.

The fundamentalists base this belief upon Genesis 8:22, in which God tells Noah right after the big Flood, “While the Earth remains, seedtime and harvest, cold and heat, summer and winter, day and night, shall not cease.” This verse does not say that global warming will not occur, so long as the seasons continue. There are no scientists who say that global warming will cause seasonal and geographical differences to cease to exist. But to fundamentalists, this verse means that God is in charge of climate and seasons, and that whatever happens on Earth is whatever God has already planned. We cannot reduce global warming by driving smaller cars, nor can a rich televangelist make global warming worse by flying around in a private jet.

This would be a laughably trivial matter except that it is the principle upon which the Republicans who are largely ruling America believe. The most famous global warming denier, Oklahoma Senator Jim Inhofe, has said that, because “God’s still up there,” the “arrogance of people to think that we, human beings, would be able to change what He is doing in the climate is to me outrageous.” 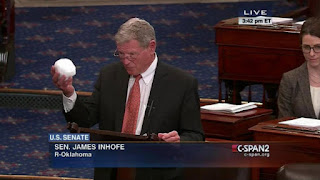 But the Bible also suggests in several places that God is also in charge of your lifespan. God has already decided how many days you are going to live, and there is nothing you can do about it. The verse that says this most clearly is Psalm 139:16, in which the psalmist records words he attributes to God: “Your eyes saw my unformed substance; in your book were written, every one of them, the days that were formed for me, when as yet there were none of them.” Fundamentalists usually use this verse to prove that an “unformed substance” (an embryo) is fully human (“my” unformed substance). Almost in passing, they acknowledge that this means our days are numbered.

Elsewhere, Jesus says that the hairs of our head are numbered. I remember listening to evangelist Garner Ted Armstrong on the radio telling us all that his hair was falling out, and that if he counted them, he could calculate the exact date on which he would become bald. He seems to have been unaware that, in most cases, when a hair falls out of a follicle, a new one grows back.

Perhaps “numbered” just means “limited”? The hairs of our head, and the days of our lives, are finite, and we should be mindful that we will not live forever, and we had better get our lives in shape before it is too late. This is a good interpretation, but is not a fundamentalist one. The psalm says, regarding “the days that were formed for me,” every one of them. Each day of our future was written individually in God’s advance plan. In another psalm, the psalmist said that our lifespan was limited to 70 years (or, he concedes, maybe 80). I knew someone who literally believed he would drop dead on his 70th birthday. But most fundamentalists would say that only God knows how many days we will live, and each one of us has a different number of days. This assertion is scientifically untestable (how could you ever prove that someone died on a day different than the one written on God’s secret list) but seems to be a straightforward literal interpretation of Psalm 139:16.

If fundamentalists then took this verse one step further, they would have to conclude that your number of days is predetermined, no matter what you do. Don’t bother with eating healthy food; go ahead and drink and smoke; don’t worry about hiking or walking, just go ahead and sit on the couch and listen to televangelists and Fox News all day, because it won’t make any difference. Eating vegetables will not make you live any more, and eating fat and sugar will not make you live any fewer, days. Fundamentalists generally do NOT take this interpretation. Instead they say that God made your body and you should take care of it, at least a little bit.

If God is in charge of the climate, and He is also in charge of your lifespan, why do fundamentalists tell us there is no point in working toward planetary health, but that it is important to work toward personal health? I think there is only one possible reason: they are using Genesis 8:22 as an excuse to ignore, or even be hostile toward, the science of climate change. Their fundamental beliefs therefore appear to be, “God is in charge of everything except when He isn’t,” and, “God’s truth is whatever the Republican Party says that it is.”

A Message I Sent to President Trump

This past week has been a banner week for global warming. We finally understand that President Trump has Godlike powers even over the weather. So, we have nothing to worry about. Trump will protect us from the consequences of global climate change.

Here is the email I sent to the White House:

I wish to praise you for your Godlike power, wisdom, and ability. Many Christians worship you, but I have hesitated to do so. Perhaps I should reconsider. Last week you told global warming to come back, “we need you.” And it did! In Oklahoma, where I live, it was 20 degrees, and very soon after you spoke your holy words, the temperatures increased to almost 80. The very weather obeys you! How can anyone, now, deny your Godlike power?”

I assume nobody on the White House staff will read this, certainly not Trump.

Another reason this is a banner week: Trump is appointing one of America’s most famous climate change deniers, John Christy, as his science advisor. Christy vigorously maintains that, because of his Christian faith, he will never believe that global climate change is occurring. But now he might have to reconsider whether it is God, or Trump, who controls the weather. 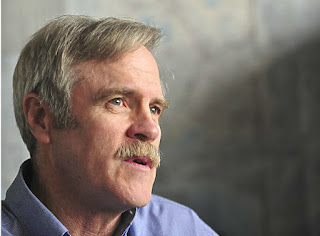 Even if he does read this, I doubt that Trump would catch the sarcasm.