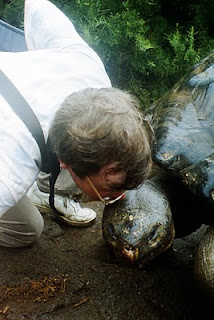 If the world was one big habitat, the expert species would rule. There would be lots of species but not much room for newcomers. Because of islands, there are spaces for newcomers, like coffee house performers not having to take on Hollywood. And once in a while, new talent emerges from such islands and changes the world.
Posted by Honest Ab at 8:18 AM No comments:

Evolutionary scientists are not very good at predicting the future. They are very good at reconstructing and explaining the past.

Reconstructing and explaining the past is not as easy as it seems. Evolution has resulted from natural selection—but natural selection has acted differently on every group of organisms, and in every part of the world, and at different rates. There have been countless examples of historical contingency, as Stephen Jay Gould liked to remind us. Genetic drift and the founder effect, among other things, produced unique and unusual sets of genes upon which natural selection acted. Natural selection can only act on whatever genes are available. The story of natural selection is therefore millions of stories.

This is why evolutionary scientists cannot predict the future very well. In the past, evolution has taken millions of directions—and it will presumably keep doing so. We cannot predict the conditions of the future, nor the contingencies (accidents) that may determine which populations will be at the right place at the right time to explode into a new and dominant evolutionary lineage. When scientists try to predict the future, they make it clear that they are using their imaginations, rather than the scientific process (for example, Future Evolution by Peter Ward and Alexis Rockman). Japanese film maker Akira Kurosawa (in his movie Dreams) imagined a post-nuclear-war world with giant dandelions and people who grew horns, which was a mixture of science fiction and traditional Japanese legends.

Just because there are a million directions evolution can take does not mean we cannot make reasonable guesses about some of them. I invite your comments about what you think some of the future directions of evolution might be.
Posted by Honest Ab at 12:31 PM No comments:

I teach and write books about evolution. I also write fiction. I have published little of it, in magazines that were obscure before becoming extinct. My fiction is sometimes about evolution (about Neanderthals, or about Homo ergaster hiding in Madagascar), but usually not. What overlap is there, then, between my two spheres of writing? Is fiction just an escape?

No. There is plenty of science even in the fiction that is primarily about something else. First, all of my fiction is pervaded by the awareness that all of the action is taking place in a scientifically-comprehensible universe. In this sense, I like to think that my writing resembles that of the late John Updike. He read about science, and was particularly interested in Mars (he wrote about it for National Geographic and has appeared in Best American Science Writing 2004). His novels and stories were never, as I recall, about science (a minor character in Couples was a scientist who studied photosynthesis); they were usually about networks of people having sex. But particularly in his later works the science showed through. In his millennial novel Toward the End of Time, the narrator (of course, a lecherous older man) walked toward the bathroom in the middle of the night, seeing light through the slit of the bathroom door—and it reminded him of the photon slit experiment that showed the dual nature of light.

In this regard, my bête noir is writers who are almost proud to know nothing about science. I have encountered two instances in which a writer thought that thunder traveled faster than lightning. I don’t expect writers to be able to recite the Central Dogma in Latin or anything, just to know that light travels faster than sound.

Second, a good story is the product of natural selection. The characters and events have to work within the environment in which they take place. The events and the characters are designed by the author, but they have to work in a natural fashion. The environment has to be internally consistent, just as our planet has reliable laws. Even if it is not an Earth environment, it has to have natural laws, as Middle Earth did. And the characters have to interact in a way that makes sense, just as do individuals in populations and species in ecosystems. Good writers can tell if something is working or not, even though they do not explicitly call it a scientific test. They usually call it something like a bullshit-detector, which was Hemingway’s term (as I recall). My favorite example of a writer whose novels simply do not work is John Darnton (Neanderthal; The Darwin Conspiracy). Contrast this with Greg Bear. His version of evolution is all wrong, but it is consistent in his created world.

What examples can you think of?
Posted by Honest Ab at 3:00 PM No comments: