Altruism: The Third Alternative for Ecology and Evolution

Consider the following to be my holiday message to you. It is adapted from an essay I wrote for my website.

I recently read a book entitled The Penguin and the Leviathan, by Yochai Benkler, a leading scholar in business research. I have read many books about altruism, many of them by scientists such as Frans deWaal (The Age of Empathy), Dacher Keltner (Born to Be Good), and Martin Nowak (Super Cooperators). These books repeatedly make the point that individuals within animal species, individual humans, and businesses can profit from being nice and generous to others. Altruism, rather than violent competition, is the most important component of “the law of the jungle.” Just ask any of the chimps that deWaal has studied. The way to the top is primarily through cooperation, not violent competition. Even apes understand this. Benkler’s book is published by Crown Business, a division of a major New York publisher. Its intended audience is not science buffs but business leaders. In the title, the Penguin is Tux, the icon of Linux, whose business model is cooperation rather than top-down command, and the Leviathan is the cynical view of life presented centuries ago by Thomas Hobbes.

Benkler, though not a scientist, has done a very good job of summarizing the evolutionary science of altruism. But the thing that opened my eyes the most was that Benkler presented altruism as a third alternative for how a society could operate. The other two ways are state control and free market. We usually think that these are our only two choices. But, as Benkler explains, this is not true.

Both state control (as exemplified by dictators on the political right or the political left) and free market economics operate from the assumption that humans are fundamentally selfish. State control attempts to force people to not be selfish. The free market tries to capitalize upon those utterly selfish economic machines known as humans. But Benkler points out that altruism is a fundamental instinct of the human mind. As Michael Shermer said, it feels good to be good; humans enjoy being altruistic. Altruism motivates much of what we do.

Our only hope, from Benkler’s viewpoint, is to build our society and economic system in a way that facilitates altruism. Governments should not try to solve all social and economic problems by law and by creating big agencies; governments should be (in my words) conduits of the altruism that already exists in people’s minds. Governments should be altruism enablers. Similarly businesses should embrace altruism, appealing to their customers’ instincts to want to create a better world for everybody. Customers are selfish, but also altruistic. Customers are increasingly offended by corporations that display conspicuous selfishness; that assume the customers are merely selfish; or that use little greenwashing gimmicks to make themselves look environmentally friendly or socially altruistic. We customers are not stupid, nor are we totally selfish. We are (some of us more than others) partly altruistic and we expect our governments and businesses to also be altruistic.

Benkler makes the point that right now, when dictatorships are falling and the free market has proven ineffective enough that it has shaken the very faith of Alan Greenspan himself, is the time when altruism has a chance to influence the very structure of the economy and government. Governments and business CEOs have been good only at spending money, with disastrous consequences that nobody can ignore any longer.

Altruism, perhaps the greatest gift of evolution, is also the only way to solve our environmental problems. Neither of the other alternatives, government fiat or the profit motive by itself, have significantly deflected our worldwide momentum toward ecological disaster.

Joy to the world? Altruism? Maybe. 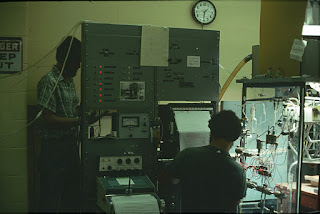 This is just a brief note to say that, in this blog, I will attempt to stay “on message” about evolutionary science and related subjects. Inevitably this will take me often into politics and religion, which would not happen if politicians and religious leaders would just focus on their own fields without trying to use evolution as a whipping boy to pick up votes and donations.

I assumed that other evolution blogs would do the same. I was disappointed to see, in August 2011, that Jerry Coyne’s blog was taken up by lots of photos of impressive architecture around St. Petersburg, and even the long-running and respected blog Panda’s Thumb is frequently used for just posting pretty sunset photos. P. Z. Myers’ Pharyngula blog also seems to wander around quite a bit. Nothing wrong with these things, and Jerry Coyne is one of the leaders of modern evolutionary thought, but my intention is to make this blog a useful place for you to learn about evolution. I hope you send your friends to my blog for useful information about evolution. See also my website, where I have a section with lots of photos, but rather than just being pretty sunset photos, they are photos with stories to tell about evolution and biodiversity.
Posted by Honest Ab at 1:42 PM 1 comment:

So the Appendix Isn’t Worthless After All

The vermiform (“wormlike”) appendix is an extension of the human large intestine. It is homologous to a part of the caecum of other mammals. Humans (and cats) are among the most finicky eaters in the mammal world. Humans use intelligence to choose foods that are safe and nutritious to eat, at least we did so under the prehistoric circumstances in which our bodies evolved. But most mammals, particularly herbivores and omnivores, just eat stuff, and rely on their intestines to process the food. Dogs just gobble things down. As for cats, which are not necessarily any more intelligent than dogs, I do not know why they are finicky. (One of our cats once ate a ribbon off of a Christmas tree, not an impressive example of intelligence.) An important part of intestinal food processing in most mammals is the caecum, in which bacteria break down many otherwise indigestible food materials. Humans have big brains and small caecums; most mammals have smaller brains and larger caecums; once again, I have no explanation for cats. In humans, part of the caecum has degenerated into the appendix, which really does look like a worm, and is not large enough for any significant amount of food to enter. It is a dead end tunnel off the side of the intestine.

The human vermiform appendix is largely considered to be vestigial and worthless. But it turns out to not be entirely worthless. Sometimes disease bacteria multiply in your intestine, and drive out the good bacteria that normally live there. Then the disease bacteria eventually die away, if you are lucky. Eventually the good bacteria return to their intestinal home. But where do they come from? Apparently, many of the good bacteria hide in the little appendix corridor, and emerge after the bacterial war is over. The appendix is therefore a refuge for good bacteria. This is particularly important for modern people who take oral antibiotics, which devastate the bacterial populations in the main part of the intestine, but not on the appendix.

But even though the appendix is not worthless, it is still vestigial. It is reduced in size and function compared to our mammalian ancestors. In humans it no longer serves a digestive function. It has degenerated over evolutionary time, though not far enough to have become worthless. It remains today, as in Darwin’s day, an excellent example of a vestigial organ.