The Evolution of an Evolutionist 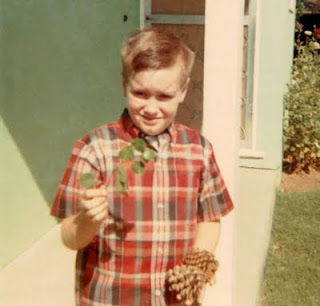 Let me tell you briefly how I became an evolutionist. I'd be delighted to hear brief stories from you about your experiences as well.

I started off as a creationist, as fundamentalist as they come. This lasted through my undergraduate days as a biology major. But I gave up these beliefs for two reasons. First, I kept learning more science. I found out that the creationists I had believed were wrong: there is lots of evidence for evolution, from DNA to fossils. Second, and this may surprise you--I kept reading the Bible. And I finally realized that a literalistic interpretation of the Bible just didn't work. So I would encourage creationists to do as I did--read the Bible for yourself, don't just believe what preachers tell you about the Bible. This may very well lead you, as it did me, to a figurative (literary) interpretation.

My evolution was partly gradualistic, and partly punctuated equilibrium. I gave up creationism in stages (gradualism). But there were certain memorable points in time when I had important insights about both religion and science (punk eek). I'll tell you about them sometime.

I have always been a great lover of nature. Hiking in the mountains and riding my bike in the country inspired me when I was young. At first, my admiration was framed in a creationist praise of a Creator who made everything exactly as it was. But I gradually realized that, if God made it exactly as it was and without the ability to evolve, then the world was not built to last. If life does not evolve, it will come to a crashing demise when the environment changes, as it always does. To a fundamentalist, this is no problem: they believe that any minute now Jesus will come back and destroy the world, including nature. I always had trouble with this, even in my fundy days. But I realized that, without accepting evolution, I had to see the natural world as NOT BUILT TO LAST. This seemed to me to be an insult to God.

More later. Let me know what your experiences have been.
Posted by Honest Ab at 9:25 AM 2 comments: 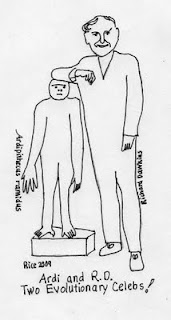 The two big evolution celebs this week are Ardipithcecus ramidus and Richard Dawkins (Ardi and R.D.). Ardi is the skeleton of a woman who lived about four and a half million years ago. She was about a meter tall, and walked upright. However, her foot had a thumb-like big toe that allowed her to grasp branches. Therefore this species was perfectly intermediate between four-legged life in the trees and two-legged life on the ground. A missing link that lived exactly where and when we would expect her to, and look like what we would expect, during human evolution in Africa.

Meanwhile Richard Dawkins completed a book tour (to promote "The Greatest Show On Earth") in the United States and once again had huge crowds.

Please comment on your reaction to either of these celebrities.
Posted by Honest Ab at 8:54 AM 1 comment:

Welcome to "Honest Ab," a blog about evolution and related topics--that is, almost anything. Nearly every aspect of life is related, somehow, to evolution. Prepare to be surprised. Recurring posts will include "What's new in old evolution?" and "What has evolution done for you lately?" and "We are not amused." I am Stan Rice, a professor at Southeastern Oklahoma State University, a rural university in Oklahoma, which makes me something of an evolution missionary, I guess. I am the author of Encyclopedia of Evolution and other books. My website (with book information and environmental essays) is "A Quiet Stand of Alders."

So, who is Honest Ab? "Ab" refers to the weed Abutilon theophrasti, which I used in my thesis experiments a long time ago. It is a beautiful but irritating little relative of cotton and hibiscus. I call myself "Honest Ab" not only for this reason but because I want to take an honest view of evolution and modern life, both human and nonhuman.

I will be particularly interested in hearing your responses to the news items, large and small, that will be appearing in this blog.
Posted by Honest Ab at 8:31 AM No comments: