Christians burning Bibles? You gotta be kidding me. But no. It was for real. Well, almost. The day that Amazing Grace Baptist Church was going to burn books, it rained, and they had to go inside. Also, fire laws prevented them from burning books, so they just tore them up instead. You can read about it, and see a video, here.

I do not know what all the books were that they tore up. I would have been honored if it included my Encyclopedia of Evolution. I know it included The Wizard of Oz. And it also included the Living New Testament. You see, this church believes that the only inspired word of God is the King James Version, published in English in 1611. Did Jesus or anyone he knew speak English? No. And I suppose Jesus could not have known that his words were unauthorized until King James authorized them 80 generations later.

Obviously these people were not using any kind of reasoning at all when they tore up a Bible that was a different translation from the one that they believe. The Bible cannot present any reasonable argument that the Bible should be torn up. Were they brainwashed? If not, pretty close to it.

And it is this type of mindless rage that is directed against evolutionary scientists by fundamentalists. Obviously you cannot reason with them or with anyone who is lured by them. All you and I can do is to present the truth and live honestly.
The event at Amazing Grace Baptist Church included a fried chicken dinner with all the fixins. I guess that is what they think God will serve on Judgment Day when every evolutionist, every moderate Christian, and all those martyrs who built their faith upon scriptures that were written before 1611 are thrown into an immense Barbecue of Fire.

Individuals in many species have “kin selection” altruism—being nice to other animals that share many of their genes. Some scientists even claim to see it in bacteria, which form altruistic multicellular structures known as biofilms (or slime). And you will find direct reciprocity in many intelligent animal species—one individual helping another, with the expectation of receiving help in return. This type of altruism requires enough intelligence to remember which other animals are reliable altruists and which are cheaters, allowing the cheaters to be marginalized. But it is probably only humans that practice indirect reciprocity, the type of altruism where an individual gets social status for doing nice things to other individuals who will never be able to repay. Natural selection has not only favored indirect reciprocity in humans, but also the emotions that accompany it. That is, in humans, the normal condition is that it feels good to be good, at least to others in your tribe. Throughout recent human history, we have been expanding the horizons of altruism, so that now it feels good to help people who are far away.

Recently, when my wife and I were out walking, we ran across a perfect example of altruism in action. A church youth group was painting over gang graffiti. They were clearly enjoying the work and the knowledge that it was appreciated by the neighborhood. The leaders were particularly happy that they had painted over the graffiti within 24 hours of its origin. They also enjoyed the thought that they were serving God by doing this.

The group was associated with the ministries of Oral Roberts, the preacher who is famous for having sweet-talked thousands of people (including my wife’s paternal grandmother) out of millions of dollars. The Oral Roberts dynasty revels in its wealth, which includes a private jet. For awhile, the privileges included access to the resources of their university, back before Oral Roberts’ son Richard was forced from the presidency of that institution. (I was recently told by a reliable source, but who must remain anonymous, that the jet that Richard Roberts used had marijuana and pornography on it. This information came from a relative of a security officer at Oral Roberts University.)

Here we see loving altruists helping the neighborhood, and helping young people at the same time, but they are also giving money to big-time parasites. It creates in my mind an image of Jesus hauling his cross to the hill while a big fat pope sits on his shoulders.

Have you seen other examples? Of course, from the realm of religion, there are almost more examples than you can count. Perhaps examples from the business world? I can certainly think of examples from my profession (education).

Natural selection is only a breath away

Natural selection is always right at your elbow, ready to remove some of the variation from the population, and that variation might be you.

It was almost me in 1993. It had been a very moist spring, and the mouse populations in much of the country had exploded. It was my first summer to teach field botany and environmental science at the Wheaton College Science Station uphill from Rapid City, South Dakota, in the Black Hills. I did not know that there was anything unusual about finding mouse feces in the bedroom drawers when we opened the cabins from their winter dormancy. I just assumed that was what always happened. I cleaned out the drawers without taking any particular precautions.

A couple of weeks later, the news broke about the Hantavirus that killed healthy young Native Americans in the Four Corners region, a relative of the Hantaan virus that had killed American soldiers in Korea during the war. The Four Corners victims inhaled dust that had virus from the feces of the very species of mouse that had overwintered in my cabin. Perhaps the droppings in my cabin had not been dusty; perhaps the mice were not infected; or perhaps it was just blind luck.

I am not talking about the Darwin Awards, in which people suffer severe consequences for stupid acts. (The Darwin Awards claim to be natural selection in action, but this is not true, as I explain in my Encyclopedia of Evolution.) I am talking about things that normal people do, and are avoided only by dysfunctionally cautious people, the ones who imagine germs everywhere. They have a point—germs, and all other threats to survival, could be anywhere.

As I will explore in later entries, evolution is not a march towards perfection. It is the survival of the luckiest—perhaps because of their genes, and perhaps not.

When was your last brush with natural selection?
Posted by Honest Ab at 3:08 PM No comments:

Here is one of my favorite quotes, which will remind us why it is important to work against the anti-scientific voices of unreason:

Voltaire
Posted by Honest Ab at 8:43 AM No comments:

This is the third and final blog entry about Randy Olson’s book, Don’t Be Such a Scientist. Randy’s final point is that, when we tell people (especially audiences) about evolution, we need to be nice. Communication experts have repeatedly shown that audiences and voters are attracted to the person who seems nicer. Consider when an Intelligent Design advocate appeals to the fairness of “letting both sides be heard, it’s the American way.” Never mind the fact that one of those sides was artificially manufactured by the Intelligent Design people. It appeals to people. If an evolutionary scientist responds in anger or even slight impatience, many people will tune the scientist out.

I am afraid that this is true, based on my own experience. I have been successful at reaching my students sometimes, and sometimes not. The successes were (as I wrote before) when I presented Darwin as a human being. It was this approach that made a success out of an event almost guaranteed to fail—Charles Darwin showing up in person for a question/answer session, open to students and the public, in rural Oklahoma.

But one thing leaves me confused. If niceness is so important, how can we explain the phenomenal appeal of some of the meanest people you could ever imagine? One example is Rush Limbaugh. He openly insults anyone who disagrees with him. His followers love it. His followers remain faithful despite flagrant hypocrisy, such as when he denounces drug abuse, not unlike his own addiction to oxycontin. But, you will notice, Limbaugh does not insult his followers (“dittoheads” is considered a compliment, not an insult). Limbaugh, like limburger cheese, repels most people, but rewards some. This same explanation, however, fails to work (in my opinion) for Ann Coulter. Is there anything she has said that is not with a snarl and a tincture of anger? What is her problem? Even her admirers think of her as a witch in a black dress.

So perhaps niceness (to the audience or readership in general) is not so important after all to the conservative culture in America. But, do scientists have much chance of reaching and teaching these people anyway? Perhaps our audience (for you evolutionary scientists and non-scientists) is the nice part of American culture, who can only be reached by niceness. With any luck, the nice part of our culture is a little larger than the mean part. That’s our only reasonable target.

I recommend Randy Olson’s “Don’t Be Such a Scientist.” It will give you some things to think about.
Posted by Honest Ab at 9:03 AM No comments: 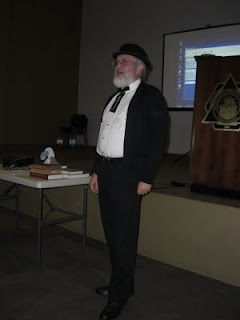 Let me know more of your experiences.
Posted by Honest Ab at 11:22 AM No comments: