The Capacity for Evil 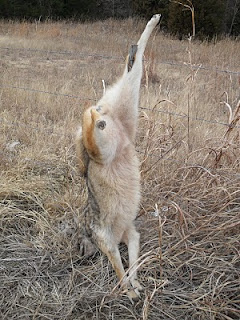 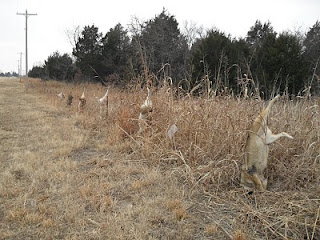 I have frequently written about the importance of altruism in the evolution of the human species. We are the most altruistic species that has ever existed on Earth. We do not have kin selection as strong as that of bees, but we make up for it with indirect reciprocity, in which individuals gain social status by being conspicuously generous.

But we are constantly reminded of the dark side of human nature—how humans can exult in destruction and torture. Under certain circumstances, such as in Bosnia in the 1990s and Sudan in the 2000s, this capacity for evil can emerge in an insane fashion. But it is always there. What we must do is to starve it as much as possible, occupying our minds with good things.

In rural Oklahoma, where I live, some people are cultivating the enjoyment of evil. When I was driving along the highway, I saw a fence line on which half a dozen coyotes had been impaled. I stopped to take photos, two of which I share here with you.
I hope you find these photos as deeply disturbing as I do. Now, it may be necessary to cull a coyote population. But there is no need to put them gruesomely on display. Of course the coyotes were dead before they were impaled (I think). But there could be only one reason for doing this: the hunters relished the fantasy of torturing animals, and wanted to make a proclamation to anyone who was driving down the highway. And what is that proclamation? They want everyone to know how much they hate the natural world. Many of these rural people are creationists, but they apparently think that God made animals so that we could enjoy torturing them. Remember this is the state in which a law against cockfighting barely passed.

We would like to think that these people who fantasize about animal torture make an absolute distinction between animals and humans—which their creationist beliefs tell them to do. But I am not entirely confident of it. When they get really mad—and the conservative political movement encourages them to do so as frequently as possible—they might take thoughtless action and do something that they would not rationally choose to do. Might their rage spill over into cruelty against humans?

I hope that my fears are excessive (and I do not sit around thinking about them). But January 31 was the 135th anniversary of the law that forced all Native Americans onto reservations. It was not long ago when some of my Cherokee ancestors were considered to be not very different from coyotes. For black people, the memory is even more recent. In east Texas, in 1998, a black man was dragged to death behind a pickup truck.

These same people believe that Jesus will return and usher in a battle of Armageddon in which millions will be tortured and the earth will literally run red with blood; one radio evangelist said it would be literally as deep as the shoulders of horses. The Jesus whom these people worship is a demon who loves to exult in torture. Of course, this does not resemble the Jesus of any part of the Bible other than the book of Revelation, which should be torn out and thrown away. And of course the Armageddon blood will be human, not coyote, blood. Before you say it can’t happen here, think carefully. I hope that, in fact, it cannot.

Evolution has given us a spectrum of options, from altruism at one end to torture at the other. In my writings, I emphasize the former; but many creationists in rural Oklahoma seem to focus on the latter.
Posted by Honest Ab at 10:14 AM