I have begun a journey to California and back, during which I will be visiting sites of evolutionary interest. I will be making Darwin videos about these places, which I will post soon on my YouTube channel. 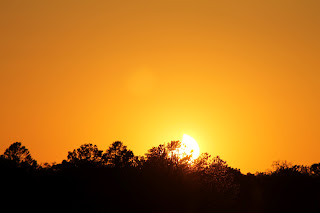 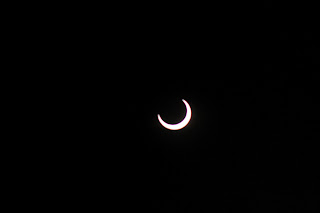 Evotourism is a new concept, which may someday draw attention among science-literate tourists the same way ecotourism now does. I am looking into the possibility of leading evotours, and my first step is to visit or revisit sites of evolutionary interest and make videos of them.

Until just three days ago, I was not planning to include the eclipse of the sun in my tour. Then I read that the eclipse would be seen clearly in New Mexico, and I knew I would be going through New Mexico as part of my trip. So I rearranged my schedule to be in Gallup, NM on May 19, to watch, photograph, and, if possible, make a video of the eclipse, which was to occur at 7:30 mountain daylight time.

I left my motel room about 6:00 and headed south on a state highway, expecting to easily find a place to pull off to the side of the road and set up my telescope and my camera tripod. This turned out to not be so easy to do. I wanted a clear view of the horizon, but there were few places from which I could do this. And almost the only side roads, off of the state highway, were private ranch roads with cattle guards. The residences did not look like the kinds of places that would welcome loiterers even outside the fence.

At last I found a side road of a side road with a church sign, and a little dirty spot to pull over. To my surprise, when I set up the telescope, I discovered the eclipse had already begun a little before 7:30. The disc of the moon was approaching from the lower right. I quickly set up my camera and took still photos and took some videos, which I tried to narrate despite the occasional cars whooshing down the country highway. For a perfect moment I saw the annular eclipse—the moon forming a perfect black disc centered in the sun. It was impossible to take photos or videos of the eclipse without the filter, and therefore nothing else was visible—until right at sunset, when the moon had nearly passed to the upper left, when a sun with a big bite taken out of it nestled down into piñon branches.

What I narrated about was that humans used to think that gods or demons caused the sun to darken and the moon to turn to blood (eclipses) and the starts to fall from the sky (meteors). This is the language used in the scriptures we still revere. The scientific view of nature, starting with Copernicus and Galileo and other astronomers, and continuing with physics and chemistry and biology, and finally the evolutionary understanding of humans and even the human brain, has shown us that the universe is not full of demons but that we are a part of its natural laws. We are at home. I did not express this as clearly on the video, where I’d been caught unprepared, as I did in this essay. But it was good enough. I may post it on YouTube soon, except that I got the date wrong on the narration, on all the takes.

For all I could tell, the people in the convenience store and driving along the road had no idea that an eclipse was occurring. The few people I talked to had no interest. Either they attended the little fundamentalist church beside whose sign I stood, or else they were totally absorbed in their own pleasures or problems or projects. In the old days, eclipses disturbed people. Today, they should be sources of wonder. But it appears that the geocentric theory has not been replaced by the heliocentric theory as much as by the egocentric theory.

My next stop on the evotour is Petrified Forest. I’ll let you know about it.

Note: Someone posted a comment on a previous entry, but when I click on it, my computer goes into an unresponsive mode. I have not read the comment but I suspect that someone has inserted a virus. Beware! Update: The problem was apparently a computer glitch caused by Google. The comment was not a virus.
Posted by Honest Ab at 9:55 PM