I just got back from my visit to Big Bend National Park, which is out in the Chihuahuan desert, which has a lot of creosote bushes, and blooming desert willows (not really willows) in the washes. The Chisos Mountains arise from the desert and create their own little world, a little cooler and a little wetter. These mountains are isolated from others. The trees that live there are not only rare but are genetically isolated from all other populations. I hiked among the pinnacles of the Chisos Mountains and got to see some of these rare trees. 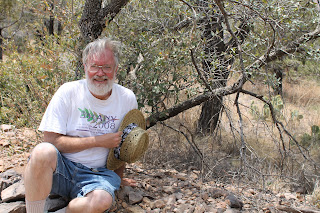 This photo is of me beside Quercus grisea, one of the species of oak that lives mostly in the southwestern desert mountains. Though globally rare, this tree is locally abundant. Usually the trees are small but, in moist canyons, they can grow quite large, as in this photo. 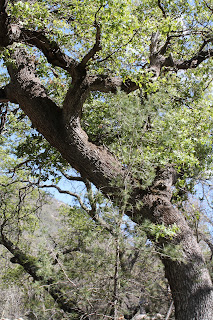 There is another oak species, the Graves oak (Q. gravesii), which is abundant in moist desert canyons. 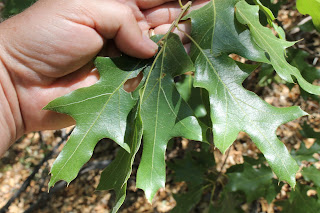 The Chisos oak, Q. graciliformis, is locally abundant in canyons at Big Bend but is found only in the Chisos Mountains and in one range of mountains just over the border in Mexico. 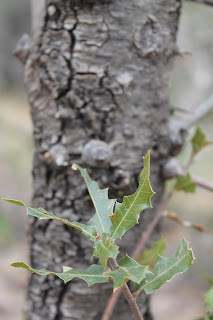 Many oak species, of which I saw at least five, grow in small isolated populations of desert mountains. Cornelius Herman Muller studied them starting in the 1930s, sorting out the taxonomy of these species. He studied their morphology, and was not very receptive to the molecular taxonomy that was becoming the standard research tool by the time he retired. When I met him at UC Santa Barbara in 1978, I did not know that I would one day be retracing some of his steps.

Near the base of the pinnacles, I encountered one very small patch of moist forest that contained bigtooth maple and hophornbeam trees, something breathtaking to encounter in the desert. Tiny isolated populations like these are what make Big Bend a UNESCO biodiversity site. 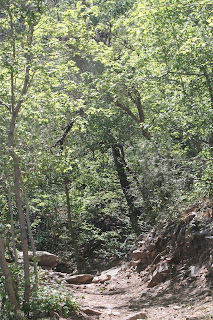 These rare and isolated trees are little pockets of evolution. They are in danger of extinction. They got there because, as climate changed after the last Ice Age, they retreated from a formerly widespread range. Some of them ended up north and east, where the climate was suitable for them. Others were stranded on desert mountains where only a few square meters can support them. Humans are causing global climate change that is accelerating this process of extinction. In the photo above, you can see that the gray oak trees behind me are largely dead from recent droughts. I saw many dead trees which had had large trunks. My purpose was to see these evolutionary oddities before both humans and nature drove them into extinction; I think I got there just in time. So if you want to see this lost world, better come soon!

I hiked and climbed to the top of Emory Peak, the highest mountain in the entire area. I estimate that my hike on Wednesday May 15 burned over 5000 calories.

I heard reports of other isolated tree species that I did not see. I was looking for the rare lateleaf oak (Q. tardifolia), and thought I had found one, but it was only a Q. rugosa transformed by my bias. I also found some limber pines, probably the southwestern form (Pinus reflexa). Some National Park Service biologists told me there were quaking aspens there also, and the park literature talks about douglasfirs. The soil is so loose and dry that I could not go off the trail looking for them. I tried once, only to fall and almost injure myself.

I got back in time to make final arrangements for the Evolution Road Trip, sponsored by Oklahomans for Excellence in Science Education. We have a good group of nine participants signed up. I will let you know what happens!