I think it was 1977. I remember watching President Jimmy Carter on television giving a speech about how America needed to conserve energy and develop energy-efficient technologies. The main reason, back then, was to lessen our dependence on middle east oil. The first oil embargo had just occurred the previous year. No one thought much back then about the problems associated with domestic production and export of American oil overseas, or global warming. This was still eleven years before James Hansen’s testimony to Al Gore’s committee in the Senate. Carter made a convincing case regarding a crucially important issue. True, back then there wasn’t much we could do—solar energy and generation of methane from cow manure were just in their infancy—and the message most of us took away from Carter’s speech was that we should put on sweaters at home in the winter (as Johnny Cash told us) and not put up Christmas lights.

Jimmy Carter was and is a nice guy, and understands the important issues. What he had trouble doing was stirring us up to take the initiative. One of the networks wanted to have a response right after his message. Today, news channels wish to have Republican extremists say how badly Barack Obama’s proposals will lead us down the path to communist dictatorship. But back in 1977, this network (I forget which) chose to have a mild and good-natured response to Jimmy Carter from cartoonist Pat Oliphant. Oliphant drew a cartoon during the speech and showed it on television right afterward. In the cartoon, Carter was dressed in a Civil War uniform, held up a sword, and said, “Charge, y’all.” The message was that Carter was right but had failed to inspire us to charge against the enemy, which was our waste of energy.

I fear that much of the scientific work on global warming has a similar effect. A recent issue of Science (August 2) had a whole section devoted to climate change. (You can search for issues and articles here.) As I looked through these articles, I got the feeling that they were saying the same things over and over that have been said for years. The article by Noah Diffenbaugh and Chris Field presented results of yet another computer simulation that said global warming is now occurring at the same magnitude that it has at any time during the last 65 million years, but a thousand times faster. This is causing distribution ranges of species to shift by up to a kilometer per year. Almost all land areas are already experiencing more extreme heat waves, droughts, and storms (more frequent and more intense). These are extremely important things. But I have heard them before and they were presented in cool scientific precision. The article by Craig Moritz and Rosa Agudo indicated that many species will become extinct from global climate change, unless they are generalists or unless they find refugia. Once again, a good article but nothing particularly new. The article by Tim Wheeler and Joachim von Braun indicated that climate change could disrupt food production in certain areas, particularly those areas that already have food production vulnerability, where even short-term disruptions could cause massive problems. They concluded that we need to invest in agricultural systems that are resilient to climate change. This sounds like Lester Brown in 1995 to me.

These were great articles, but somehow they seemed to me like the prolonged and painful contemplation of the obvious.

We say the same things over and over, with new data and models, and we say it in dispassionate terms, so that climate change deniers cannot call us alarmists. But consider these two things. First, the climate change deniers call us all alarmists no matter what. They consider Chris Field, not just Bill McKibben, to be an alarmist. Second, the conservative leaders of the House and Senate simply ignore everything we say. I mean this literally. Texas Representative Lamar Smith (guess which party) wants to change the peer review process, fearing that scientific research is straying too far from the conservative agenda. He called his proposal the “High Quality Research Act,” implying that the (to him) dismal quality of American research would be improved if we all did the kind of research that the Heartland Institute does. See Science, 3 May 2013, page 534. Furthermore, Lamar Smith believes that we have no need for Clean Air Act regulations. Democratic lawmakers got hold of a stack of scientific papers that demonstrated the need for such regulations in the interest of public health. Smith simply ignored them. This photo, provided by the Democratic staff of the House of Representatives, appeared in Science on 9 August 2013, page 604. Smith simply acted as if the papers were not there.

This is not the worst example. The North Carolina state senate voted that the rate of sea level change should be calculated in a linear, not curvilinear, fashion. That is, they were telling the ocean to not rise any faster in the future than it is now. They are delusional.

So what should we do? We could write more scientific articles. I am about to start work on one myself, about earlier budburst in deciduous trees associated with warmer temperatures. But we can write yet another pile of scientific articles, and conservative lawmakers will once again just pretend that they are not there, and then, like old King Canute, order the sea to not rise (as in this image from James Baldwin’s Fifty Famous Stories Retold). 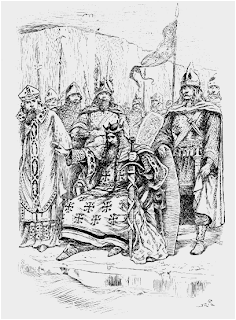 But scientists already know about global warming, and the opponents will just ignore our work. We already know enough to know what to do. I’m not sure if I’m ready to go out and get myself arrested during a protest like Bill McKibben or, for that matter, like James Hansen (see Science, 3 May 2013, page 540). But I am certainly going to do more than lecture my students about global warming. I have started requiring them to calculate their carbon footprints and compare them with people from other countries. When it gets personal, they might take notice.
Posted by Honest Ab at 10:07 AM