The Ecology of Disaster and Renewal

Nobody likes disaster. I strongly dislike even the smallest inconvenience. But they happen, and they have happened throughout the evolutionary history of life. And all organisms have inherited adaptations to cope with many of them, to a certain extent.

One such disaster (or, in ecological parlance, a disturbance) is fire. To all of us who watched Bambi, a forest fire is a disaster. But even in the Bambi movie, the dead forest had green grass growing after the fire. Disturbance is followed by renewal. This renewal occurs in stages (in ecological parlance, succession). There is no way to prevent all fires. Biomass burns. But most organisms have ways of dealing with fire—perhaps not as individuals, but at least as populations. Even alders, which grow out in the water, have to deal with it, because the flames can spread from the adjacent forest and burn their crowns.

A fire burned a large area of Cross Timbers forest near the Blue River in Johnson County, Oklahoma, in the summer of 2011. Despite its severe beauty, the fire was pretty grim for the plants and animals that experienced it. 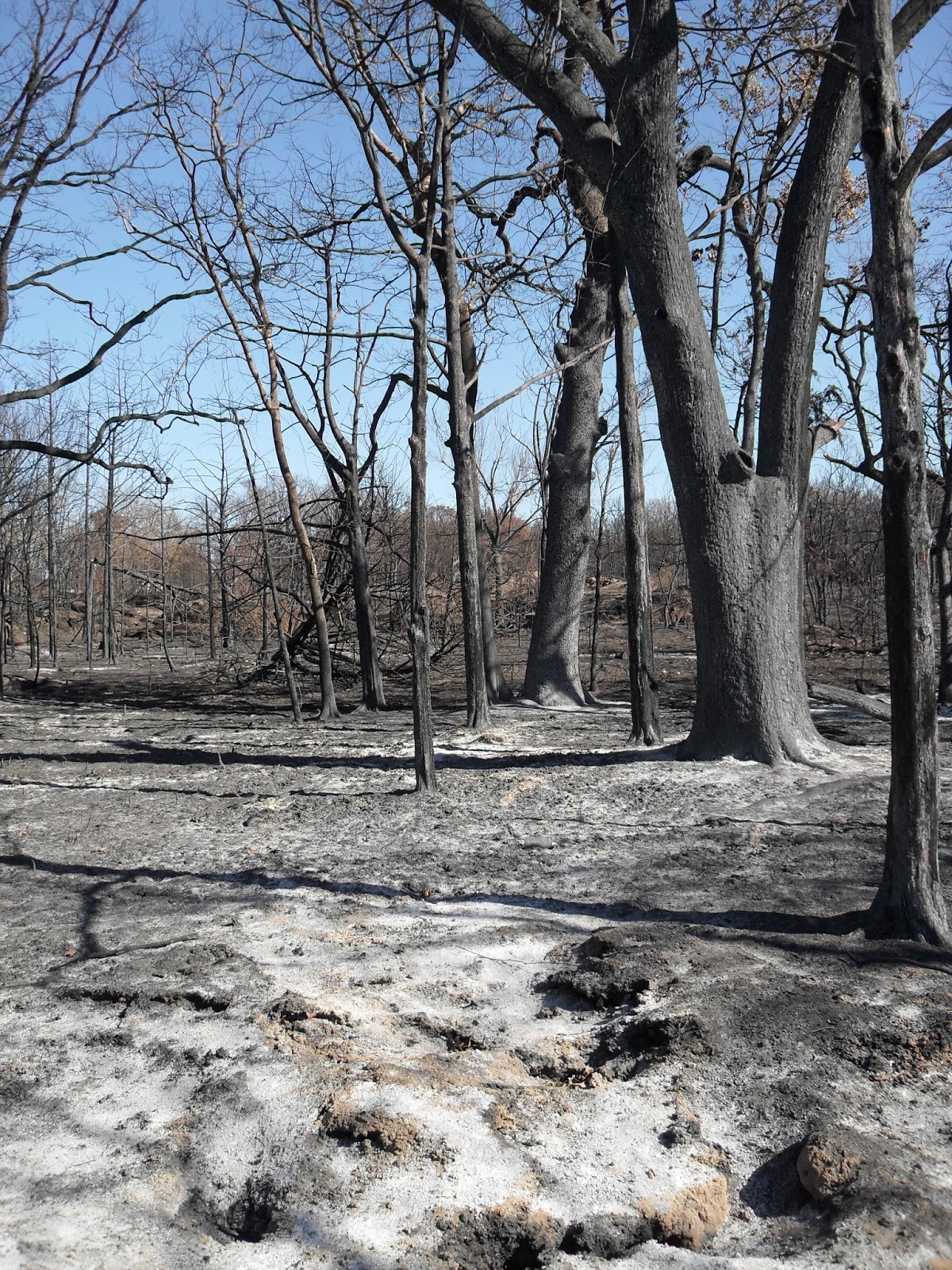 There were burned turtle skeletons everywhere. 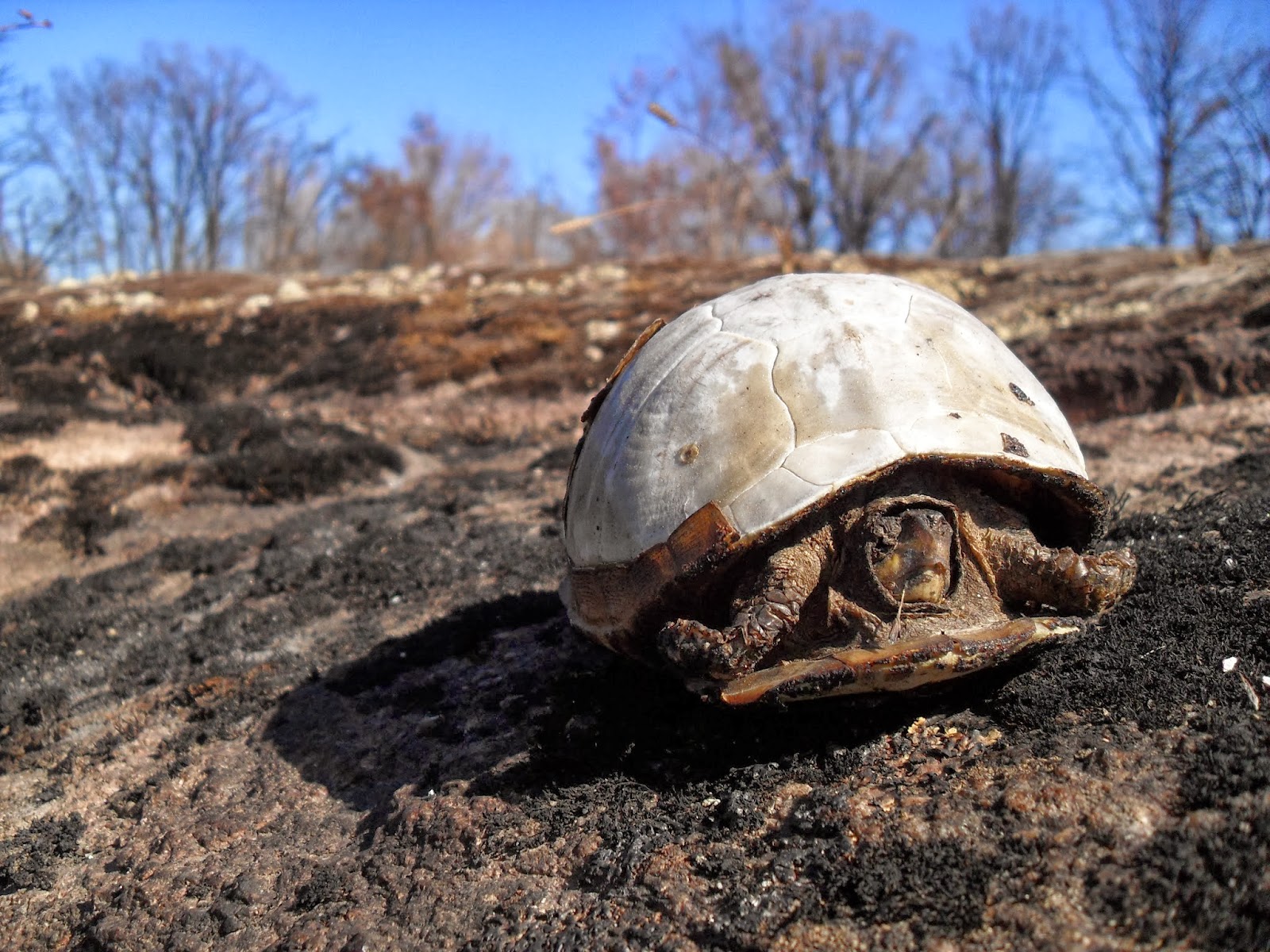 Yes, even the alders out in the middle of the river burned. But the next spring, in 2012, there was a luxurious growth of wildflowers and grasses, making use of the flush of nutrients released by the ashes of the fire. Many of the trees resprouted from the ground. By the summer of 2013, the growth was so exuberant that I could not even walk through it when doing field work with a visiting scholar from France.

But not all of the wildflowers, at least in 2012, were the same species that one normally finds in the spring. Two species in particular grew abundantly after the fire, but are rare the rest of the time. One is the mustard Selenia aurea. 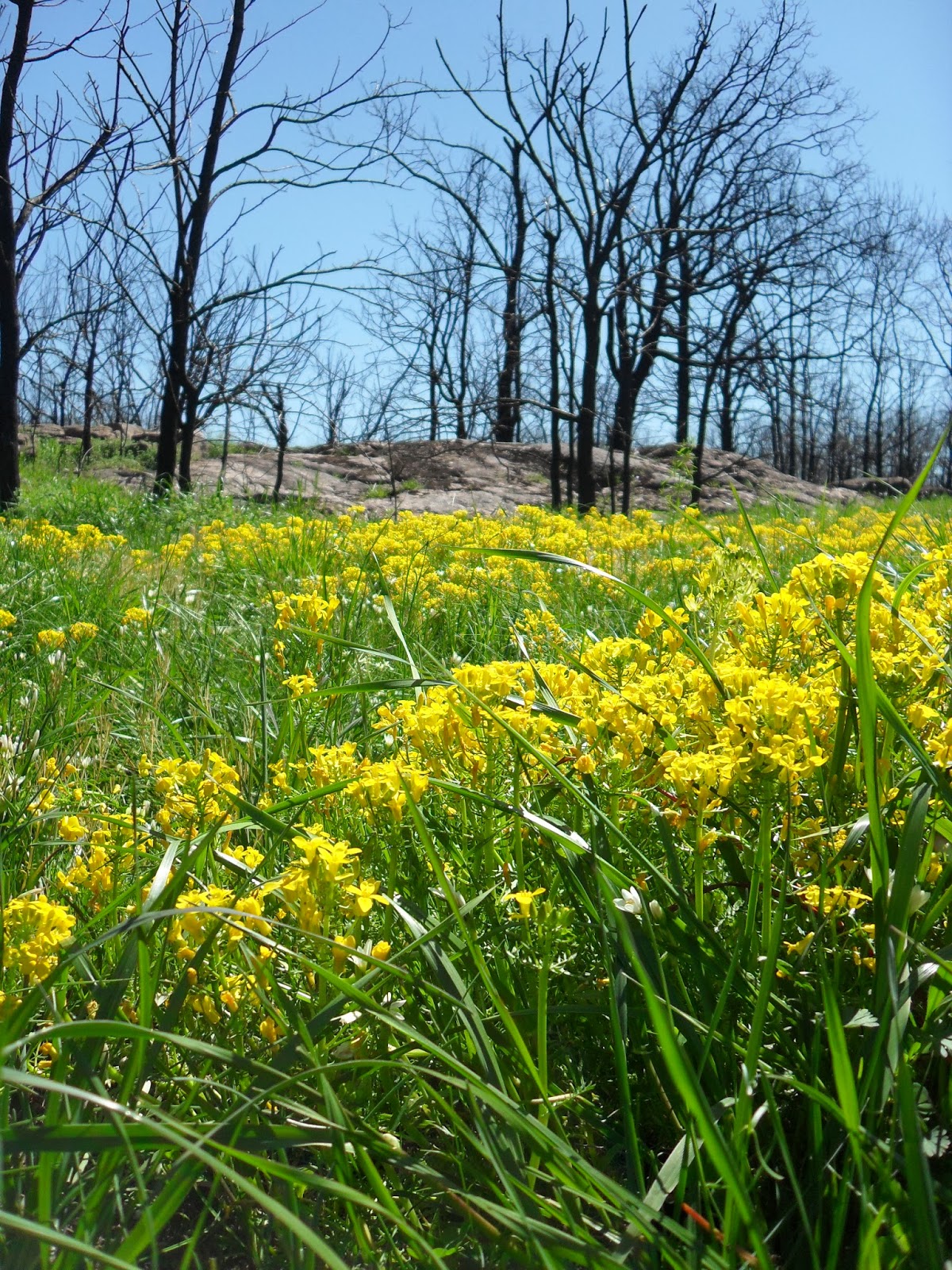 The other is a member of the Hydrophyllaceae family, Phacelia strictiflora. 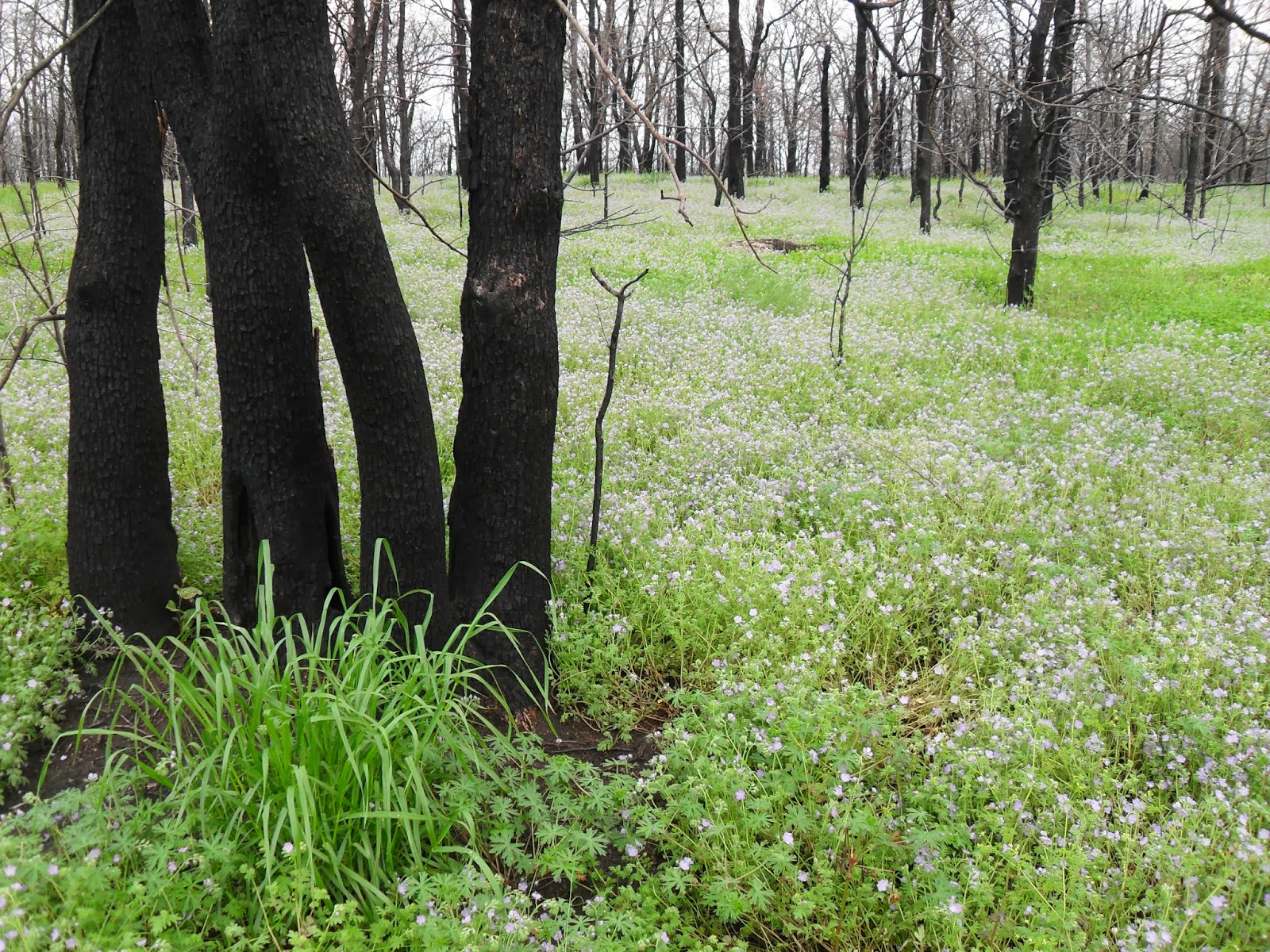 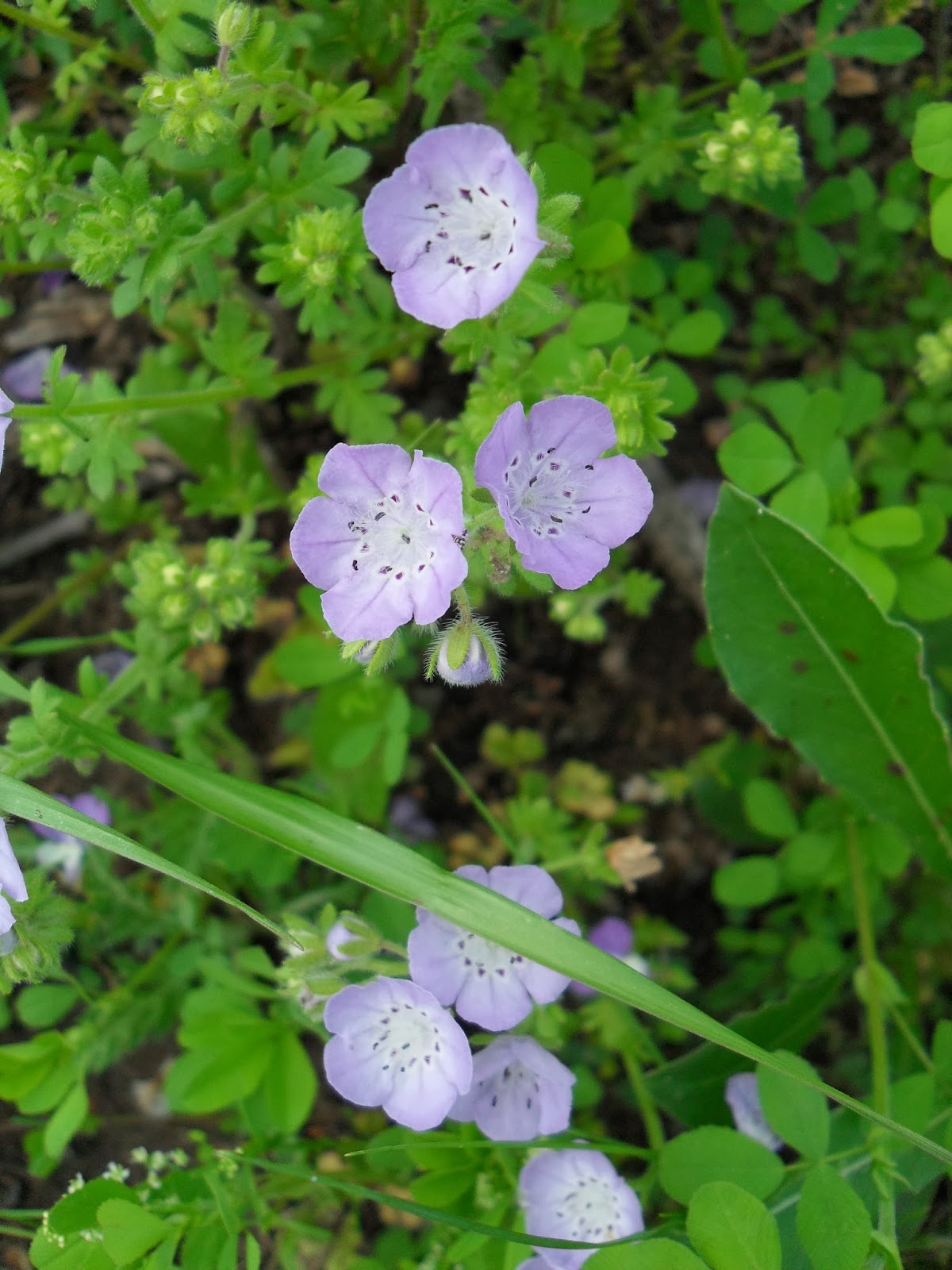 This wildflower is a relative of Phacelia grandiflora, which grows abundantly after chaparral fires in California. Now here is where it gets strange. It is no surprise that grasses and wildflowers grow abundantly after fires. What is strange is that a few species, such as Phacelia strictiflora, seldom grow except after large fires. That is, there is something about the fire that makes the seeds germinate. The flowers do not grow just because the ashes have released nutrients or because there is more sunlight as a result of the trees being burned. Many plant species that live in habitats with a fire cycle (such as the chaparral) require exposure to smoke chemicals in order to germinate. Phacelia grandiflora is one of them.

Oklahoma does not have any habitats with fire cycles. It therefore came as a surprise to us that the germination of the Oklahoma wildflower Phacelia strictiflora is greatly enhanced by exposure to smoke chemicals. The results of our research have just been published in the 2013 volume of the Oklahoma Native Plant Record. We demonstrated that very few Phacelia strictiflora seeds germinated—whether scarified or not; whether in light or in dark—unless exposed to a water suspension of smoke chemicals.

It was a fun experiment to do. How does one produce a smoke suspension, without having access to a budget for scientific equipment? You have probably already guessed the answer. Remember, this is Oklahoma. My student, Sonya Ross, who conducted the experiments, had access to a hookah pipe. We burned oak wood in the bowl and drew the smoke through the water. Usually hookah aficionados want the smoke, but we wanted the water, which after a few hours had turned amber and had a smoke scent. 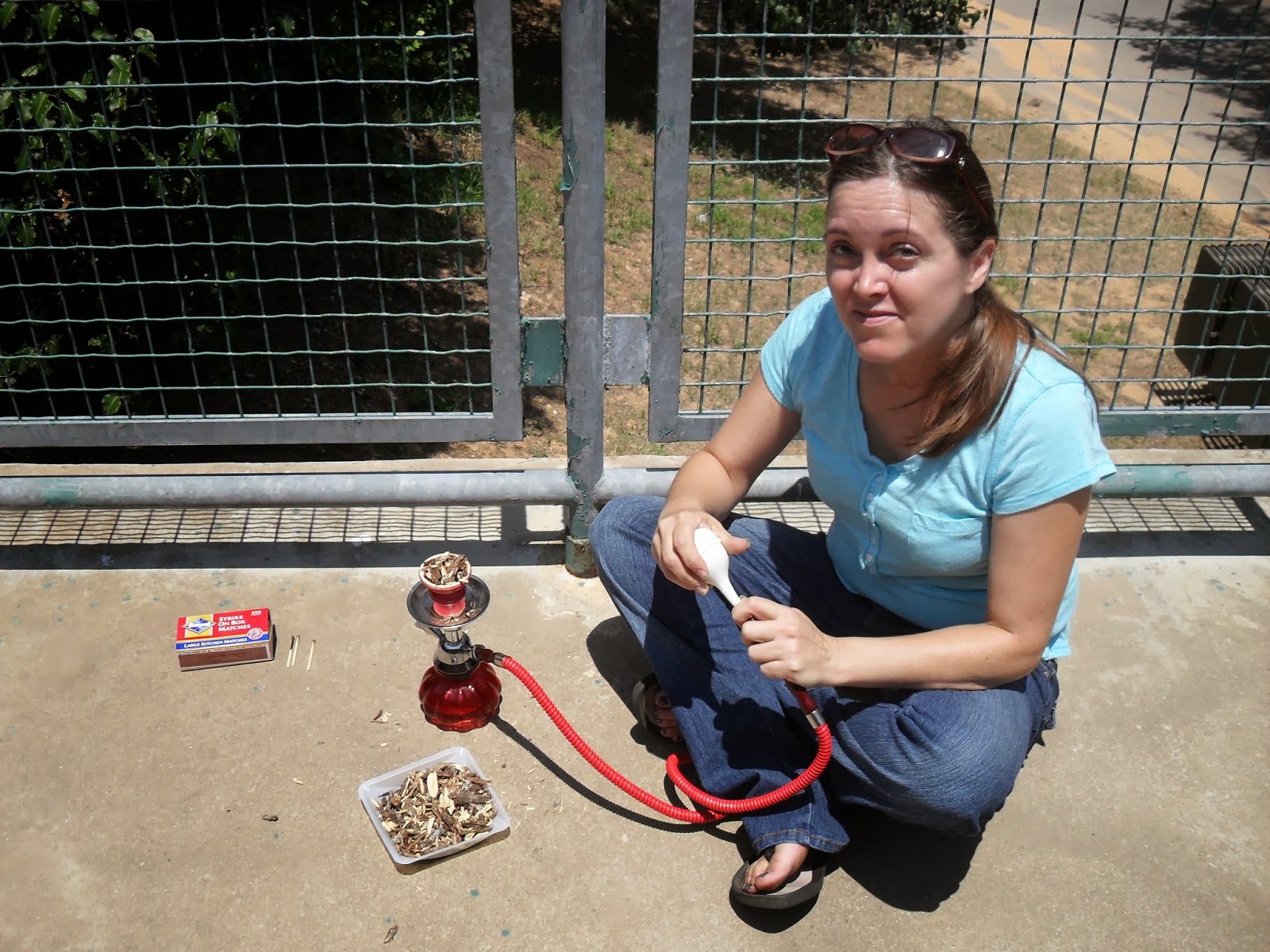 This allowed me to produce a particularly interesting Darwin video. This was a low-budget experiment, but it yielded important results. This may be the first report of a plant species from a habitat that does not have a fire cycle but whose germination is so strongly enhanced by smoke. Many seeds germinate more upon exposure to smoke, but not this much.

There are a lot of interesting experiments just waiting to be done and which do not require a lot of equipment or a budget. Please check out the article. And I have to say, good work, Sonya.

Oh, and by the way, oak smoke is not very enjoyable, even after it has been through a hookah pipe.
Posted by Honest Ab at 1:50 PM