A Brain Takes a Nature Walk

I am currently reading Incognito: The Secret Lives of the Brain by David Eagleman. It is one of several books based on modern psychology that give us new insights into what our brains are like—insights that are both disturbing and liberating.

I already knew that the brain does not present us with an objective picture of reality. I thought that it processes sensory information into a model of reality, one in which the information from the environment is presented to us in a useful fashion. For example, I knew about sensory fatigue, in which an unchanging sensory input is soon ignored by the brain. This keeps the conscious brain from being overwhelmed by information. I also knew that color is an illusion. The brain uses inputs from three kinds of retinal cones to create a false-color picture of the environment, one in which ripe fruits are red so that they can be easily spotted by hungry animals without having to think about the complex mixture of wavelengths reflected from the environment.

And this is what I have been teaching my classes for almost three decades. But it turns out I might be wrong about this. The brain does not, apparently, process sensory information into a model of reality. Instead, our brains (according to Eagleman) internally generate a picture of reality. That is, what we see, hear, and feel is a model that the brain generates from its own memories and expectations. The brain uses sensory input only to modify and adjust this model as needed.

I took a walk in the woods this morning. It was the perfect time for a walk on Turkey Mountain, just outside of Tulsa. A Tuesday morning is almost the only time the parking lot is not full. The temperature was perfect, the sunlight was clear, and the leaves were light green, soft, and profuse (they will later be dark green, hard, and scraggly). It was also the last time for a while: the abundant rains that have suddenly filled our low reservoirs will return tomorrow. I walked on trails I have explored dozens of times. My mind pretty much knew where to make my body go. My mind utilized sensory input only to modulate where my feet moved so as to position themselves correctly on the rocks that my subconscious mind probably already knew were there. I could not have walked blindfolded, but just a few visual data are all that were necessary to allow me to walk—a few more than usual, since I had to avoid mud holes that others before me had not, and fallen branches and trunks.

Every person who was on the trail had a different mental image of it. Some joggers noticed only where the rocks and mud were, as they ran along listening to headphones. Some hikers saw little more than this, perhaps being aware of the vaulted canopy of branches overhead, as they concentrated mainly on their own animated conversations. The brains of dirt bikers had to do quick calculations of velocity and momentum, not having time to notice anything else.

And then there was me, the botanist. I noticed all the different kinds of trees: no matter how many times I see them, I feel like they are old friends. I wonder how many other hikers realize just how many kinds of trees there are. I also noticed the spatial patterns of the trees: the post oaks in higher and drier spots, the red oaks in the lower and wetter spots. I also noticed that poison ivy and aromatic sumac (with which it can be easily confused) never grow in exactly the same place, the former preferring shadier and wetter microclimates. Moreover, pollinating insects do not get poison ivy and smooth sumac (whose flowers look almost alike) mixed up since poison ivy is blooming right now and the smooth sumac flowers won’t open until at least next week; and they cannot confuse either of these with aromatic sumac, whose flowers open before any of the leaves have come out.

Here are photos of poison ivy flowers, and the gigantic leaves! 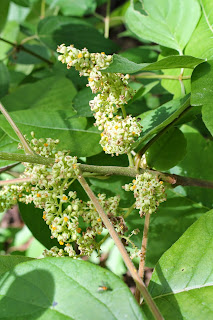 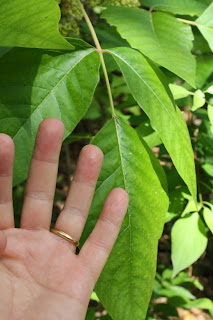 I also notice the bark of each tree. My daughter thinks I have a picture of every tree trunk in Oklahoma, but I know I’ve missed more than half of them. Bark is beautiful, each species having its own kind, each life stage having its own kind, and each tree having bark that reflects its own personal story of experience, growth, and recovery, as in this post oak that has had to start its life over again at least twice: 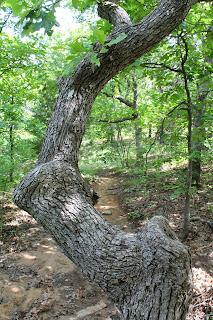 I see the forest as a functioning system in space and time, rather than as a backdrop for my own human activities. My brain noticed all these things because I consciously decided to look for them.

But my brain ignored a lot of things that other scientists could have pointed out to me. I am sure there were lots of insects, and insect galls, that I did not even see. To me, an insect-damaged leaf was one to ignore when taking photos, instead of a vital piece of information to understand the food chain of the forest. It was only by chance that I noticed a wild bee pollinating a Phacelia flower. 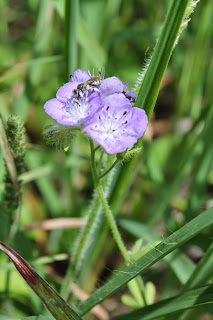 As for birds, you have to look closely to see the indigo buntings, whose blue backs appear black at first glance. A geologist would be able to explain how processes millions of years ago produced sandstone in some places, and shale in others, on what is now Turkey Mountain, and until recently I walked right past fossilized impressions and even petrified wood of prehistoric lepidodendrid trees without even seeing them. My brain was in plant mode just as the joggers’ brains were in don’t-slip-in-the-mud mode. I, too, entered the forest with an internally-generated model of what it was supposed to be like.

I would like to leave you with this thought. You can always enjoy a place more if you look closely and start noticing things. If you keep your brain in energy-savings mode, so that it responds only to threats and inconveniences, you are  missing the joy of being alive. Of course, I do not need to say this to anyone who is reading this essay right now! And the people who come to the forest only to jog might, in fact, find themselves surprised and pleased at discovering something about the forest through which they had merely intended to run.
Posted by Honest Ab at 1:23 PM