The Discipline of Inspiration

I certainly did not feel like taking a hike this morning. But yesterday I decided I would hike at dawn today. My body woke up before 6:00 and said, Get up, ya lazy ass, ya said ya wanted to go on a hike. So I got up, and for the next 511 calories I hiked, stumbling at first, and at last. But I decided I was going to experience the beauty of the world. And I did. Inspiration isn’t something that you wait around for. It is a discipline.

The fact that the words and music of “Sunday morning coming down,” popularized by Johnny Cash, were going through my mind did not help to inspire me, written as they were about a lonely man with a hangover. Even when alone I am not lonely, and I certainly have not experienced “And there’s nothing short of dying that’s half as lonesome as the sound…of Sunday morning coming down,” but part of my discipline was to focus the rest of my mind, the part not parasitized by that tune, on the beauty around me.

And during an Oklahoma heat wave, when it is almost 80 degrees F at sunrise, it is more of a discipline than in many other places. All I did was crouch to take a photo of a turtle, who was as zonked as I was, and I found myself panting. 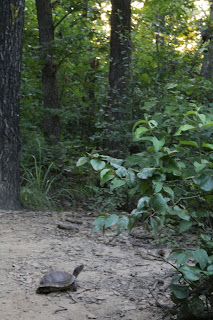 It was also a discipline because the forest in which I was immersed was surrounded by frantic economic activity; just a half mile away, there was an endless grind of trucks. I had to force myself to pay attention to my surroundings. I was ready to take notes, not trusting my groggy memory. I used to take notes on paper, but I now use an iPhone, because sweat effaces both pen and pencil, and returns paper to its pulpy natal state.

We divide the year into seasons, and the seasons into periods (such as early summer, our current period). But actually the natural world goes through its seasonal cycles, and each week or two is noticeably different. It seems like just yesterday when the persimmon fruit was just a flower.This week, the Sabatia, Monarda, and Ruellia flowers were out. Two weeks hence and you won’t see very many of them. And there is no season in which the trees can sit back and just do their work. They are constantly monitoring their environments for opportunities. In most years, they simply let the leaves they grew in the springtime do their photosynthetic work for them; but this is such a wet year that many of the trees, from blackjack oaks to winged elms, have seized the opportunity to invest in the wealth and produce a new flush of leaves.

You have to decide to look and notice things. Any other time and I might have walked right past the new, unopened florets of Chasmanthium “fish-on-a-pole” grass. 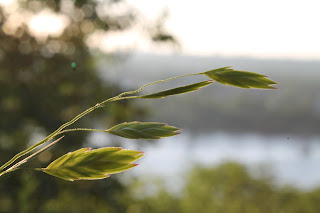 Had I not glanced up, I would not have noticed the struggle for existence going on right over my head, as a spider sucked the life out of an insect. I always teach my students that Virginia creeper vines have leaves with five leaflets. But today I was deliberately alert for surprising variation. And I noticed what I had perhaps often seen but not thought about: a Virginia creeper whose leaves had three leaflets, sometimes four. 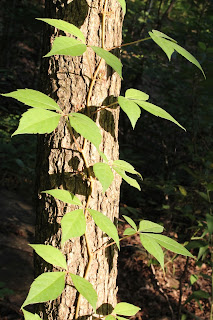 You have to look closely and think about things. Yes, I am that guy ahead on the trail who is crouching down to look at horse droppings. It has been so warm and humid that, within a day or two, a sheen of fungus has started growing over them.

I was not the only person on the trail. A bunch of young men came running along the trail, their coach at the end of the line. They could not have noticed the quiet details that I saw, but they certainly noticed more than they would have if they had stayed at home.

There is a story I have heard about St. Francis of Assisi, who loved all the animals (and plants and Brother Sun and Sister Moon). When he encountered dying earthworms on the trail, he would pick them up and throw them back into moist soil. I wonder if, today, they would call him St. Francis the Sissy. But, as I mindfully walked on the trail this morning, I could appreciate his reverence for life. Unlike Francis, I left the worms where they were—there are so many of them, I cannot possibly save enough worm-lives to matter, and they were already wriggling in the last throes of death anyway. And worm death is part of the ecosystem I so admire. But maybe, if he had seen me stop and look, St. Francis would have smiled and reflected, At least I made him think for a moment.

Inspiration also followed discipline in my life yesterday. I am working on what might be the most significant novel that I will ever write, a rewrite of a rewrite of a 1991 rewrite of a 1990 manuscript. I had the ending pretty much tied up in the original version, or so I thought, but I realized yesterday there were too many loose ends, characters and continents left dangling. I had to write a new ending to the novel. I really did not feel like it, nor did I have a clue how I was going to do this. But I just decided to start. The wellsprings of creativity soon carried me away and I wrote 7400 words of an ending I could not have guessed even earlier the same day. This creative work took a lot out of me. I don’t think I could do it today, but there is no day on which I can write anything unless I undertake the discipline of inviting my mind to unleash its creativity.

So perhaps the best time for a nature walk is when you are disinclined to it. The great composer Antonín Dvořák routinely took a sunrise nature walk. Today is one of the few days that I have done so, but I tasted a little bit of the inspiration he felt. But even for a genius like Dvořák, inspiration only came in after discipline had opened the door.
Posted by Honest Ab at 8:49 AM