The Evolution of Language...and Manipulation

What are the evolutionary purposes of language? Most people would, without further thought, assume that the principal purpose of language is communication of information. That is, indeed, one of its purposes; but, I believe, it is a secondary purpose. The primary purpose of language is social interaction: to influence others to do what you want them to do, to create a good (or bad) impression of yourself in the minds of others, to identify yourself as a member of their particular group.

This is the principal reason that there are languages, plural. Each “tribe” even today has its own language. These languages are much more complex than they have to be, and the main reason is that if you cannot master the complexities of the language and its pronunciation, you are probably an outsider.

But even within a society, language is primarily a tool of social interaction, and often of manipulation. We can see this in the current eruption of white supremacist and neo-Nazi sentiments in the United States. The use of these terms would prejudice a reader against them, and I would avoid them, except that the right-wing extremists are proud of them. Some of them carry Nazi flags, and the others allow them to.

1.      When a white supremacist rammed his car into a crowd of anti-Nazi protesters in Charlottesville on August 12, 2017, President Trump vacillated between condemning neo-Nazi activities and considering them to be merely part of the spectrum of political opinion. At no point did he or any other member of his administration call this an act of terrorism. But it fits all definitions of terrorism. The terrorist was not targeting a particular individual with his car; he was attempting to create terror among the people who were protesting against the white supremacists. And he used deadly force. If he had been Muslim, he would have been instantly branded as a terrorist. The selective use of the word “terrorist” against Muslims but never using against white Christian extremists is a clear use of manipulative language.
2.      The white supremacists call their cause and their rallies “free speech rallies” rather than neo-Nazi or white supremacist rallies. By getting millions of people to use this term for their activities, they project the message that, “You can’t possibly be against free speech! So you have to allow us to shout out our hatred against our fellow citizens.”

Technically, they have the legal right to say whatever they want to, so long as they do not incite people to violent action. But they are evil. We cannot allow them to depict their actions as mere defenses of free speech. All of us who are not aspiring Nazis must keep calling these people, and all who sympathize with them or speak out in their defense, what they are: the modern defenders of Adolf Hitler.

Some conservatives have tried to excuse the terrorist by saying that he had suffered abuse as a child. I have no opinion about this. But a black man could not have used this excuse.

Hitler himself was a master of language manipulation. (He wasn’t a master of much else. His leadership was disastrously delusional and destructive for his own German people, for example.) Most of us think of the phrase “Deutschland über alles” (Germany over all) as being Hitler’s phrase for world domination. But it was originally used to unite the German kingdoms (such as Saxony and Bavaria) into a single country: Germany was more important than its constituent kingdoms. Hitler stole the phrase and all the sympathy that went with it. Also, if Hitler had publicly proclaimed that he planned to slaughter millions of Jews, if he had called it an attempt at extermination, he would have had much less support from the German people. But he called it a “solution,” and who wouldn’t be in favor of this? A person is as likely to support a “solution” as “free speech.”

Political conservatives hate, viscerally hate, our modern language practices in which we attempt to counteract the racism of the past. They call it “political correctness,” which implies that anyone who does not use racist terms is doing so only for political influence. Our use of “black” instead of “nigger” can only mean, to conservatives, that we want political power; they think it cannot possibly be because we want to show respect and love to people who people who have been oppressed and slaughtered in the recent past. Conservatives want to refer to what happened in Tulsa in 1921 as a race riot, implying that black people were doing the killing and burning. In reality, it was a white mob hunting down and shooting blacks. Prominent Tulsan and KKK member W. Tate Brady was pleased to see a black man being dragged behind a car with a noose around his neck. It is not “political correctness” that makes us refer to the 1921 incident as a massacre or as an act of terrorism rather than a riot. It is a desire for truth, and to try to make up for the white massacre of blacks in the recent past. 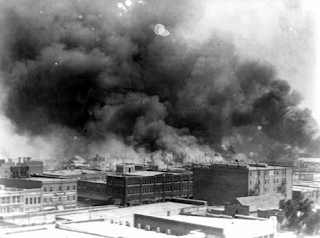 To test the hypothesis of “language exists largely for manipulation,” all we need to do is see the spectacular failure of invented languages. Esperanto was invented to create world peace under the misguided notion that a common language will prevent miscommunication. But liars can lie in Esperanto. Charles Bliss created a system of symbolic communication that, he believed, would prevent language from being manipulated. He printed up six thousand copies of his book and sent them to government and other leaders all over the world, and got no response whatever, until some nurses noticed that this system might help children with cerebral palsy, who cannot communicate what they are thinking, to connect with the world. Bliss’s system thereby escaped extinction. But soon it was being used, not in place of other languages, but as a way of learning them, leading right back to the manipulation that Bliss, an escapee from World War Two, hated so much.

And there is nothing we can do about it, other than to keep using language in such a way as to try to counteract evil people from using their words to oppress others in their attempt to revive Nazi sentiments and make them palatable.
Posted by Honest Ab at 10:41 AM