A Genetic Record of Conquest and Dominion: A Cherokee Story

Here are further thoughts that came to me as I read David Reich’s Who We Are and How We Got Here: Ancient DNA and the New Science of the Human Past (Pantheon, 2018). See my previous essay for more about this book.

All of human history has consisted of conquest and dominion. One human group, whether tribe or nation, has conquered one or more others for as long as there have been humans. And in the course of these conquests, the conquering men have had children by the conquered women.

That is certainly what happened in America. Europeans came to America and started conquering Native Americans. Except when they intermarried with them. When they did so, it was usually a white man with a Native woman. This happened over and over again in my family. My sixth great grandmother, Nancy Ward, was a full-blood Cherokee who married a white trader, Bryan (Bryant) Ward. Their half-Cherokee daughter, Betsy Ward, married the white general Joseph Martin. Their quarter-Cherokee daughter Nancy Martin married a rich white (German) ferryboat owner named Hildebrand. Their one-eighth Cherokee daughter Elizabeth Hilderbrand (somewhere along the line the r was added to the name) married a white man, James Pettit. Then things reversed temporarily when their one-sixteenth Cherokee daughter Minerva Pettit married Usquuh-ne, a.k.a. Lewis Hicks, who may have been full-blood Cherokee. But at least on the maternal Cherokee side of my family, it has mostly been white men and Native women. The picture is of Elizabeth's grave in Ft. Gibson, Oklahoma (1801-1887). 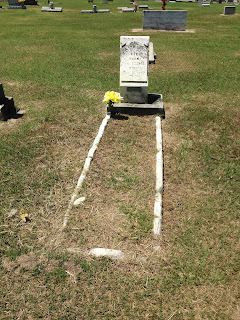 This is also what happened to black people. Most American blacks (except the Gullah speakers from the islands off the coast of South Carolina) have partial European ancestry, mostly from white men, many of them slave owners.

The historical evidence for this is reflected in the genetic evidence. In your cells, the Y chromosome (if you have one) came only from your father, and your mitochondrial DNA (abbreviated mtDNA) came only from your mother. In a perfectly fair admixture (in which, for example, white-mother-Native-father pairings were as common as white-father-Native-mother pairings), the Y:mt ratio would be 1:1. But among American blacks, the ratio is 4:1 white to black. In some populations in Central America, as in Colombia, the ratio is as high as 20:1.

To put it in personal terms for me: Up to my great grandfather Andrew Hicks, all of the mtDNA was native. At that point, beginning with my white great grandmother Mary Franklin Hicks, all of the mtDNA was white. My grandfather married a white woman too. I got all my mtDNA from my mom, but it was probably all white. Therefore, perhaps all of my Y chromosomes, and all of my mtDNA, are white. My native genes are mixed into the other chromosomes somewhere.

Back to the white Y chromosomes. Did the white Y chromosomes in my family, and maybe yours as well, come from white men raping dark women, or from dark women choosing white males in order to get some of their wealth and status? Undoubtedly some of both. Both of these Y sources constitute oppression of women: rape is absolutely direct oppression, while the appeal of white wealth and status is an indirect, and possibly subconscious, oppression. In the case of white male owners and black female slaves, it is difficult to see it as anything except rape, since the woman had literally no choice in the matter.

But in my family, things were a little more complicated. As musician Becky Hobbs wrote in her musical Nanyehi, which was about our shared ancestress Nancy Ward, “Cherokee women have always done and will always do whatever they want.” Bryan Ward did not rape Nancy. But the white connection gave Nancy Ward status and respect in the eyes of the white conquerors, and she used this status to her advantage. (She already had status in the eyes of Cherokees.) One of the things she did was, I believe, to arrange to have her half-white daughter Betsy married to Joseph Martin, later a general. This gave Betsy influence in the white world far beyond what a full-blood Cherokee was likely to have. General Martin did not rape Betsy. The trader Bryan Ward and the general Joseph Martin got advantages among the Cherokees because they had Cherokee wives, and Nancy and Betsy got advantages from Betsy marrying the general who was in charge of Cherokee-white relations. All of this status and advantage came to a screeching halt when Elizabeth Hilderbrand Pettit, one-eighth Cherokee and Nancy’s great-granddaughter, had to go on the Trail of Tears to Indian Territory along with all the full-bloods, and take little Minerva with her.

But here is the most complicating factor. In three of the Cherokee-white marriages in my family history, the Cherokee woman was the squaw wife of a man who already had a white family. Bryan Ward had a white family down in Georgia, outside of Cherokee territory, and he eventually returned home to his white wife. General Martin had a white wife and family back in Virginia. Apparently, in both cases, the Cherokee women knew that they were second wives. Nancy’s great granddaughter Elizabeth Hilderbrand, however, did not. By Cherokee law, after about 1829, polygamy was illegal in the Cherokee Nation. When Elizabeth found out her white husband James Pettit had a white family in Missouri, she sued the crap out of him in the Cherokee Supreme Court and won. She was the only woman to do this in the history of the short-lived Cherokee Supreme Court. I’m proud of her. You can read about this in Theda Perdue’s Cherokee Women (University of Nebraska Press, 1998, page 151).

The biggest example of male warrior conquerors inseminating female victims was the empire of Genghis Khan. In some areas of western Asia that were once part of his empire, up to eight percent of males carry what was likely to be Genghis Khan’s Y chromosome, many centuries later. But this was not all rape. Genghis and Kublai Khan established empires that produced a lot of public works and other benefits for the conquered people. The men who ruled the empire must have been much in demand by the native women.

In all these cases, it was conquest and dominion, even if the dominion was one that the conquered women thought that they consciously chose. We just need to admit this fact about ourselves, our human species.