The Scientific Method and Reincarnation: The Bridey Murphy Story

I ran across a book that my late mother-in-law had: The Search for Bridey Murphy, by Morey Bernstein, published in 1956.

Bernstein was a businessman who became interested in hypnosis and all of the many medical benefits it could potentially confer. But his interests went beyond this. He was interested in age regression, in which the person who is hypnotized not only remembers early childhood, but relives it. The memories of early childhood, even infancy, are stored away in the brain, some hypnotists claim, and can be unleashed.

If a subject is hypnotically regressed to infancy, he or she may be able to describe sensations and memories from infancy, in words, even though they could not talk during infancy. This brings up an interesting question. How could one determine whether the subject is actually re-living infancy? Bernstein said that, when a subject is regressed back into infancy, their reflexes actually change. Infants and young children have the Babinski reflex, but older children and adults do not.  During age regression, the hypnotist can get the subject to actually change from the adult reflex to the infant reflex. This would be strong evidence of the effectiveness of age regression. I do not know how good the evidence is, having read about it only in this book.

But Bernstein wanted to take age regression back further—not just back to infancy, but back before birth. Just keep going...back into a previous lifetime. If hypnotized subjects had true memories of past lifetimes, this would prove reincarnation. But how can the hypnotist know whether the memories are true, and are of past lifetimes? This brings us to some interesting points about the scientific method.

It is not enough just to dismiss spiritualist assertions on the grounds of inherent absurdity. The most famous agnostic, the inventor of the word agnostic, Thomas Henry Huxley, made this point. What Huxley did was to give spiritualism a chance, after which he (along with E. Ray Lankester) showed that at least the spiritualist seances that he attended were, in fact, hoaxes. He concluded this, rather than assuming it. And he knew this did not prove all spiritualist experiences were hoaxes.

First, consider bias. Bernstein tried very hard to prove that he was not biased. He openly admits that he started off completely agnostic about religious concepts. That is, he claims that his discoveries convinced him despite, not because of, his initial bias. Further, he was rich enough from his business, he did not need to pull a hoax to get rich. These two preconditions are helpful, but do not eliminate the possibility of bias. Some evangelical Christian apologists (most famously Josh McDowell, author of Evidence that Demands a Verdict in which he claims to prove Christian doctrine) say that they started off as atheists and were converted by the evidence that they found. However, despite his lack of initial bias, McDowell definitely developed a bias later. And even though Bernstein was rich enough to not need a hoax, there are plenty of rich people who cannot keep themselves from trying to get richer by unethical means. But at least Bernstein made an effort to begin in an unbiased fashion.

One thing that greatly reduced the chance of bias is that there were independent fact-checkers. This did not completely eliminate the chance of error, however; journalists are looking for an exciting story (even back then, if it bleeds, it leads) and would prefer the reincarnation conclusion over fraud or delusion.

Second, consider how one can evaluate the quality of the evidence of a past life obtained from a hypnotized person. Perhaps the strongest evidence would be if the person provided details that the person could not possibly know. (This is a condition that is nearly impossible to satisfy today. Everyone has a world of information at their fingertips. Give me a little time, and access to the internet, and I could make up a convincing fake story that I am a reincarnated Viking. But in the pre-internet days, this evidence was much harder to get and thus more meaningful.)

Bernstein hypnotized a woman he called Ruth Simmons (she was actually Virginia Tighe), who was born in Iowa in the twentieth century. When he regressed her back before her birth, she revealed that she had been an Irish woman Bridey (Bridget) Murphy who was born in 1798 and died in 1864. She did, indeed, reveal a lot of details that seemed convincing. She even started talking with an Irish brogue during the hypnotic sessions, something she could not do normally. Are you convinced yet? She said that she could dance the “Morning Jig” when she was alive in Ireland. Bernstein gave her a post-hypnotic suggestion: that, upon awakening, she should dance the jig for the observers. And she did. Are you convinced yet? The woman also gave geographical details that a twentieth-century American would almost certainly not know about Ireland (actually, Northern Ireland), including the conflicts between Protestants and Catholics in the nineteenth century. Are you convinced yet?

The Bridey Murphy story became a sensation after it was published in a newspaper in 1954 and as a book in 1956. It seemed like everyone was talking about it. People with a spiritual (but not fundamentalist Christian) inclination were swept up into believing it. Materialistic people subjected it to ridicule. Even Donald Duck’s uncle McScrooge made fun of it. In her copy, my mother-in-law wrote down the address of the Bridey Murphy Discussion Group of Peoria, which met in Marquette Heights in nearby Pekin, Illinois. 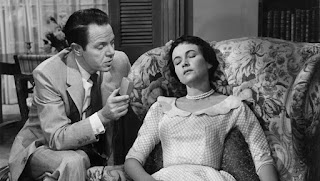 [This is a photo from a movie adaptation.]

The book was rushed into print with too little fact-checking to even satisfy the author. But there was plenty of fact-checking afterward. And here is where the scientific method gets interesting. During the intense discussion, there were two competing hypotheses: that Ruth Simmons was making it all up, either as fraud or delusion, vs. Ruth Simmons really was remembering her past life as Bridey Murphy. (And she even had a vague memory, it seems, of dying as a baby in New Amsterdam, which is today New York, over a century earlier than Bridey Murphy.)

The people who wanted to prove Simmons was making it all up pointed to supposed errors in the facts she recited. But her defenders showed, in every case it seems, that the story was credible. The places she mentioned, and the terms she used, the customs to which she referred, were not inaccurate for the time and place, even when they could not be verified. In a few instances, Bridey seemed to be exaggerating in order to make her husband seem more prominent than he was. She claimed he was a barrister (the highest grade of lawyer), but that he managed accounts for stores, something that only the lowest grade of accountants did. But this may have enhanced the credibility of her account: she was telling—and exaggerating—her life experience, not a mere story.

Besides, someone pointed out, the Bridey Murphy story is, by itself, too boring to be a fabrication. After all, everyone wants to be a reincarnated king, not a serf or something. But Bridey was just a woman who got married, never had kids, and died at age 66 after falling down the stairs. The only interesting thing in her story was that she was in a mixed marriage (she was Protestant, her husband Catholic).

Bernstein provided long transcripts of the tape-recorded hypnosis sessions in the book. In session after session, he asked the same questions, such as what her husband’s name was. One’s eyes start to glaze over. But this repetition was actually quite valuable. They proved that the woman was not just making it up as she went along. The information was deep inside her brain, and came out the same way every time. Even a good liar would have a hard time keeping a consistent story for six sessions of hypnotism. Also, for this reason, it was clearly not a delusion.

In the competition between the fraud/delusion hypothesis and the reincarnation hypothesis, the latter easily won.

This is where it really gets interesting. New evidence emerged. (Don’t you just hate it when that happens? New facts can destroy a nice story.) When Ruth Simmons was growing up in Chicago, an old Irish woman lived across the street. Her name was Bridey Murphy Corkell. The hypothesis that turned out to be true was a third hypothesis not previously considered: that Ruth had learned the story very well from this woman, even learned her accent, and even learned the jig, and then forgot where or even that she had heard it. This is a now-well-established phenomenon known as cryptomnesia, or hidden memory.

There have been other famous cases of possible cryptomnesia from the world of creative arts. The difference between cryptomnesia and plagiarism is whether the person knows that they are recycling the work of another artist. George Harrison of Beatles fame may have plagiarized My Sweet Lord from another musical group (this was the interpretation of the court in the ensuing lawsuit), or he may genuinely have mistaken his memory of the melody for his own creation. This apparently also happened to Umberto Eco, author of Name of the Rose.

In a way, every creative person has a gnawing fear that he or she will unwittingly steal ideas from someone else. I write books; how can I possibly know if I stole an idea from a book that I read maybe forty years ago? I would need a list of every book I have read since I graduated from high school. What kind of nerd would keep a list like that? Me, that’s who. My complete list now contains 1,411 titles, the last of which is The Search for Bridey Murphy. I can always scan the list before sending a final fiction manuscript to a publisher. This does not guarantee that I did not steal a plot from a forgotten movie or an episode of Perry Mason. (In the latter case, I have also kept a list of the Perry Mason episodes I have watched. I used one for an endnote in my most recent book. God, I am such a nerd.) I steal plots from the Bible all the time, but I am aware of what I am doing.

It gets even more complicated. Someone may absorb an idea from the surrounding culture and mistakenly think it is his or her own. This is called a Zeitgeist (a German word for “time ghost”). Science writer Loren Eiseley (Darwin’s Century) famously said that Charles Darwin got the idea for natural selection from Edward Blyth, without realizing it, because it was an idea already floating around in scholarly culture. Probably nobody believes this anymore, since all of Darwin’s contemporaries seemed genuinely surprised at Darwin’s creative hypothesis. Darwin thought of natural selection a long time before Alfred Russel Wallace, but he worried himself sick that it would look to the world as if he had stolen Wallace’s idea. Fortunately, Wallace happily acknowledged Darwin’s priority.

None of this proves that reincarnation does not exist. It just means that evidence, like that of Bridey Murphy, is not good enough.

The scientific way of thinking can help us understand almost anything better than other ways of thinking. This even includes reincarnation.