A Scripture Verse for Scientists

The last thing that even religiously-inclined scientists might expect is a Bible verse that describes the spirit of science. But such a verse exists. It is Mark 4:22, also found in Luke 8:17: Nothing is hidden that shall not be revealed.

The verse was referring to secrets that we think nobody will ever find out about. But new scientific procedures can reveal old crimes. For example, when the Bolsheviks executed the family of the last Czar of Russia, and buried their bones, they assumed the bones would never be identified. But, decades later, DNA technology made the identification possible. 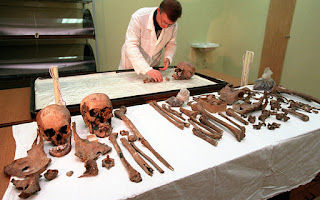 This is the idea behind forensic science, everything from forensic psychology to forensic entomology. In case you have not heard of forensic entomology, it is the study of insects and their traces to find out more about the circumstances of a death. Knowing about which maggots and other insects are in or have been in a corpse can reveal the length of time since, or the season of, the murder.

You will not get away with it! Our scientific technology will find you!

This is what science is all about: seeking to reveal hidden patterns and truths in the natural and human worlds. There is nothing that scientists consider to be “off-limits” to inquiry. This even includes the psychological processes that underlie religion and what is often called the human soul. How can a person have a brain and a soul that seem to be mirror images of one another? Would it not be simpler to say that it is unnecessary to invoke a soul in order to explain the human phenomenon?