Why You Are Not a Prairie Dog: More Insights from Loren Eiseley

I have recently been reading essays by Loren Eiseley, a paleontologist of the middle twentieth century. His books, such as The Firmament of Time and The Immense Journey, were considered epics of popular science writing at the time they were published. Many of his essays are very well-written, and I recommend him to any of you who like classic nature writing.

One of his essays, The Slit, is about a time in which he went down into a cavern and dug out a mammal skull from shortly after the extinction of the dinosaurs. Primates, the order to which humans and other apes belong, started to diversify right after the dinosaurs became extinct. One of the directions that they diversified was into arboreal forms, living in the trees. And that is where most of them still are, except for baboons and people. Another direction was to live by burrowing in the ground out in the newly-spreading grasslands. These primates eventually became extinct. Why? It was probably because of another order of mammals that was evolving and diversifying at the same time: rodents, which includes prairie dogs and ground squirrels. [Here is a photo I took of a prairie dog in the Badlands of South Dakota in 2000.] 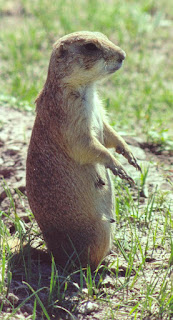 Very early in the Cenozoic Era, it was not clear which direction mammalian evolution might take. Out in open prairies, both primates and rodents diversified. But the rodents were more successful, driving the burrowing primates to extinction. Had things ended up just slightly differently, primates might have been primarily burrowing animals, rather than leaping around in trees. And humans might not have evolved.

Another insight I got from reading Eiseley was a possible contributing factor to human intelligence. Our big brains require a lot of oxygen, therefore a lot of blood vessels. Why did our lineage, starting with the amphibians, have such well-oxygenated brains? The answer might be that amphibians evolved not just in shallow water, not just in shallow fresh water, but in shallow fresh anoxic water, so that extra blood vessels were required to keep even their small brains alive. It was this extra vascularization that made the evolution of intelligent terrestrial vertebrates possible.

To me, this was an excellent example of how the slightest change in the course of events can make a huge difference in the evolutionary outcome.