I recently posted a video about the Plant Superhighway. In this video, I am in a weedy field which is turning into a young forest very near a busy highway in Oklahoma. The young forest seems so calm and serene in contrast. But, silent and underground, the plants have superhighways that are just as busy as those built by humans.

As far as this story goes, it is true. But I now realize there is so much more to the story than this. One reason that herbaceous perennials, such as goldenrods, displace the annual weeds is that the annuals have to sprout from seeds, while the perennials have already built up underground reserves and can grow faster in the spring. Bushes shade out herbaceous plants because their stems are higher up in the air; trees, higher yet. But the early-successional weeds, shrubs, and trees have another strategy (in the ecological sense) that promotes their survival and evolutionary fitness. They form underground connections. 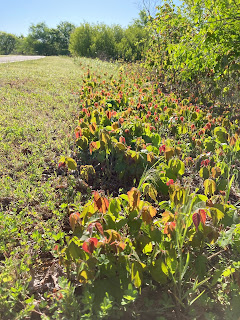 When a goldenrod gets established, it not only puts down its roots and stores up food, but it sends out underground stems to new locations, where they become new plants, genetically identical to and connected to the mother plant. Through these underground stems, food can travel from one plant to another. Any plant that happens to be lucky can send nutrients to the less lucky plants, allowing them to form an integrated whole that secures resources for its use. I first learned of this from the research of David Hartnett and Fakhri Bazzaz at the time when I was in their lab at the University of Illinois.

This integration may be absolutely essential to the survival of early-successional plants; at least, most of them do it. In the video, we see goldenrods and false-goldenrods; sand plum bushes; and even trees such as persimmon, black locust, and honey locust that connected into large, integrated systems. It looks, at least, like individual, unconnected early-successional plants do not stand a chance on their own.

There might also be connections among different kinds of plants, via shared mycorrhizal strands. The “wood wide web” of inter-plant connections may be as important of an explanation of ecological succession as the process of one kind of plant shading another (as explained in an earlier essay and video. These connections dampen the variability of light, moisture, and nutrient conditions. They do this by forming underground superhighways.