Henry David Thoreau was fond of just wandering into the forest and letting Nature teach him things, that is, by pure experience. He considered this much more important than formal learning, from books and classrooms. But if he relied only on experience, without formal learning, he would get nothing out of his romps in the woods other than a vague feeling of happiness and relaxation. It was because he had formal education that he was able to make sense out of the many things that he experienced in the woods. As I walk through the woods, I encounter many people who get nothing more from their hike than a feeling of relaxation, which is in itself a good thing, but I think I enjoy my ramble in the woods more than they do theirs.

Actually, they aren’t rambles. I always stay on the trail like a good citizen. John Burroughs would stay on the trail and use the bridge, while Thoreau, or John Muir, would pick their way through the woods and jump over the creek.

We need both formal education and continually renewed experience. Here are two examples: 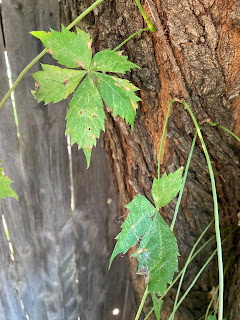 These are the sorts of plants I would not include on lab practicals. Had I included the three-leafleted creeper, a student would have said, But you told us there were five.

One habit that Thoreau had more than almost anyone else, and which we must all cultivate to be wise and happy, is close observation; and, in addition, asking questions about what we see. My former students may forget most of what they learned from me in class, but if they keep looking at the things in nature, they will continually renew their knowledge of things such as poison ivy and Virginia creeper.