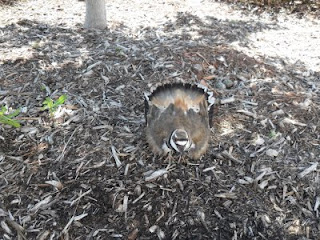 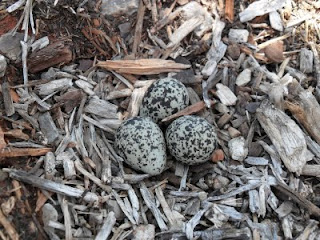 One of the most popular of the participants in the Evolution 2011 meetings at Norman, Oklahoma was not even a human. She was a killdeer.

Killdeer are plovers (birds) whose nests are simple depressions on the ground. Their eggs are spotted, and the mothers choose splotchy-colored brownish places to lay their eggs (see photograph). Killdeer have been extremely successful, and are found along the edges of parking lots over much of North America. You have probably seen them, running along very fast, with white fronts and two black bars on their breasts, and calling out “killdeer, killdeer.”

A mother killdeer made her nest in the mulch near the parking lot at the convention center where Evolution 2011 took place. I parked my car right next to it a few times. When a human first approaches, the mother killdeer starts calling, then spreads her wings to threaten the intruder (see photograph). Then she runs off a few meters away, falls on her side, and exposes inner feathers in such a way that she appears to be injured. This behavior may draw the attention of the intruder away from the nest and toward the mother bird, who is pretending to be an easy piece of meat to catch. If the intruder approaches her, she runs off a little further and repeats the process.

As the mother killdeer was putting on her show and making a lot of noise, right as many attendees were leaving for lunch, a little crowd gathered around my car to watch and marvel. They were marveling at one of the most interesting examples of altruism.

The mother bird is putting her life at risk to protect her eggs. But it is worth the risk, because when the little birds hatch, they will carry many of her genes into the next generation. The evolutionary principles—kin selection and inclusive fitness—are east to understand, but always marvelous to behold.

I am the author of Life of Earth: Portrait of a Beautiful, Middle-Aged, Stressed-Out World, recently published by Prometheus Books. See my website for more information.
Posted by Honest Ab at 9:44 AM