Evolution 2011: Evolution is Alive and Well 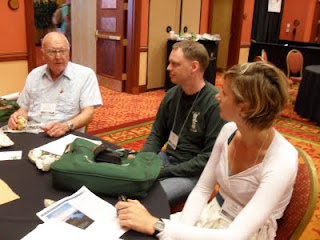 I have just returned from the Evolution 2011 meetings in Norman, Oklahoma. This is the pre-eminent meeting of evolutionary scientists in the world, sponsored by the Society for the Study of Evolution, the American Society of Naturalists, and the Society for Systematic Biology. Anyone who thinks that evolutionary science is based on very little evidence should experience the flood of data reported at the Evolution meetings every year. All over the world and in every group of organisms, the evidence continues to pour in that evolution is occurring all around us and has been occurring for billions of years. Those of us who have been around longer took special effort to encourage the graduate students and postdocs who have done amazing and creative research.

I will briefly mention three of the graduate student papers that I found particularly interesting.

Sarah Ann Bodbyl Roels (University of Kansas) conducted an experiment in which bees selected floral traits in a monkeyflower species for several generations. Both the treatment and control were inside of identical greenhouses, with the bumblebee hive inside one of the greenhouses. This is a particularly good example of experimental design.

Carolina Bonin (Scripps Institute, La Jolla) obtained DNA samples from seals near Antarctica to determine patterns of paternity in a population that had been driven nearly to extinction. Getting DNA from a male seal is not an easy task; you have to run up with a sample vial on a pole, poke the male to get a blood sample, and run like hell as the male flops along after you. Impressive work.

I was most impressed with the work of Kelsey Byers (University of Washington), who has figured out which chemicals stimulate the bumblebees that pollinate monkeyflowers. She did this by inserting electrodes into the exposed brains of bumblebees, and measuring electrical stimulation in response to different volatile chemical components of nectar. This is a very creative approach to the study of pollination.

The meeting was also an opportunity for people from all over the world to talk about what is happening on the creation/evolution front. Oklahoma is perhaps the world epicenter of creationism, and visitors from other countries wanted to know what is going on here. In the photograph, Vic Hutchison (the grand old man of evolution education in Oklahoma) talked with foreign students Bjorn Ostman (originally from Denmark) and Olga Dolgova (originally from Vladivostok, Siberia) about the evolutionary political scene in America.

Organizing this meeting and making sure that everything happened on time for the hundreds of participants was a big job, and I want to thank Rich Broughton, Larry Weider, and Ingo Schlupp, all faculty members at the University of Oklahoma, for their amazing work in making this meeting a success.

I will post two more entries about the Evolution 2011 meetings.

I am the author of Life of Earth: Portrait of a Beautiful, Middle-Aged, Stressed-Out World, recently published by Prometheus Books. See my website for more information.
Posted by Honest Ab at 12:49 PM