I spent the afternoon of my 55th birthday driving up a lonely road between expansive cattle pastures in the coastal mountains of California. There were few other vehicles. As I climbed the hill, grasslands gave way to savannas of valley oak (Quercus lobata) interspersed with digger pine (Pinus coulteri). Some of the oaks were massive. My goal was near the town of Parkfield, which is so small that you cannot be sure if you have passed through it. I was looking for a little bridge.

I found the bridge. It spanned over what looked like a little arroyo with cattails and willows (Salix lasiolepis) in the tiny bit of water at the bottom. But it was no ordinary arroyo. It was the San Andreas Fault. According to geological websites, the Parkfield bridge is the only bridge in the world that connects two continental plates. This may or may not be true; several highways, including state routes 46 and 41, must also cross this fault. And the fault has several branches. But this is the only place where a sign proclaims, “San Andreas Fault: entering North American Plate” on the west side, and “entering Pacific Plate” on the east.

This was an irresistible geological and evolutionary pilgrimage, one at which I made one of my Darwin Youtube videos, because continental drift has revolutionized our understanding of the world. Crustal plates constantly move; the Pacific Plate is moving northwest at the pace that fingernails grow. Usually it does not move at all, but as pressure builds up the plate lurches, causing an earthquake. This has not happened recently at Parkfield. Therefore it is not a deep chasm into which you can look and see hell; its recent immobility has allowed sediments to fill it in. The continents, consisting of lighter rock, are thrown around by the crustal plates. Geology has never been the same since the discovery of continental drift. Neither has evolution. We now understand one of many processes that separate an ancestral species into separate populations, allowing them to diversify into new species. The population can be divided as a crustal plate carries part of it away. 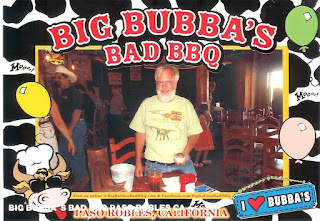 There is a story of cultural evolution going on in nearby Cholame, which is just a restaurant on Highway 46. At this location in 1955, James Dean died in a car crash. To many of us, James Dean was not that great of an actor; a friend of mine said he always had a constipated look on his face. But he became a hero in Japan. A Japanese man, Seita Ohnishi, donated money to construct a granite monument around a tree-of-heaven near the restaurant. He compared Dean’s untimely death to the death of cherry blossoms (what else?) at the prime of their beauty. Seita Ohnishi was not speaking just for himself, but for thousands of Japanese. Now, you might guess I will tie this in with evolution somehow. James Dean left a cultural legacy, more so in Japan than in America, which has far exceeded any biological fitness he might ever have had. Culture is not unique to humans, but it is a unique form of human evolutionary fitness.

I found a restaurant in Paso Robles (El Paso de los Robles, Oak Pass), Big Bubba’s Bad BBQ (bad here meaning good, like a retinal afterglow), which offered a free birthday meal. What perfect timing. All I had to do was to allow myself to be regaled by a birthday chant and have my picture taken.

I have now posted the YouTube video of Darwin walking over the San Andreas fault.

Note: Someone posted a comment on a previous entry, but when I click on it, my computer goes into an unresponsive mode. I have not read the comment but I suspect that someone has inserted a virus. Beware!  Update: The problem was apparently a computer glitch caused by Google. The comment was not a virus.
Posted by Honest Ab at 4:37 PM