From Paso Robles (see previous entry) I headed south to Lompoc, which is known mainly as an agricultural center with vast fields of broccoli, artichokes, and flowers; and as the city closest to Vandenberg Air Force Base. My parents and I briefly lived there over thirty years ago. Every afternoon, a strong sea breeze blows in, bringing mist and fog. One time I saw it blowing a refrigerator box down the street. Not every part of coastal California is a tropical wonderland.

My main purpose was to visit the Purisima Hills, north of the city. Although just a few square kilometers in extent, perhaps the largest diatomite deposit in the world is found here. I made a Darwin video there, in which Darwin had been reading Hemingway’s Hills Like White Elephants, and had been expecting to learn something about the hills, but instead it was just about a man and a woman in a bar. But the Purisima Hills are really white, because they consist almost entirely of the shells of dead diatoms that accumulated over hundreds of thousands of years starting about five million years ago. I have not posted the video yet.

The reason this place is of great interest to science educators is that it represents absolute proof that geological deposits could not have been produced by a Flood of Noah. These are not flood deposits. They formed from dead diatoms that accumulated undisturbed in a shallow sea, without the intermixture of very much sand, silt, and clay. Mineral deposits are found nearby, but the diatomite deposits are nearly pure. And they represent more diatoms than could exist at any one time in one place. There is no way a Flood could have produced this, unless God decided to filter out all the diatoms and slop them down in one place, for reasons that are unknown and certainly not found in the Bible. Of course, creationists think that God scooched all the large mammals into some places, all the dinosaurs into other places, to make it look like they lived at different times, just to play with our minds today. But diatoms? What kind of God would play with our minds by scooping billions of diatoms and slapping them down in one location, which ultimately became Lompoc, California? Diatoms float because they produce oil. The diatomite deposits also contain petroleum, which is in this case the transformed product of diatom oil. That’s why there are no side roads on which I could retreat to make my video away from highway noises: all side roads are blocked and posted with serious oil-company no-trespassing signs.

Also at this location is a small population of bishop pines (Pinus muricata). Like Torrey pines near San Diego, the bishop pines grow and produce mature cones, but the cones do not open and release seeds unless a fire burns them. Then the burned forest is immediately replaced by a solid growth of small pines. There was a fire in the Purisima hills about 1964, and another in 1995. These pines (like Torrey pines, Monterey pines, and digger pines) are not only adapted to inevitable fires but capitalize on them.

Not only is the fire cycle an interesting adaptation, but also the pines represent an example of evolutionary radiation. Different species of pines have evolved in different locations in the coastal California hills: Monterey pines south of San Francisco, bishop pines south of them, digger pines throughout the coastal hills, and Torrey pines near San Diego. In addition, the Purisima population of bishop pines are genetically distinct from the main population, which is found over a hundred kilometers north of the Purisima Hills. Speciation at work.

The Santa Ynez Valley, adjacent to the Purisima Hills, is also famous for having the world’s largest species of lichen, Ramalina menziesii. The strong winds bring moisture and minerals to these impressively long lichens that hang from the branches of the Quercus agrifolia coast live oaks. Lichens themselves are a wonderful example of symbiosis, and of symbiogenesis, which are major forces in evolution. 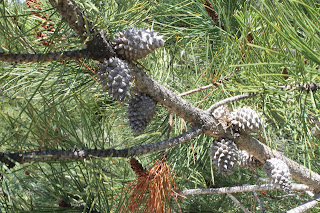 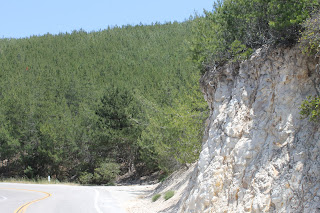 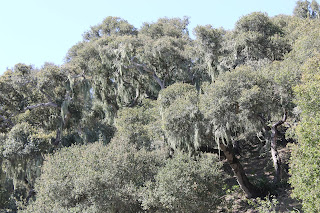 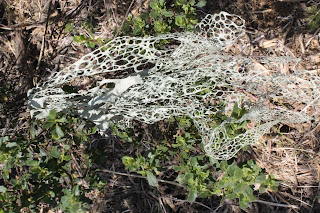 Note: I have posted a video on my YouTube channel that shows the Transit of Venus as the sun sets into the Pacific Ocean. I have also posted a YouTube video about my visit to the San Andreas Fault, described in the previous entry.
Posted by Honest Ab at 10:35 AM