Evotour, part nine. Races of the Human Species: A Visit to Manzanar 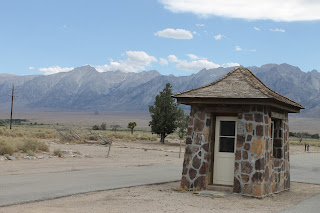 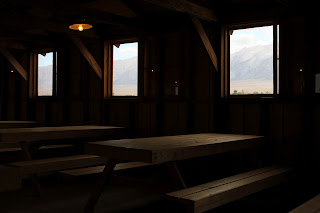 Owens Valley, just east of the central Sierra Nevada, is a place of open, windswept desert scrub. The desert is formed by the rain shadow of the highest of the Sierras, which tower immediately above it. Because there is little rain, and because what little bit of water there is has been mostly claimed by the Los Angeles Department of Water and Power since the early twentieth century, there is little development. The desert sweeps up from the valley to the peaks with hardly any interruption. The beauty is almost heartbreaking. To the east, another range of tall mountains (dominated by White Mountain) rises almost as high as the Sierras.

The slopes of Owens Valley look almost the same today as they did in 1942. This was that year that the United States government, at war with the Empire of Japan, established the War Relocation Administration. Its directive was to relocate all people of Japanese origin from their homes into internment camps. Because they all had to sell their homes at once, the bottom fell out of the market, and they received a pittance for their property. They had to leave everything behind and live in barracks at the internment camps, spread widely over the American west. The thin-walled barracks were cold in the winter and hot in the summer. One of these camps was Manzanar, located near the present day town of Lone Pine. When the war ended in 1945, the Japanese were released, after being given $25 each.

The injustice of this action is well known. The internees were all Japanese Americans, most of them issei (first-generation immigrants) or their nisei (second-generation) children. They were American citizens who lost everything without due process of law. The issei had come to America to become Americans. Hardly any of them had any loyalty to Japan. Whole families were relocated. Because no such action was taken against German or Italian immigrants or their families, the Japanese internment is widely and correctly considered an example of racism. Germans, Italians, and Japanese Americans were related to the people of enemy nations, but only the Japanese were not white.

The Japanese, and the white American soldiers who supervised them, made the best of it. The internees had an amazingly positive attitude. They founded their own newspaper, the Manzanar Free Press. In the first issue of this paper, April 11, 1942, the headline read, “Manzanar Booms into Valley’s Biggest Town.” A small section on the front page read thus: “The citizens of Manzanar wish to express in public their sincere appreciation to General John L. DeWitt and his Chiefs of Staff…for the expedient way in which they have handled the Manzanar situation. The evacuees now located at Manzanar are greatly satisfied with the excellent comforts the general and his staff have provided for them. ‘Can’t be better,’ is the general feeling of the Manzanar citizen. ‘Thank you, General.’” Manzanar was an internment camp, not a concentration camp. Despite the inherent unfairness of the situation, the white rulers appeared to have done their best to keep the internees safe, clean, comfortable, and happy. The mother of a childhood friend graduated from high school in Manzanar. She said that they did not suffer.

What does this have to do with evolution? Quite simply, it is that when altruism evolved in the human species, it facilitated cooperation and friendship within groups but was often fed by antagonism toward other groups, especially if those other groups looked different. Racism is part of the flip side of altruism. And yet, antagonism toward outsiders is something that we can unlearn. Children who are raised in multi-ethnic neighborhoods have no problem forming altruistic bonds with members of other races. One of the biggest transformations in the human species during the past century has been the gradual, uneven, and partially-successful dissolution of racism.

During World War 2, the federal government was reeling with confusion, fighting a war on two fronts, trying to accomplish massive tasks in incredibly short spaces of time. And they got some things wrong. The War Relocation was one of them. They may not have even recognized the racism behind it. They got other things wrong too, such as the firestorms that incinerated thousands of civilians in Germany and Japan, and, of course, the atomic bombs dropped on Hiroshima and Nagasaki. Altruism is instinctual, but the way we use it is determined by culture and by collective decision. The best we can hope for is that we learn from the mistakes of the past.

One of the lessons of Manzanar is that, when sudden social or political disruption occurs, altruism can be one of the first things lost. It can get trampled by confusion and wrath right at the time we need it the most. This is what happened in the former Yugoslavia when the Soviet regime collapsed, and in Rwanda when resources became scarce. I wonder if it could happen in American society today, where many outspoken people, most often of the extreme conservative persuasion, talk as if people who disagree with them are not their fellow citizens or not even worthy of human rights. Are they just talking, or should we believe that when they stockpile weapons they might actually have a use planned for them? All I can do is to preach the gospel of altruism and hope that as many people as possible believe it, so that those who would take extreme measures in a time of crisis will be as few as possible. 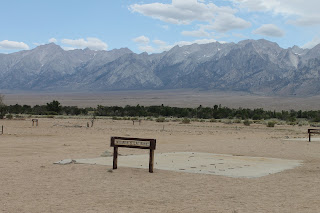