On Saturday morning, we gathered for our respective field trips at Black Mesa State Park way out in the panhandle of Oklahoma. Many students were required to take some of these field trips. One of them started at the crack of dawn, or even before: Bill Caire of UCO led an excursion to collect mammals from traps. Not to scare any of you campers, but you might as well know. Bill and students found a bear track in the mud in the camp. Black Mesa, way out in the shortgrass prairie, is not where you might expect to find this.

But the rest of us started our trips at 8:00 or 8:30. I went on a local botany hike led by Gloria Caddell of UCO. The bluffs had a lot of shortgrass prairie species, plus a few scrubby trees, mostly netleaf hackberry (Celtis reticulata), soapberries (Sapindus drummondii), one-seed juniper (Juniperus monosperma), and fragrant sumac (Rhus aromatica). We had left most of Oklahoma, with its ubiquitous red cedars (Juniperus virginiana), behind. We also got help from Northeastern State botanist Suneeti Jog. 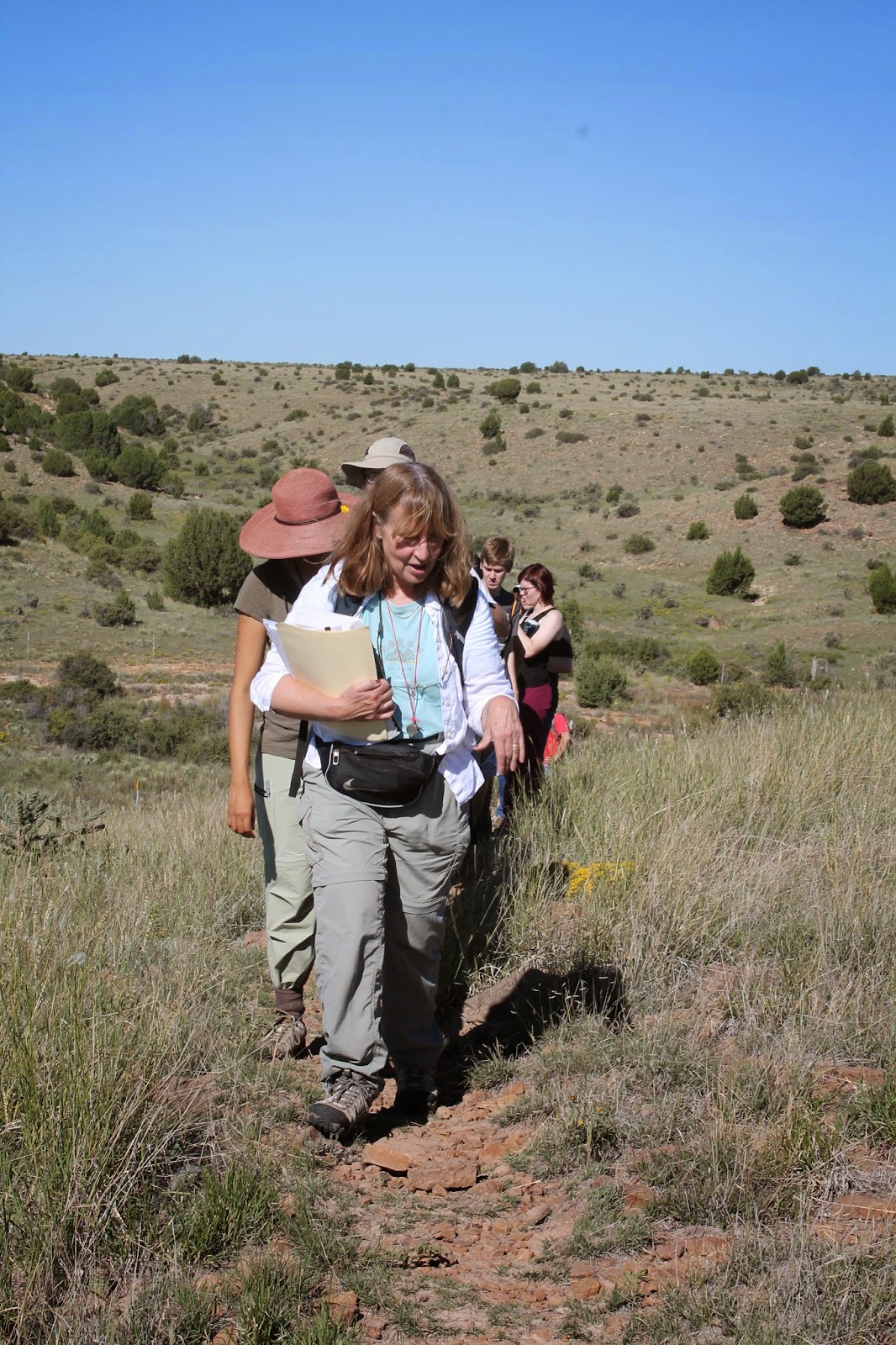 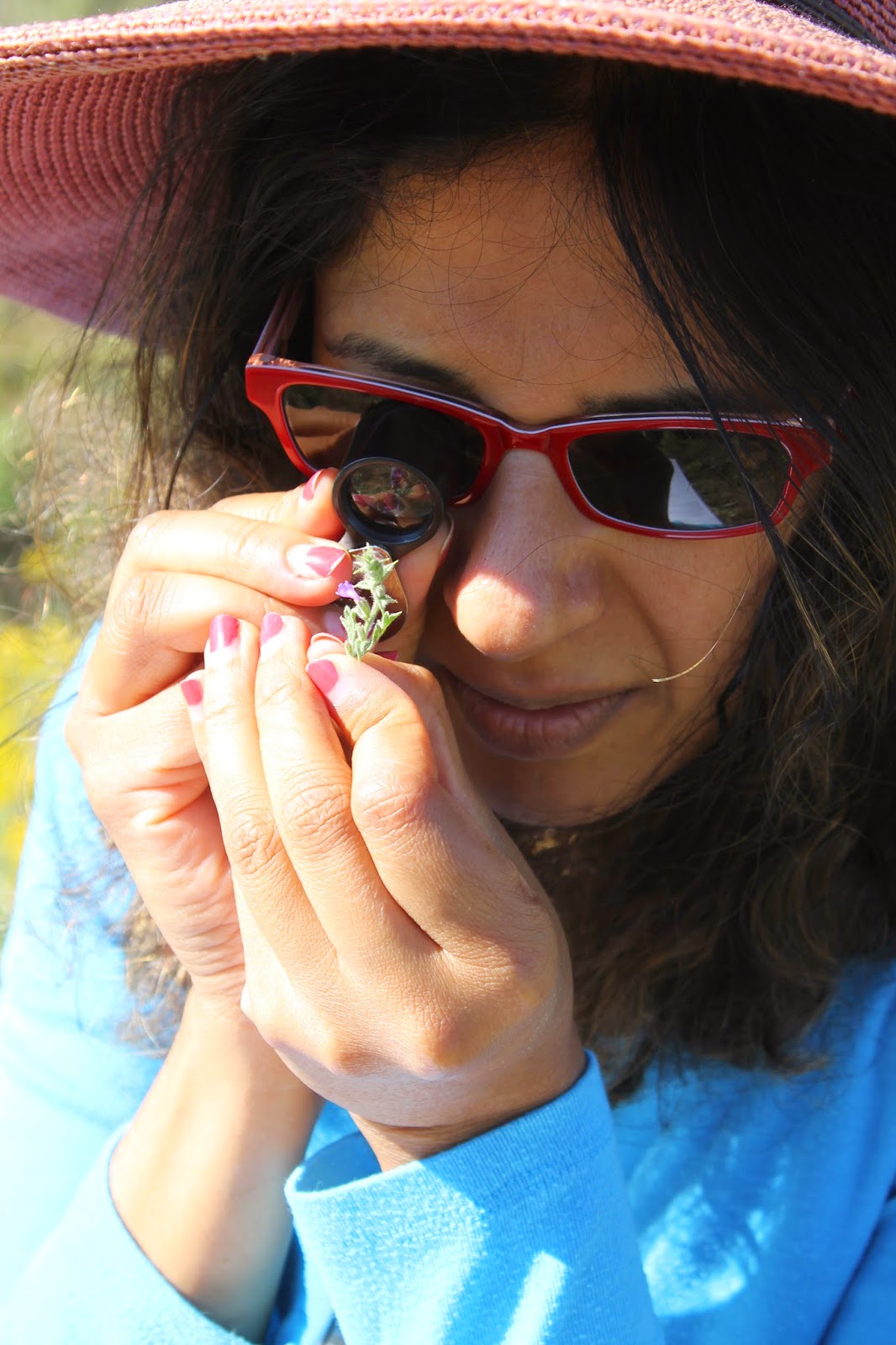 At least we thought it was going to be a botany hike. But we had not even gotten up onto the bluff before we found a snake failing to hide itself in a cholla cactus. That is, we saw more herps on this trip than did the people on the herpetology trip. 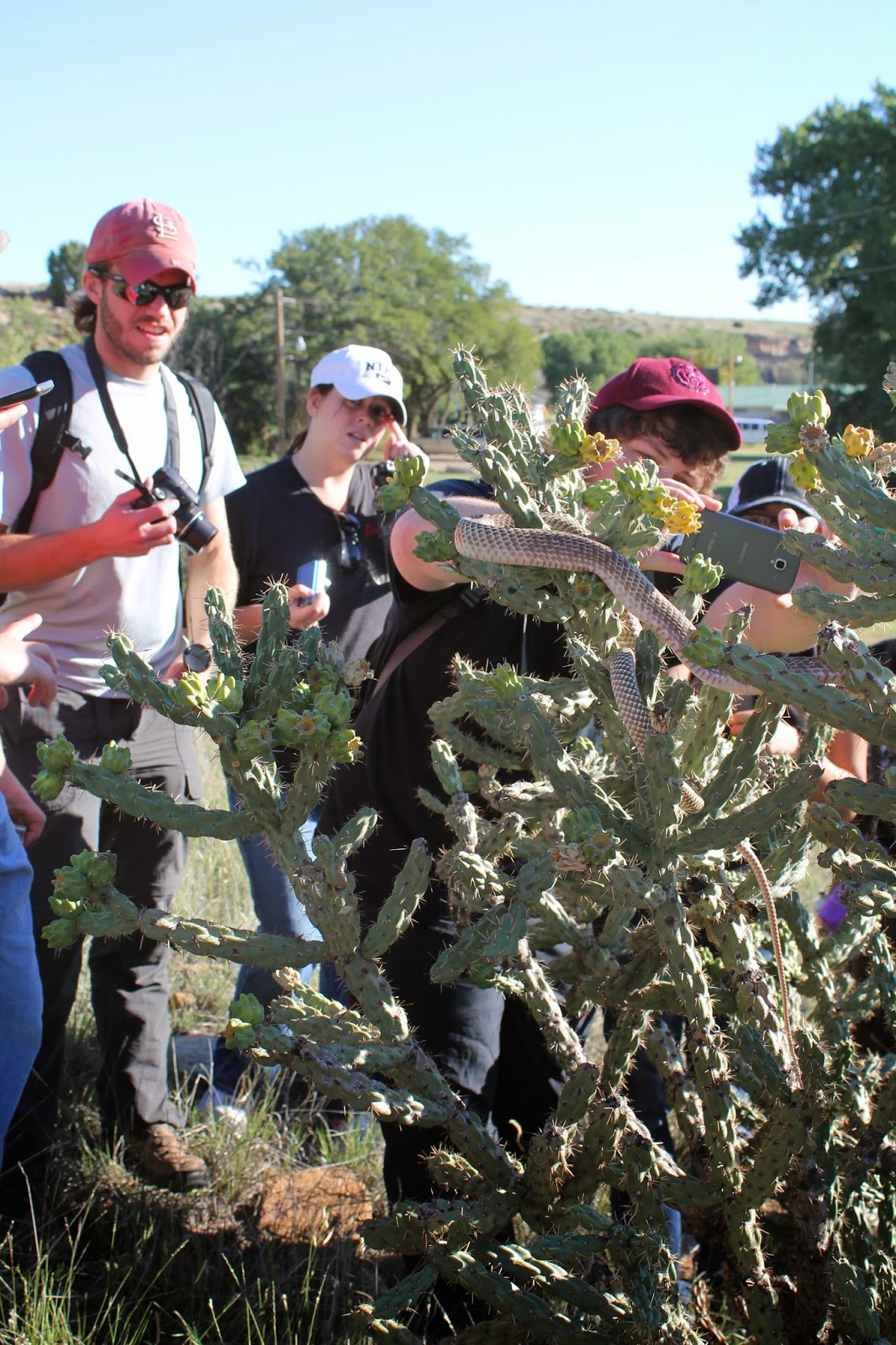 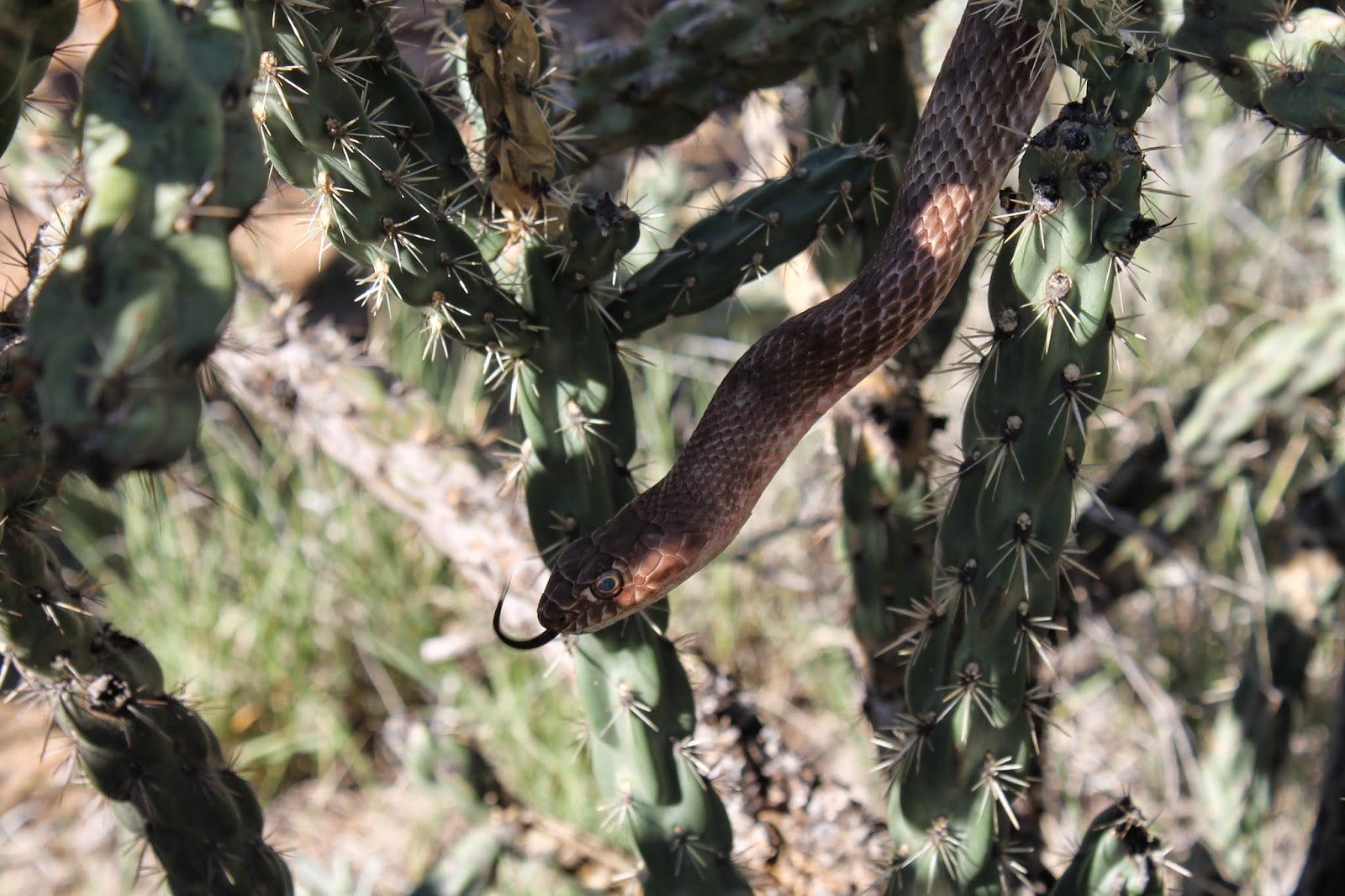 Some of us got into the trip with all of our senses. Of course, we could see the beautiful flowers. We learned that you have to look closely. To see, you have to do more than glance. Gloria identified for us no less than eight species of composites that had yellow ray or disc flowers. But we also got to feel the biota. For example, Grindelia gumweeds actually exude enough gum to make them look like goblets of cream. Of course, it felt gummy. But some of us got to feel three different kinds of pain. First, a tiny plant called Tragia has almost invisible and very nasty stinging hairs. And the beavertail cacti have big thorns—which poked some of us—and the even nastier little hairs, which got in my hand when I ate a cactus fruit, and which got in the lips and tongue of a less fortunate person. And I definitely felt the spiny tip of the yucca leaf that I accidentally and barely touched—it was like getting poked by a sword. 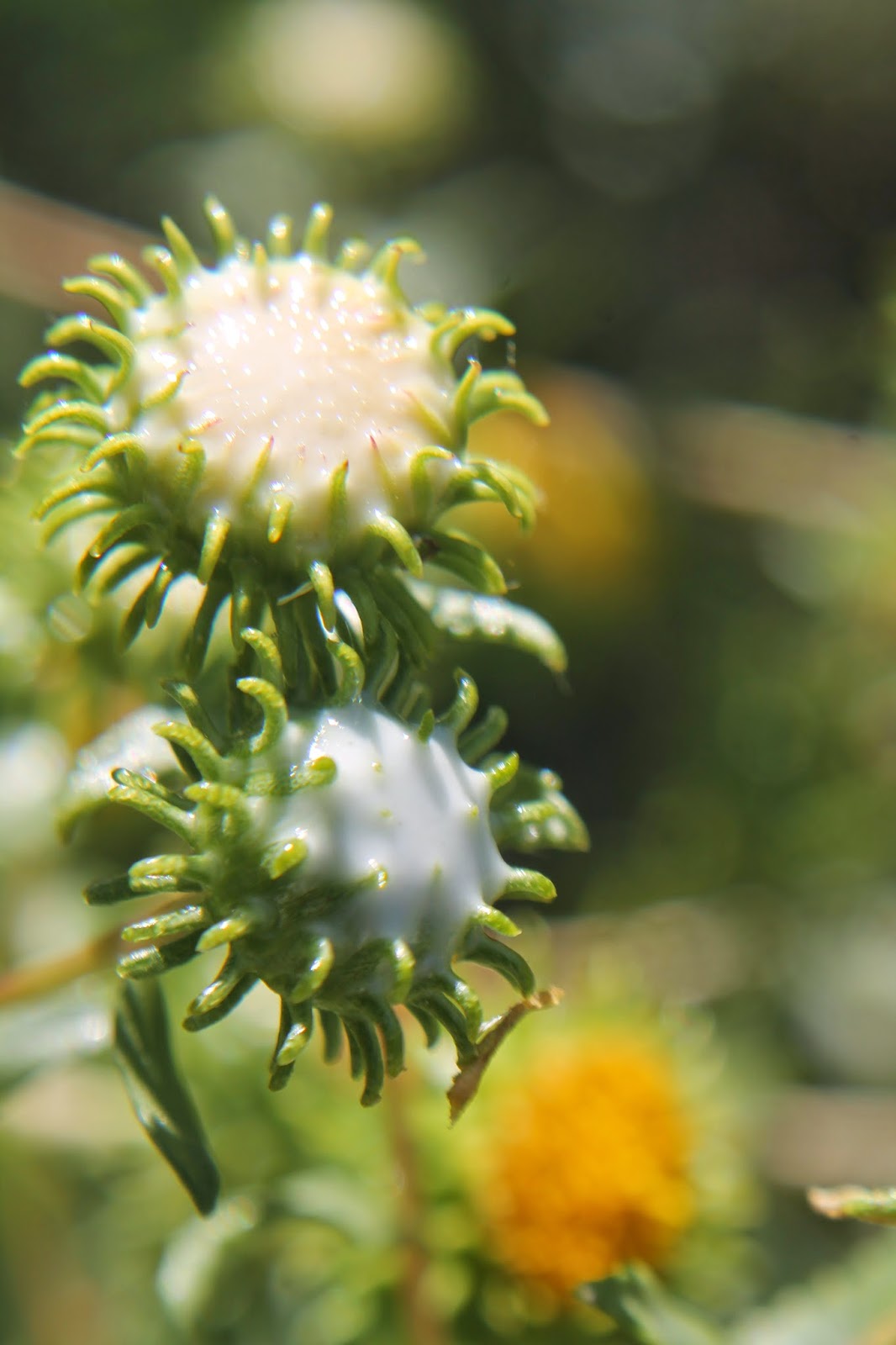 But we also used our senses of taste and smell. The cactus fruits tasted fresh and slightly sweet. And the buffalo gourd’s scientific name is Cucurbita foetidisssima, which means “the most foul,” which some people discovered to be truly the case. And next came a perfect example of how terminology can bias perception. Gloria wanted to know what we thought the fragrant sumac smelled like. Nobody had any really clear idea. But when she told us that one of the plant’s names was skunkbush sumac, of course we all started imagining that, yes, indeed, it smelled like a skunk.

Finally, we could hear the wind in the grass and the tree branches. There you have it—all five senses. Gloria showed us almost as many plants before we got on the nature trail as after; I wonder how many casual visitors think that nature exists only on the other side of the Nature Trail sign!
Posted by Honest Ab at 12:47 PM