The Drama of Global Warming

Well, today I started teaching my general biology class about global warming, as I do every semester. Since I write science books (of which I have published four) and novels (thus far unpublished), I began thinking about why global warming is not a more prevalent theme in fiction. I thought about this as I walked to work. Walking is a good way to promote health but also to save energy and reduce carbon emissions. It is also a good time to think.

Global warming does figure prominently in most of the future scenarios of science fiction novels. However, the global warming that is occurring right now is largely absent from fiction. Why?

The main reason is that global warming is very real and is accelerating, but is still a largely gradual process. It is occurring over a time scale that does not lend itself to a plot line very easily. You can’t see it. You can see weather, but you can’t see climate change. You could write a novel about a big storm, but there have always been big storms; the novel would be about the storm, not about climate change. It is impossible to say that any particular storm (such as the one occurring right now in the Northeast) is or is not due to global warming. Any particular storm may or may not have occurred even without global warming. All we can say is that global warming is making storms stronger in general. How do you get a plot out of that?

There have been at least three movies or books based on global warming, and they illustrate three approaches to making fictional drama out of global warming.

First, in the 1990s, there was a TV movie called The Fire Next Time. The approach it took was to show how global warming shattered a family’s personal economy (the main character was a gulf shrimper) and how they came back together in the end. The plot was about the family, with global warming just being the background setting.

Second, a few years back, the movie Day After Tomorrow showed incredibly dramatic weather events. The movie started with a sudden fracture of an ice sheet and ended with a huge storm paralyzing New York City (even worse than the one that is descending upon them this week). This movie derived its plot line from exaggerating the trends of global warming. The ice is indeed melting (according to a study I read about today in the French media but have not seen in the American media yet), but it is usually hard to see. Antarctica still has a lot of ice. 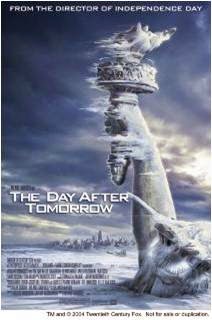 Third, who could forget one of Michael Crichton’s last novels, State of Fear? In this novel, Crichton depicted all scientists, except a few brave outsiders, as filthy liars who have not merely invented global warming but who are actually causing the breakup of glaciers by setting off bombs! Scientists are part of a worldwide conspiracy, and they track down the true heroes (the ones who believe everything the Koch Brothers say) by following them in their evil blue Priuses. It was a poorly written novel that strained credulity so much that it was a third-rate piece of hack work. Every plot component was weak. This, from the man who wrote much better books such as Andromeda Strain and Jurassic Park?

None of these works are actually about global warming. Is it possible to have a novel about global warming that is realistic yet also dramatic? Maybe one that is set in Bangladesh. Rising sea levels may inundate half of the country—including their incredibly productive agricultural land—this century. Could Bangladeshis flee over the border into India? India is already building a big fence to keep them out. 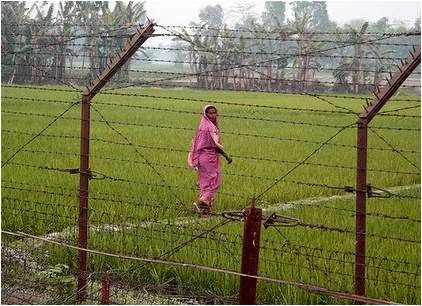 Maybe a young Indian man and young Bangladeshi woman could meet one another and kiss through the fence…I see plot potential here…Aside from something like this, global warming remains a major threat that is huge but slow, and which even those of us who study it have to measure its components rather than actually seeing it.
Posted by Honest Ab at 9:13 AM