The Nearly Infinite Capacity for Adjustment

The human brain has a nearly infinite capacity for adjustment to circumstances, so long as these circumstances are not immediately lethal. And this is not necessarily a good thing.

People often think of the environment in which they grew up as beautiful, even if such an environment is, by any objective measure, not beautiful. I keep thinking back to the student I had who considered northwestern Kansas to be the most beautiful place on Earth. To me, it seems that most of the rest of Kansas is actually more beautiful than the flat, agricultural northwest portion of the state.

And people have the ability to adjust their thinking and attitudes even to painful circumstances. They will rationalize to think of their sufferings as blessings. Without their sufferings, they claim, they would not have had certain important spiritual insights. One quick example is a book that was published, and had a very limited circulation, in the 1970s: Thank God I Have Cancer was the title. The author said that were it not for cancer, he would never have discovered the wonders of laetrile.

This is an obvious survival mechanism. We are descendants of people who considered their circumstances good enough in which to make a successful living, or at least to not give up. Even slaves developed a culture of stories and music, not allowing themselves to be turned into mere machines.

But there is a bad side to such irrepressible optimism. It doesn’t take many generations, perhaps only one, for people to forget beauty and blessings that are lost. As a botanist and lover of forests, one example I immediately think of is that we no longer notice that our American and European forests are ghosts of what they used to be. It is true that there are forests all over the place in the eastern U.S. and in the western mountains, but most of them are second-growth forests that have recovered from logging. Gone perhaps forever are the huge old trees that once dominated these forests. The two-meter-thick tulip poplar trunks that Thomas Jefferson and James Madison saw on one of their horseback trips were not all that unusual. We assume that the forests of comparatively small trees that we see today are the way these forests have always been. Our minds invest them with great beauty; the grandeur of the old forests is forgotten. This bur oak tree in Oklahoma looks big, but by the standards of an earlier century would be small for an eastern deciduous forest. 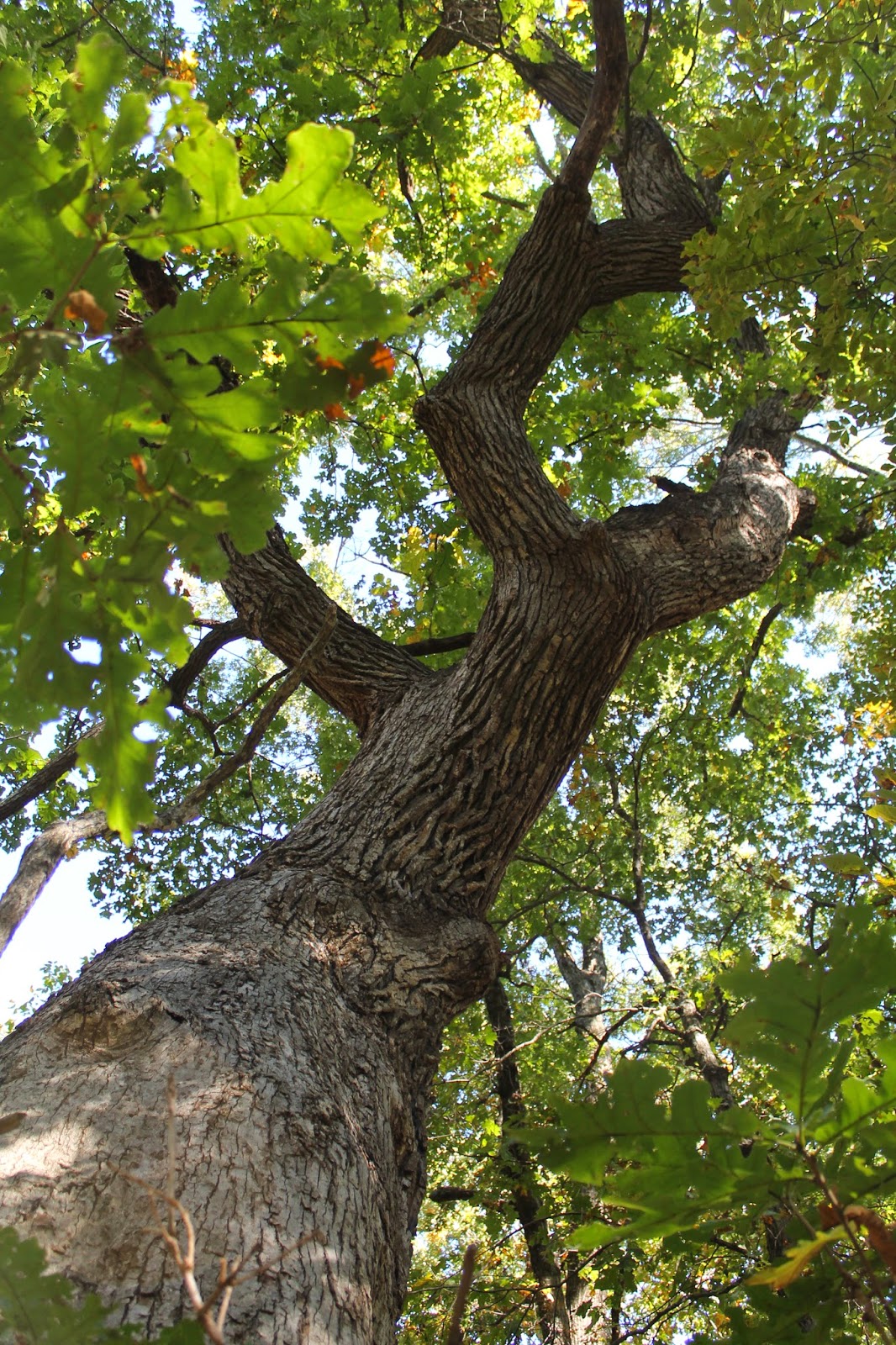 Global warming is starting to kill our forests. But there will still be forests in the next century. It is nearly certain that all of the sugar maple and beech forests in America will die; these species will persist only in Canada. Maybe most of the oaks will die also. There are oaks that can persist in relatively warm and dry conditions, such as post oaks. But post oaks cannot disperse to and grow up in dead black oak or white oak forests fast enough to keep them looking like oak forests. There are, however, trees that can grow rapidly and adjust to the fluctuations of temperature and moisture that come with global climate change. Examples include introduced mulberries (such as the white mulberry) and trees of heaven. There may be hikers in the twenty-second century who will exclaim at the beauty of the forests of mulberries and trees of heaven dominating the Appalachians, not realizing that the great, diverse forests that persisted into the twenty-first century—the ones we see today—have disappeared. They will have grown up loving the beauty of the depleted, skeletal forests around them.

Our ability to love what we see as we grow up may cause us to forget the beauty that we have lost. Oppressed people may grow up loving life despite their circumstances of poverty. Prophetic voices may arise to stir them, but unless they are actually suffering pain and starvation, they may feel that their circumstances are just fine, even beautiful, and they may not rise up to demand release from their oppression. Already the new generations are accepting the fact that they cannot aspire to improvements in life that my generation took for granted. Many people simply accept that having two jobs will barely keep them alive. The stories about well-paid unionized workers may seem like fantasy to them.

Our ability to make the best of, and find beauty in, our circumstances may lead to a world in which people accept, and even enjoy, blighted ecosystems and chronic oppression.
Posted by Honest Ab at 9:13 AM