Okay, I’m going out on a limb here to create an analogy. But we need a little fun once in a while.

My favorite classical composer has, for many decades, been Antonín Dvořák. Every one of his pieces, whether symphonies or smaller works, consists of beautiful melodies, some of the best ever written. However—and I hesitate to criticize this master of music—that’s pretty much all it is. Melodies, strung together, occasionally showing up again in modified form, but not quite fitting together when they do so. The New World Symphony is a good example.

Some of  Dvořák’s pieces, however, do have structure. His tone poems (such as Wodník, or the Watersprite; The Wild Dove; The Noon Witch; and The Golden Spinning Wheel) were deliberately written around old Czech legends. And for other Dvořák pieces, such as Symphony 8 in D major, I have imagined stories. But even in these cases, the structure is episodic rather than woven together as a fabric.

My second favorite classical composer has, for many decades, been Wolfgang Amadeus Mozart. He wrote good melodies too, but within a much more limited range than Dvořák. Most of Mozart’s melodies were various forms of scales. For example, the final movement of his last symphony is pretty much just descending major scales, with some occasional ascending scales. They are incomparably beautiful, though, incomparable to anyone except Dvořák. But Mozart’s melodies fit together. In Dvořák’s music, you could never really guess what was coming next, but in Mozart’s music, everything seems to follow from what came before. You feel astonishment and surprise, only to realize that you should have seen it coming. I have listened a lot to his Gran Partita while following the study score. The twelve instruments fit together to form beautiful vertical chords, yet each instrument has a beautiful melody that interweaves with the others horizontally. A perfect fabric.

Mozart’s music reminds me of smooth layers of limestone, in which every layer is in place. Surprises frequently come in Mozart, as in limestone: unpredictable discolorations caused by various forms of iron, as in the photo. 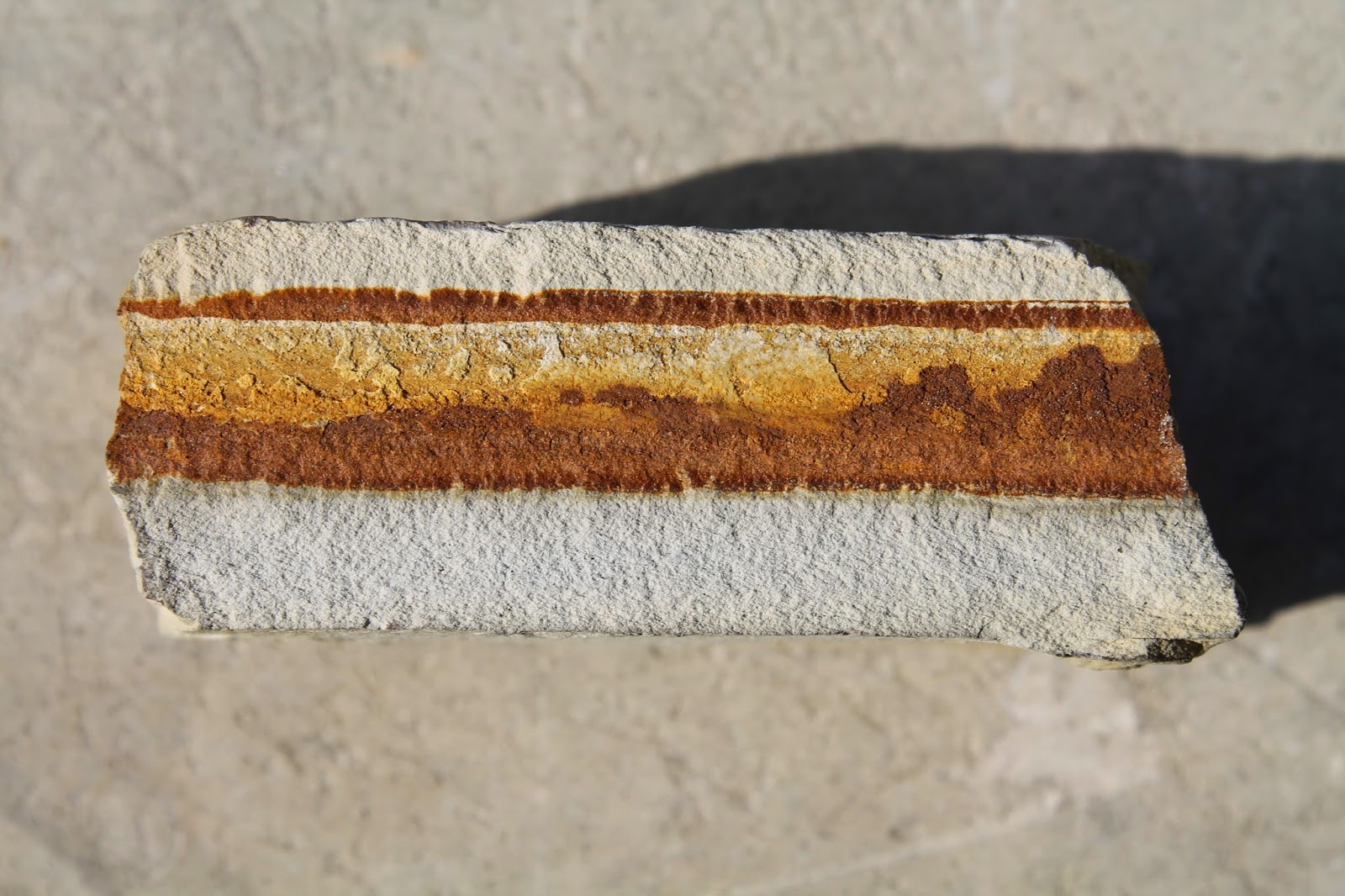 Dvořák’s music, however, reminds me of conglomerate, which consists of a jumble of rocks (frequently limestone in Oklahoma) cemented together by calcium carbonate cement that has leached from the rocks. Each rock is a beautiful surprise, but the overall structure is a jumble. 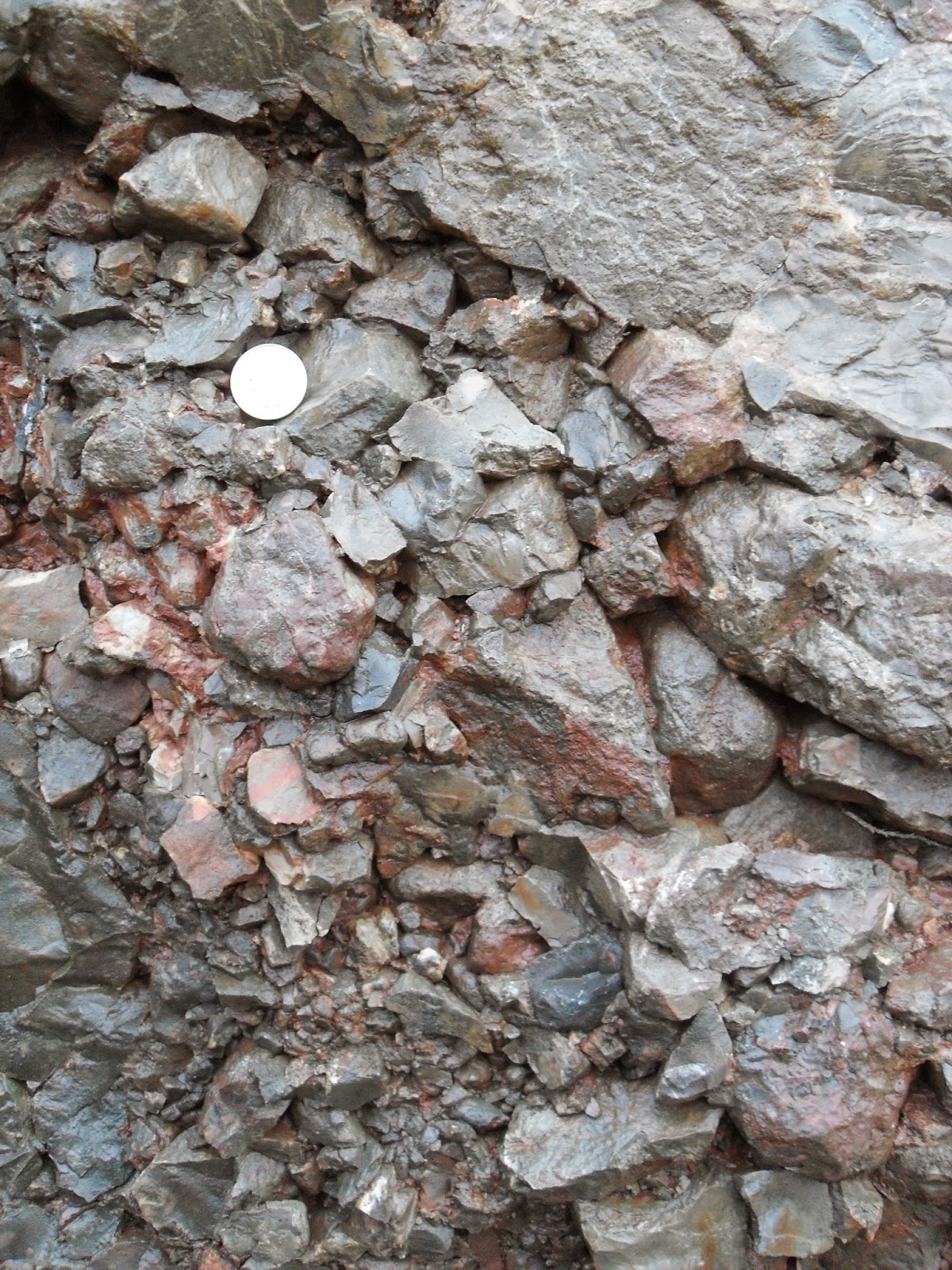 Both limestone and conglomerate are beautiful, but in different ways. I will conclude by noting that some early-twentieth-century academic music (mostly listened to by music professors) reminds me of the alluvium in the bed of the Arkansas River. The rocks have been broken apart into such small pieces that they no longer have any recognizable individual beauty, and they are mixed in with bits of trash in various states of weathering. I know I am not the only person who feels this way about atonal music.
Posted by Honest Ab at 2:46 PM