Where Have All the Flowers Gone?

Some of you have heard of, and some of you may remember that song, from back in the hippie days. That was a very unusual time in American history, when it actually seemed possible that the world would change for the better. And many things did: The Endangered Species Act, the Clean Air Act, and the Clean Water Act all emerged in the early 1970s. It was a time when idealism seemed to have a chance.

I recently found a book from that time: The Greening of America, by Charles A. Reich, a law professor at Yale, originally published in 1970.  Reich was inspired by the student activists he saw at Yale and around the country. And he dared to think that they were going to change the world. His book predicted a new future rather than prescribing one. He considered this new green future to be inevitable.

Right on the cover of the paperback is this quote: “There is a revolution coming. It will not be like revolutions of the past. It will originate with the individual and with culture…It will not require violence to succeed, and it cannot be successfully resisted by violence. This is the revolution of the new generation.” The book quotes, on its frontispiece, Chet Powers and the Youngbloods: Come on people now, Smile on your brother, Everybody get together, Try to love one another right now. Reich thought that this was actually happening and, indeed, could not be stopped.

The protest and rebellion of the new generation, “their culture, clothes, music, drugs, ways of thought and liberated life-style are not a passing fad…The whole emerging pattern, from ideals to campus demonstrations to beads and bell bottoms to the Woodstock Festival…is both necessary and inevitable, and in time it will include not only youth, but all people in America.” It was, Reich thought, the inevitable progress through three stages: Consciousness I, Consciousness II, and Consciousness III.

Well, it didn’t happen. Today, there is virtually no idealism in any aspect of our public lives. The gap between the rich and the poor, the politically powerful and the politically irrelevant, is much greater now than it was then. We have pretty much resigned ourselves to the fact that our future political direction will be determined by corporate interests and the Religious Right. Despite the brief flowering of the Occupy movement a couple of years ago, there is an overwhelming resignation to the idea that big corporations will do whatever they want (they are TBTF), and that politicians will listen only to major donors, and that the working poor will need two jobs just to stay alive and are lucky to have one job. As I write, armed protestors have taken over a wildlife refuge building in Oregon, and are being treated with kindness by local law enforcement, quite in contrast to the attacks made upon the unarmed Occupy protestors. If you are an angry white Republican, all of your views are treated as significant, and you can brandish your guns with impunity; if you are not, just keep quiet, and certainly do not show your guns, if you have them. 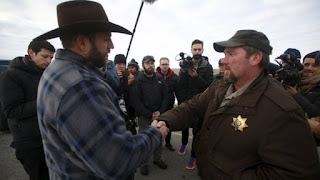 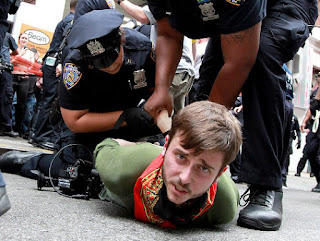 Considering the theme of this blog, I must point out that scientific truth seems to have no importance at all in the direction our society is taking. Angry white Republicans get to impose their beliefs as truth. But back in the sixties, there were “teach-ins” in which the idealistic youth wanted to know as much as they could about the world. This sort of thing is unthinkable today.

I’m not saying the hippies were right about everything. But it is unspeakably sad to see that their idealism is extinct.
Posted by Honest Ab at 12:16 PM