It seems like at least once a week, if not more often, we get news of an unarmed black man being killed by white police officers. When it happened in the city where I live, I started thinking more about what is happening.

I have not seen evidence that any of the white officers were motivated by overt racial hatred. But it appears that there is an underlying racial bias, of which most police officers may not even be aware: a bias that makes them pull the trigger on black men more than on white men. The number of police shootings of black men is way out of proportion to the percentage of black people in the population. It looks as if the idea—conscious or not—of “shoot first and ask questions later” motivates police more against blacks than whites.

White pride groups usually respond to this by saying that blacks commit more crimes, per capita, than whites. This, however, is no justification for having a quicker trigger finger for blacks than for whites. It may explain the higher conviction and incarceration rates for blacks than whites, but not the disparity in police shootings.

And we all understand that mistakes will happen. When a police officer has to make a quick decision, and when he or she thinks his or her life is in danger, there is no time for logical thought. But these are exactly the circumstances under which unconscious bias can have the greatest impact.

It becomes even clearer when you consider how many white men have been shot by black police officers. An online search suggests that this happens about once or twice a year. Here are the examples I found, in reverse chronological order:


This takes us back almost two years. In two other cases I could not determine the race of the police officer who shot the white victim: Castaic, California, and Fresno, California, both in 2016. The killing of Dylan Noble in Fresno made it all over the internet. It looks like a lot of cases until you see how many of them are about the same man, Dylan Noble. There has also been a lot of rage over the police killing of a white youth, Zachary Hammond, in South Carolina in 2015, even though the police officer was also white. 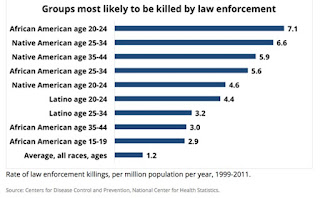 As indicated in the above graphic, Native Americans are even more likely than blacks to be shot by police. As a member of the Cherokee tribe, I took notice of this, although no police officer in a hurry would think I was Native American. If the police killings have an underlying racial motivation, it is not surprising that Native Americans should also be the victims of lots of police shootings.

Racism has deep evolutionary roots and influences the minds and moods and actions even of people who tell themselves that they are not racist. We will make progress only if we admit the problem.
Posted by Honest Ab at 10:36 AM