Animals are playful when they are young. They try everything out to see what happens. Their time is spent in one long binge of hypothesis-testing. This is how they develop a model of the world and how to live in it, a model that can be updated to the changing world at least once a generation, rather than waiting for generations of natural selection to set things right. Unlike most other animals, humans continue being playful when they grow up.

One of the things that playful young humans experiment with is creative writing. And people who, like me, grow up to be writers have put in hundreds or in my case thousands of hours writing (in sheer bliss) by middle age. Daniel Levitin said that a genius is simply someone who has practiced something for ten thousand hours, I am quite certain that this is an incomplete picture. But there is probably no genius who has not practiced for ten thousand hours.

I have a natural talent for writing. It manifested itself more strongly when I was young than did my talent for music. I believe I will yet become a great writer. But I do not believe that I would ever have become a great musician even if I had practiced ten thousand hours. I might have been the modern equivalent of the baroque composer Carl Ditters von Dittersdorf, competent and forgotten. (Wikipedia says he was also a silvologist, which means a forestry expert. Maybe his best work, like mine, was with plants rather than music.)

But to get to the level of skill that I have today, I had to go through my juvenile experimental period. I worked at it very hard when I was in elementary school, using an old Smith Corona open-sided sturdy typewriter. I also spent a lot of time composing. 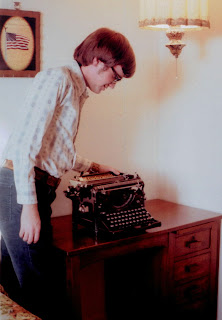 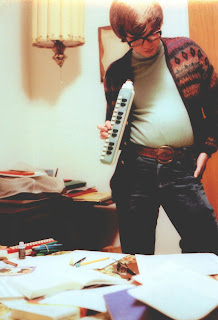 One of the novels I worked on was about Russian spies building a rocket out in the desert of Arizona. The hero of the story was pretty sure that this is what they were up to; they drove panel trucks with a hammer and sickle on it, after all. Every chapter of plot was separated by a chapter in which the hero described all of the plants in his parents’ garden. Future botanist here. I do not remember what the climax was; maybe that was because I might not have finished it.

Another novel was about three kids getting lost in the woods: two boys and a girl. I was right on the cusp of puberty, and I wanted to have one of the boys get together with the girl inside a blanket to stay warm during the cold forest night. The other boy wouldn’t have minded; all he did was recite Shakespeare. But I did not have the courage or foolhardiness to pursue that path. The climax was when the kids, who had dug trenches and buried themselves to stay warm, were sniffed out by a bear, which inexplicably left them alone. I don’t remember much about it other than that I described the mountain as if it had loving parental arms that embraced the hikers; I had read a story in which O. Henry used the word philoprogenitiveness, and I wanted to use it too. My idea of good writing back then was to use as many big words as I could.

When I was in college and old enough to know better, I started writing a romance novel set in medieval England, about which I knew nothing. (About either romance or medieval England, as it turned out. I was too meek to have a romantic life at that time.) It had so many plot bloopers in it that when I wrote a (good) novel decades later I used my earlier novel as an example of one that was hilariously inept.

I spent hours and hours on this stuff. I did not realize it was bad. But had I known how bad it was, I might have stopped writing it and never developed my talent. I remain thankful to my teachers, such as Mr. Jim Kliegl, who put up with some of this stuff and even encouraged me. I think he knew I would become a good writer, based not on what I wrote but on the fact that I was writing it.

Okay, so I finally learned how to write. But I still had a few things to learn, things that I still have to carefully avoid. Here’s an example. As I have written previously, we have patriotic Confederates down here in Oklahoma, whose only purpose in life is to sell confederate flags and drive around with confederate flags waving from poles in their truck beds. Based on my conversations with them, I consider them to be among the most hateful people I have met. They are really scary. When I recently started a new novel, I had a female Cherokee heroine and a male Confederate villain. I won’t give away the plot other than to say I based it on the apocryphal book of Judith.

As I wrote, I made the villain as hateful as possible. Every little detail was disgusting. I was ranting. But then I started running an experiment in my mind. If he was really that disgusting, the heroine would have stayed away from him and there would be no plot. This was when I realized that I did not have a character, but a foil. In order to make him a real character, I had to get inside his mind. I had to empathize with him.

I discovered that, to write a good novel, or even a good story, I had to love even the characters that I hated.

I believe that, with this discovery, I have finally reached the plateau of professional competence. I have begun a new round of queries to fiction agents in an attempt to market another novel, one which I have thoroughly rewritten twice. How many times, hundreds perhaps, I have been turned down by fiction agents. But maybe it has been for the best. (This can’t go on forever, of course, or I’ll be dead.) One agent told me that an earlier version of this novel was episodic rather than having a strong plot. It only took me a year to realize she was right. I will send the new one back to her. I am now glad the earlier version was not published. I have published science books, but am ready now for fiction.

I feel like a plant with dozens of unopened flower buds (the novels). The plant keeps developing those buds to be better and better so that when they open, perhaps one after another in quick succession, the result will be spectacular and pollinators will come buzzing and whirring from miles around. In the event that this happens, that the playfulness of my youth and continued playfulness of my middle years pays off in my maturity, I will let you know.
Posted by Honest Ab at 6:33 AM