The Dark Ages, Coming to a Campus near You

On Halloween, a preacher came to our campus (Southeastern Oklahoma State University) and started yelling about how much God hated women (he said that all women on our campus were sluts), how much God hated Muslims (his shirt read “Allah is Satan,” even though Allah is the translation of the same word the Old Testament uses for God), and how black people should just accept their inferior lot and let white people rule them, all in the name of God.

I have borrowed these photos from Amy Elizabeth Kennedy's Facebook posting. 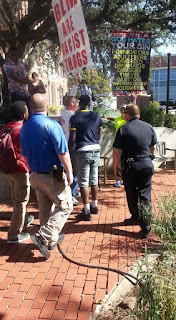 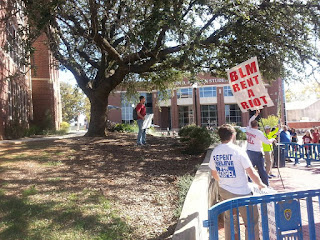 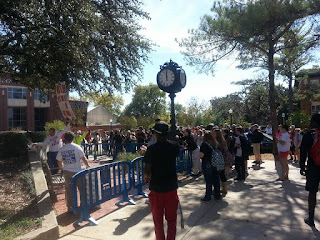 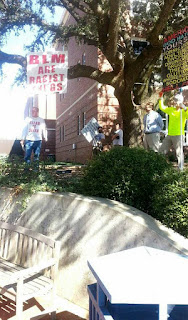 He had permission to come and speak outdoors by the clock tower (well, what passes for one on our campus; a clock on a pole) but he got that permission by lying to the university staff about what he was going to do. He said he was coming to share the Gospel, but of course there was no Gospel whatsoever in anything that he said.

He accomplished his purposes. He wanted to make people angry. He succeeded in making all of the students who heard him upset (not one student took his side, not even our redneck Trump-supporting students). Some of these upset students simply went away. But when the preacher started verbally attacking black students, one black student started to get physically rowdy (wouldn’t you?) while several other black students held him back. The situation got so tense that police had to escort the preacher off campus. His visit was, to him, successful. He wanted to show us how much, according to him, God hates us, and he succeeded in doing that. He wanted an angry response, and he got it. Now he can go back to his donors and say, “See, what did I tell you? I told you Satan would attack me.” (I have heard fundamentalist Christians say that the hostility of the world is proof that you are doing God’s will. By that definition, Hitler was doing God’s will.)

And he left behind him an impotent and confused discussion about how to prevent such incidents in the future. Everyone seems to be saying that we cannot restrict any form of free speech on campus. This is ridiculous. We already restrict speech that would, for example, recruit terrorists or encourage murder. Speech is not unlimited and never has been. I believe that anyone speaking on campus should be sponsored by a class or by a recognized student organization. If we let just anybody come and speak, no matter how hateful their words, how can we be sure they don’t have guns also? And maybe, for all we know, this preacher did.

The story had a different ending on All Saints Day at East Central University. East Central knew this preacher was coming. When he arrived, he proceeded to exercise his first amendment rights, only to discover that the marching band, at exactly the same time and place, was exercising theirs. Guess who won!

I do not know the name of this preacher’s “ministry,” but whatever it is, he should rename it “Make Jesus Look like an Asshole Ministry.” Because this is what he succeeded in doing. Say all you will about how most Christians are not like him. But such a large number of self-identified Christians are hate-filled racists, though few of them are so vocal about it, that I wonder whether this preacher might represent the norm of American conservative Christianity. I suspect that, in fact, this man reflects what American Christianity is like. Good Christians who preach peace and love may, in fact, be a minority in this country, at least among fundamentalists. All you have to do is see the breathtakingly large number of fundamentalist Christian organizations that endorse Donald Trump, whose entire message is how much he hates anyone who fails to revere him; Donald Trump, whose slogan should be, Make America Hate Again.

The impression I took away from this incident is not that Jesus is an asshole—this incident had nothing to do with Jesus—but that on the whole, at least in America, religion is a negative force and I hope we get rid of it as much and as soon as possible. When you consider what America is like, and the Bible Belt states more than the others, you can get an idea of the fruits of religion. Poverty, drug abuse, teenage pregnancy, and violent crime are rampant in the most Christian parts of America. In order to find a society in which people are, by and large, nice to one another, you have to look at countries such as France. When I visited, as a family member not just a tourist, I was astonished at how well people treated their neighbors and fellow citizens and visitors. The sooner we can become more like France, and leave Christianity behind, we will be a better society. A society that, in fact, more closely resembles Jesus. We need a secular society if we are to survive as a free country.

I am sure it has not escaped the attention of anyone that fundamentalist religion is pushing—perhaps significantly—toward the establishment of a religious dictatorship. Remember, they have guns and they believe God has given them permission to use them however they want.

I am particularly angry that I spent so much of my life suckered into religion. I lost decades of my life to having my brain warped by creationism and fundamentalism. Though I left doctrinal Christianity behind over a decade ago, it took an incident such as this to allow me to see how ugly and despicable my erstwhile religious views were.

Creationism is not about science. It has one purpose only: to support a hatred version of religion and get it established in a powerful position so that they can control the thoughts and lives of the rest of us. Arguing science with a creationist? Don’t bother. They don’t even know what’s in the Bible, much less about science.
Posted by Honest Ab at 8:46 AM