Around the country, scientists and citizens celebrated Earth Day by joining in a March for Science. There were hundreds of such events. In Oklahoma, one of the most anti-environmental state (especially on the government level, but also on the citizen level), there were two, and one of them was in Tulsa today.

It was exactly the kind of Earth Day that one of our senators, Jim Inhofe, one of the world’s most famous climate deniers, would have considered to be a sign from God. After months of record-breaking high temperatures in Oklahoma, including January temperatures in the 90s, the weather suddenly became chilly. Yesterday brought heavy rains and today it reached a high of 52. Inhofe would have said that God meant this as a message to us that Inhofe’s anti-global-warming message is divinely-inspired. Where is global warming now, he would ask. He would, however, look around in vain for a snowball to throw as he once did on the Senate floor the way he did a few years ago.

But despite the chill, hundreds of, maybe a thousand, people came out for the march at Fred Johnson Park, at 61st St. and Peoria Ave. First we all gathered in a large circle and held hands around Johnson Park. A drone photographed us from overhead. (It was not a government surveillance drone.) A musician sang This Land is Your Land, which as a biodiversity ecologist I always found puzzling: the land belongs to all the species, not just to humans. Some of the verses of this song are borderline socialism, and were sung originally by Woody Guthrie, an Oklahoma native of whom this extreme right-wing state pretends to be proud. Then we crossed Riverside Dr. (legally) as passing vehicles honked in support (I think; at least some of them waved) and walked in a loop.

For me the best part (aside from seeing many old friends and making new ones) was the placards that people made for themselves. Such creativity! The independent thinking that went into them contrasts sharply with the mindless uniformity of Trump posters. The only element of uniformity was that many Planned Parenthood supporters carried the same posters. But here are some of the placards that I saw:

“Got plague? Yeah, me neither. Thank a scientist.”
“There is no Planet B.”
“Science already made America great.”
“You are the result of 3.8 billion years of evolutionary success. Act like it.”
“Patriots love science.”
There was even a dog with a cardboard poster that said Bark Bark Bark.

Here are some photos of placards. 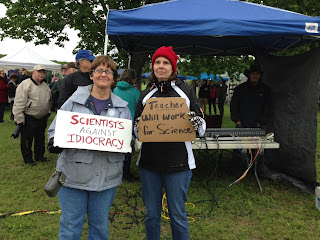 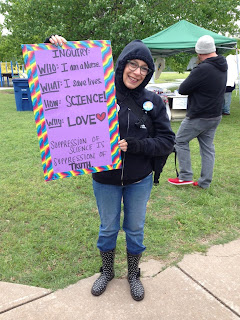 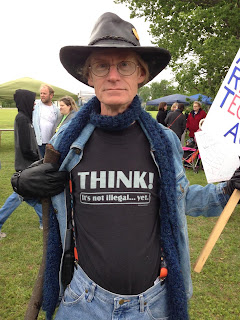 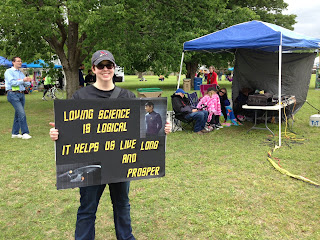 Another important theme was that women should be encouraged to be science leaders. One young woman carried a placard with a quote from Rosalind Franklin. And another carried this poster: 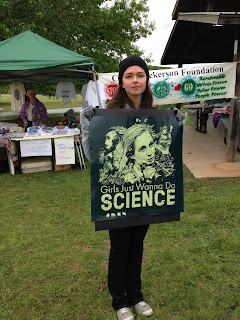 Environmental protection is a big issue in Tulsa. Terry Young, who was Tulsa Mayor from 1984 to 1986, told the story of Helmerich Park, at the corner of Riverside Dr. and 71st Street, a place that my wife and I pass often on the walking trail. We always see a lot of people using the park, including a lot of volleyball players in the sand court. It is one of the places Tulsa can be proud of. But apparently, according to one speaker, the city council met one night and simply declared that the park was not being used and that it should be sold to a developer. The publicity for this sale claimed that the land would be used for an REI outdoor recreation store. As it turns out, the developer planned a mall—one of many new malls in Tulsa—including five acres of asphalt parking. Former Mayor Terry Young is involved in two lawsuits against this development. He decried the ascendancy of ignorance in our national thinking. And yet, ignorance can be a good thing. Scientists admit ignorance but then set out to make discoveries to counteract the ignorance. As Alan Alda, an actor turned science activist, said, “Ignorance is a wonderful thing with curiosity attached to it.” Young pointed out the problems with this decision included the following:

There have been successes. The Carrie Dickerson family led a campaign to prevent the construction of a nuclear power plant at Inola, northeast of Tulsa. The reasons were not just the usual concerns about nuclear waste, but also about how the reactor would have required immense amounts of water, a resource of which Oklahoma periodically runs short. They won! But we cannot assume that successes will continue.

I want to thank the organizer, Nancy Moran, who must have worked tirelessly on almost nothing else except this event. And she is organizing another event, the Climate March, next week, also here in Tulsa. It feels good, really good, to know that there are so many of us, even though we are a minority, who care about what we are doing to the Earth, which conservatives pretend to believe is God’s Creation.
Posted by Honest Ab at 6:52 PM