The fiftieth anniversary of the first moonwalk is tomorrow!

Last time, I posted about some utopian visions from Arthur C. Clarke’s 1986 book “July 20, 2019,” which is the fiftieth anniversary of the first moon walk. Some of Clarke’s ideas have happened, and some were laughably off target. Since Clarke was better than anyone else at speculating about the future, that meant that we were probably all off target in the 1980s. 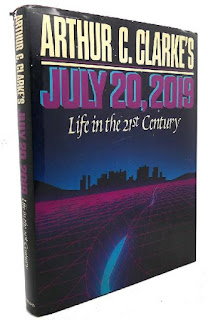 But why did Clarke get some of these things wrong?

Some of Clarke’s off-target predictions were caused by his assumption that humans would, in general, do what was best for the world. Both history and the process of evolution tell us that the technological advances that occur are those that make some individuals rich, even if it makes life worse for most people in the world. For example, Clarke assumed, reasonably enough, that robots can do factory jobs better than humans. You don’t have to pay them, they never get tired, and they won’t sue you. Clarke predicted, “No factory jobs will be left in 2019.” But the simple fact is that there are millions of very poor people who will work for almost nothing; such workers really are cheaper than robots. Clarke also predicted that there will be “more leisure and discretionary income for many workers.” But natural selection, applied to societies, assures that this could not occur. Workers compete for jobs, and the workers who are willing to take almost-full-time jobs (without benefits) and work at night and on weekends and vacations will get the jobs.

Despite his usual hard-headed careful thinking, Clarke shared some misconceptions that are still widespread. He wrote that overpopulation requires “emigration to distant terrains.” Sounds simple enough; too many people here on Earth, send them to the moon. But a few figures show the absurdity of this belief. The population of Earth has a net annual increase of about 80 million people. (Back in 1969, it was even greater, about 100 million.) There is not enough money in the world to send 80 million people a year to the moon and keep them alive. If, as Clarke predicted, world population growth would have stopped in 1990, something he should have known in 1986 would be impossible, then this whole reason for space colonization would be nonexistent.

Here is possibly the most important point. “Who could have known in 1969,” wrote Clarke, “that the Apollo mission would leave man unchanged?” The answer to this question reveals exactly why so many of Clarke’s predictions were wrong: Humans are the product of millions of years of evolution, and this includes our behavior. One reason that metal bodies of vehicles (as opposed to fuel-efficient fiberglass bodies) still exist is that tough redneck guys consider big metal trucks to be essential to their self-identity. One reason we will never have fake mental sex replace real sex (as Clarke predicted) is that many men use real sex not just for fun but for dominance. Clarke speculated that there would still be wars in 2019 but they would be fought by robots. This has not happened, in part because humans, at least males, like to play the fantasy role of the great warrior, and do not want to let robots do all of it for them. Our future, just like our past, will be constrained by evolution.

The conclusion I reach from Clarke’s book is that, fifty years after the first moonwalk, human nature is unchanged. Therefore the world is even more dangerous and unstable than it was when Clarke wrote in 1986.