Do Non-Human Animals Have Music? A Meditation on Shostakovich

This essay is a personal reflection on my encounter with a specific piece of music, not a general overview of the subject of animals and music, to which other scientists, not I, have devoted their careers. It is clear that many animals (including fruit flies) use sound for communication, especially for territories and mating. The sounds have patterns that scientists cannot resist calling musical. But maybe we are imputing our experiences onto the animal kingdom. We already do this when we call a beehive’s captive egg-laying machine a “queen.”

My first exposure to the Fifth Symphony of Soviet composer Dmitri Shostakovich was when the symphonic band I was in, early in graduate school, played a transcription of the finale. Shortly thereafter, in 1982, I bought the record of the Bernstein performance, and listened to it a lot. That was the same year that I read The Lord of the Rings trilogy. For me, and perhaps nobody else, the music and the novels were closely associated. Especially in the first movement of the symphony, I could hear The Lord of the Rings: the quiet dance of Luthien Tinuviel, in elfin mists and waterfalls, during a quiet throbbing of the strings; I also heard marching armies, attacking orcs, and prancing horses.

It was also at that time that I was experiencing, as young people often do, wrenching emotions, the kind that make no sense in retrospect but which are all-consuming when they occur. It was at this time that, to me, the slow climax of the strings in the middle of the finale (manuscript numbers 113-114) encapsulated my life. I felt this so strongly that I copied out the melody and taped it to my door. Certainly, for me, this symphony was a way of giving substance to my own personal and very intense emotions. 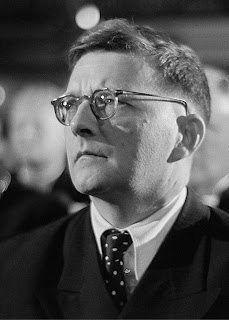 Recently I heard a performance of this symphony by the Tulsa Signature Symphony, led by Andrés Franco. It was certainly an intense performance; the maestro was practically dancing on the podium. The entire concert was, first, Franco’s explanation of how the symphony was written and its musical meaning; and, second, the symphony itself. I was surprised how many people besides myself enjoyed the lecture so much. It was from this lecture that I learned that the Shostakovich Fifth Symphony had intense emotional meaning to the Russians under Stalin’s Soviet dictatorship—almost a whole nation experiencing the kind of intensity in 1937 that I felt in 1982. During the first performance in the Soviet Union, many in the audience wept.

I had never thought about this until Maestro Franco explained it. The entire Soviet Union was under the most brutal form of dictatorship—the psychological form. Nobody could trust anyone else, even among friends and family. Any other person might tattle on you to the Soviet authorities, whereupon you would be arrested, imprisoned, and either killed or allowed to die. Millions died during Stalin’s purges and the famine that he directly caused by imposing the totally bogus genetic theories of pseudo-scientist Trofim Lysenko (see my earlier essay). Under such conditions, not only was it impossible to, without risking your life, to complain about Stalin, but it was impossible to even weep for the agony that he caused. Everyone was supposed to pretend to be happy little Communists. The performance of Shostakovich’s symphony was the only place in the USSR where you could cry in public and get away with it.

Dmitri Shostakovich stayed in the Soviet Union until his death in 1975, writing music that was as daring as he could get away with. After his death, his son Maxim and grandson Dmitri the younger defected to the United States.

The performance of this symphony was, for me, though perhaps less so than for the millions of people suffering under Stalin, a ravishing experience. A couple of parts in Franco’s performance were not what I expected. I have listened to the Leonard Bernstein recording for almost 40 years. The end of the finale, as performed by Bernstein, was like the bird of the spirit of the Russian people flying away into the sky. As Maestro Franco performed it, it sounded like this bird never quite got off the ground, dragged down because a gigantic soviet medallion draped around its neck, and it could barely rise any higher than the missile silos. But the tempo is the conductor’s prerogative.

This is what makes music what it is, as Maestro Franco explained. It unites us, despite the many other things that divide us. “Songs” do not unite birds; it is the means of their competition with one another for territory and for mates. At this time in American history (the performance was right in the middle of Trump’s impeachment trial, though nobody could have predicted this would happen), America needs something to bring us together. It is divided as it has perhaps never been since the Civil War. About half of Americans are perfectly satisfied with Trump declaring himself to be free of any constitutional constraints; to be, as the congressional prosecutors literally said the very day of the concert, a tyrant, a king, a dictator. We desperately need something to unite us. Politics certainly cannot. Even science (which the conservatives openly reject) cannot. Can music unite us? Perhaps it is music that will keep our very souls alive in coming years. It appears that music, especially that of Dmitri Shostakovich, was what kept the Russian soul alive during the dark Stalinist decades.