When to Give Up and Trust the Future: My Farewell to the Seaside Alder

As I look into a new decade, I see the imminent approach of retirement. A major focus of my professional work has been to understand, and to save, a rare species of shrub known as the seaside alder (Alnus maritima). My colleagues and I have found that:


In the entire world, this species consists only of three subspecies:


That’s it, for the entire world. Only a few of the populations are protected. 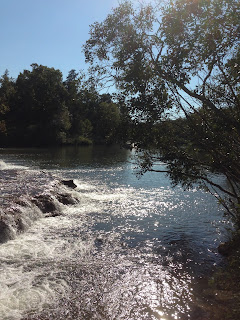 In this photo from the Blue River in Oklahoma, the alder is the right foreground tree.

There are a few of the Delmarva alders in Trap Pond State Park; the others are unprotected. My colleague Phil Gibson and I looked for one population that was documented in the 1970s, only to find that it consisted of just one shrub, in someone’s back yard. We did not tell them about it, lest they cut it down before the much-feared federal government could tell them that they could not.
Most of the Georgia alders are on private land; a few are now, thanks to the work of Catherine Borer, protected by the major utility of the region, which has a large power plant nearby.
Many of the Oklahoma alders are on state wildlife land, and are thus protected.

I did not pursue the option of trying to get the federal government to list this species as endangered. In 2010, I talked with the Southeast district director of the Fish and Wildlife Service. She said this species was already on a list which was the subject of litigation; the plaintiffs thought the FWS was proceeding too slowly. The director told me that, even if the suit was won, they could not work on it until 2016. I decided to try other options.

This species produces antibiotic compounds in its branches. Not being a chemist, I cannot identify these compounds, though I have identified a number of their properties. A small pharmaceutical company in Massachusetts was interested in developing it, but just when the papers were signed and they began their research, Little Pharma was bought up by Big Pharma, which is hostile toward the development of new antibiotics, regardless of how much they are needed. Big Pharma, perhaps only by neglect, killed this line of research.

The Nature Conservancy of Oklahoma attempted to grow some of these alder bushes in a portion of the Blue River that they reclaimed from degradation by cattle. This was the vision of Jona Tucker, who saw this eroded stretch of river and saw a new riparian forest. But deer would eat the little saplings. Only deer fencing—which washed away with every flood—could keep the deer out. The Preserve is still there, but without a thriving population of alders.

I then attempted to get Oklahoma gardeners to plant this species in their wetlands. A few of them did, but not many. One such gardener sold the land and moved, and the fate of what the new owner probably thought was a worthless bush is unknown. Few gardeners have the approximately 10-foot-by-10-foot wet area in the sun that a single bush requires. My former student Sonya Ross has planted several of them on the campus of Southeastern Oklahoma State University. Will they be maintained after I am gone and she is gone also? I have also attempted to get the Tulsa Botanic Garden to plant them extensively to hold down the soil of their new plantings and to educate Tulsans about this important native species. As far as I know, only a few alders have been grown and none planted outdoors.

A botanist in Mississippi recently contacted me for some seeds, which I sent to him.

I cannot save this species single-handedly, nor can my colleagues Phil or Catherine, nor can any one person. I was hoping I could have the salvation of this species be my crowning achievement, but this dream has died. This species enriches the soil by harboring nitrogen-fixing bacteria in its roots, and produces medicinally important compounds in its branches. I am just going to have to trust the future. I know that the pharmaceutical angle will not work. Researchers in Oregon seem to have rediscovered the antibiotic compound, which is found not just in the rare seaside alder but in the incredibly abundant red alder as well; the medicinal angle will not help save the rare species. Maybe the FWS will classify the species as endangered. But it was a low priority under the Obama Administration, and all endangered species are now the personal enemies of Donald Trump. Maybe someday someone will rediscover a few of the shrubs at Trap Pond or along the Blue River or in Mississippi. Maybe someone at Southeastern, decades from now, will remember what these trees are.