What Do You Do with Your Scientific Knowledge?

Scientific knowledge is not just a private pleasure. It is something to be shared.

A few months back, in my other blog, I shared a story about a kind of Republican you seldom see any more, and I used my childhood optometrist as an example: Dr. James E. Miller of Exeter, California. I recently found an old newspaper clipping about him, from about 1972.

Dr. Miller loved astronomy. Not just looking at stars and planets, but understanding how far away they are and the motions of the planets. He must have felt the kind of excitement that Galileo and Copernicus felt when they realized that the story of the stars was very different from what they had heard when growing up. Dr. Miller was a conservative Christian, but I suspect he must have agreed with Galileo that the Bible told us how to go to heaven, not how the heavens go.

He bought a transparent celestial sphere, with planets and stars, not for his own enjoyment but to teach young people about the heavens. Two places he did this was at Boy Scout camps, helping boys earn their astronomy merit badges, and at SciCon, a science camp from back in the days when there weren’t very many science camps. 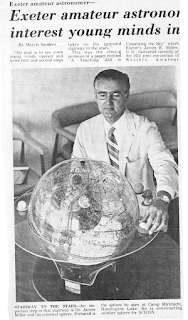 On two occasions this month, I got out my telescope (which I keep in my university lab) to look at Mars, Jupiter, and Saturn. I cannot see them very well, and my telescope is very difficult to use. Mars, though at its closest approach to Earth, just looks like a pink disc. I could just barely see Saturn’s rings. I invited students to come and look at the planets. Two of them did. The excitement was not in the quality of the image, but in the experience of having photons from the planets go straight to your retina. One of the students exclaimed, on seeing Saturn’s rings, exclaimed with great excitement, “I see it!”

I also asked the two students why Mars is red. The red comes from oxidized iron. On Earth, this usually means a reaction with oxygen. But Mars has no oxygen. What caused the iron to oxidize, that is, to lose electrons? I hinted it was something that an oxygen derivative largely shields the Earth from. It was the student who was not a science major who guessed right: UV radiation. The red surface of Mars is only a few centimeters deep.

On those evenings last week, I was doing what Dr. Miller did. And I’m pretty sure that I got a lot of my enthusiasm for all the rest of my science teaching from Dr. Miller.