Imagine yourself on an alien planet, with weird rocks and an almost barren surface. The scene can be very dramatic, as in this example: 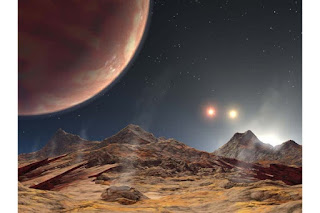 But for most of us, a beautiful green forest as seen from a mountain top, with blue skies, or else a green tropical forest from which rain drips refreshingly, is much more beautiful. This is a photo from a forest near my home in Tulsa. 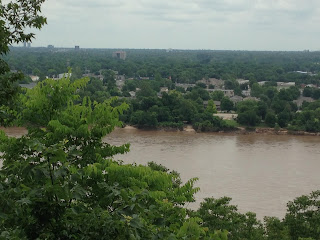 Yet there is no logical reason why the second scene should be better than the first. It is impossible to define beauty in logical terms.

But it is possible to define it in evolutionary terms. To the extent of their mental capacity, all animals have evolved to feel that their environments are beautiful. Because of our large brains, which allow a feeling of spirituality, we humans are the animals most powerfully moved by the sense of beauty. And it is our natural environments that we find most beautiful.

Why would evolution create a sense of beauty in our minds when we see our natural environment? Because if we feel inspired by the beauty of our natural environments, we are more likely to endure its occasional hardships and to live productively within it, finding all the resources we need for our fitness. Someone who thinks that their environment is ugly is unlikely to try very hard to find resources within it. More generally, if we are happy, we will be healthy and get along better in our social circumstances.

But that almost never happens with humans. No matter where people live, they find their environment beautiful. Even on the barren steppes of Siberia. I had a student once from northwest Kansas. There are beautiful parts of Kansas, but this was not one of them. Yet she said, “It is the most beautiful place on Earth.” Probably, even the poor people who search for usable garbage near the landfills in South America think that a mountain of trash can be beautiful, even as they see the peaks of the Andes in the distance.

I find that beautiful natural scenes from this planet are the scenes that move me with the greatest sense of beauty. And evolution is the reason for it.