Just How Strong Is Altruism? The Four Horsemen of the Apocalypse, part 2

In my columns and books, I have written extensively about altruism. Altruism is doing well by doing good. It is what happens when one animal is good to another animal in the same species. Altruism has been studied extensively by evolutionary scientists, not only via mathematical theory, but with lots and lots of examples from the animal, including the human, world. Altruism occurs because, very often, the best way for an animal to pass its genes on to the next generation (which is what natural selection is all about) is to cooperate with other animals. It often pays to be good. Not only that, but natural selection has favored many positive emotions to encourage altruism: it feels good to be good.

But in order for altruism to work, there has to be a dividing line between the inside and the outside of the group in which altruism occurs. Natural selection may favor altruism inside the group, but favors behavior that is merciless, and feelings of hatred, outside of the group. An undeniable trend of human history has been the uneven and gradual extension of the dividing line, so that we incorporate more and more people as insiders. A lot of us include the whole world, even the non-human world, in our inside group, or at least we think we do. The question, therefore, is not whether altruism is beneficial or even possible, but how common is it? That is, altruism is part of human nature, but so is brutality. Is human nature good, or bad? I believed that it is both. One of my students, however, drew upon his military experience, in which he was traumatized by what he saw in Bosnia and Afghanistan, to say that human nature is evil. I thought he was wrong. Now I’m not so sure. After reading The Four Horsemen of the Apocalypse (see previous essay), I wonder whether altruism might be fragile and might even go extinct in our world of the immediate future. Are, as the author Ibañez said, the Four Horsemen the reality of the world? 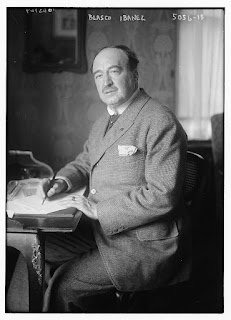 For those of you who may not know, The Apocalypse is the Book of Revelation, the last book of the Christian Bible, in which a man named John described a vision. In just part of this vision, he saw four supernatural horsemen. One was war, another was disease, another was famine, another was death. Can altruism really keep these metaphorical horsemen from galloping around the world? Or is the world actually theirs? I’m no longer sure.

Ibañez envisioned the Four Horseman galloping freely over the Earth. In one scene, Ibañez described an apartment in Paris in which a Frenchman was married to a German woman. As soon as the war began, the Frenchman went off to kill Germans. He did not consider his wife to be part of the hated outside group, despite her nationality. But she felt the guilt of knowing that she was a German surrounded by the French who did not deserve to be attacked by her people. She jumped off her porch and died in the plaza. It was the Four Horsemen, said Ibañez, who pushed her.

A French servant woman, having seen the devastation of war, said something that might summarize the thoughts above: “God has forgotten the world.”