Garbage in Oklahoma: Another Message from Fluff

Hi. This is Fluff, a female cottonwood tree in Tulsa (she/hers). My thoughts are being passed on to you by a botanist named Stan Rice (he/him/his), who is the only human who stops to talk with me.

Right at the base of my trunk, the City of Tulsa has designated an area in which volunteers can place bags of trash. The volunteers can pick up pieces of garbage from the banks of Joe Creek, which is a drainage ditch near where I am growing, put them into plastic bags, and leave them for the city to pick up. 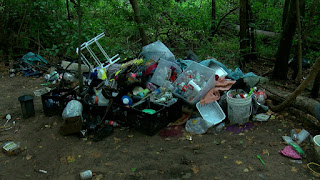 Stan has made over a hundred estimates of the number of garbage items, easily visible from an automobile, along Oklahoma highways. The number ranges from ten to a thousand, with the average being about a hundred, per mile. This means that, on a typical 200-mile drive through Oklahoma, you are likely to see twenty thousand pieces of garbage. No wonder Oklahoma has such a bad reputation, completely apart from the political news of…don’t get me started. Since Stan made so many estimates, it is not likely that bias (which I discussed in an earlier message) accounts for the results: Stan did not just see a trashy place and count the pieces of garbage. He made a systematic, unbiased survey.

Every once in a while, you will find plastic bags of garbage along the roadside in which volunteers have picked up garbage for the highway department to pick up. Once Stan even saw a man actually picking up garbage. But, from month to month and year to year, such acts seem to make very little difference in the amount of garbage along the road. The reason is the huge number of people who throw litter on the roadsides. While most people do not litter, a very large number of people do, and do so in huge amounts. One of the most common ways is that people pile light garbage in their pickup truck beds and drive along the highway, pretending to not notice that the garbage blows out of the truck bed.

And nearly all this garbage is recyclable. Not that it makes any difference right now; the City of Tulsa recycling facility is shut down due to a fire. Recyclables, put into separate bins by many conscientious homeowners, now gets mixed in with the regular garbage.

But I told Stan about another source of garbage along Joe Creek. Thieves break into houses and grab stuff to take with them. Later, they hide under the bridge and sort through it to find anything of value to them, whether it is costly items or pieces of information they can use for identity theft. They simply dump the remainder into the creek bed. Since I stand by the creek all day and all night, I have seen this happen. In addition, the homeless people gather garbage with which they construct shanties in which to live along the creek. Much of the garbage problem is also a crime problem, and a poverty problem. And a sanitation problem. It is not at all uncommon to see piles of human excrement on the path. Designating a place under a cottonwood tree for volunteers to place bags of trash will not solve these problems.

In addition, I told Stan that it is nearly inevitable that people will start bringing bags of household garbage to leave at this spot. The people who live in apartments have large dumpsters for their garbage, but these dumpsters are frequently overfilled. And then there is the stuff too big for dumpsters. Stan once saw a semi-truck fuel tank left at a recycling depot. I told Stan that the spot at the base of my trunk will quickly become a pile of junk. The location is easily accessible by truck, including pickup trucks that will bring in big pieces of junk to dump them.

The problem is that you Americans get, use, and throw away too much stuff, almost all of it in large packaging. The creek bed in my shadow is thickly studded with Styrofoam fragments. You don’t need all that stuff to be happy. Of course, what would you expect a cottonwood tree to say?

I produce a lot of leaf litter each autumn. But unlike industrial human litter, my leaves decay rapidly and help to build up the soil.

The City of Tulsa sign, beside my trunk, has been out for a couple of days and is already covered with graffiti. The city officials have good intentions, but what can they do against the mass of human filth?

There is so much garbage along the creekside path, including broken glass, that Stan doesn’t like to walk there anymore. But I hope that he comes along to say hello to me once in a while. Until next time, farewell from Fluff, the cottonwood tree.