An important question in scientific thinking is, how do you know which measurements to trust? Let me give an example regarding protein. I just posted a video about this.

For photosynthesis, leaves require both chlorophyll (to absorb the light) and an enzyme called rubisco (to absorb the carbon dioxide). All leaves require both, but a leaf down in the shade requires more chlorophyll, and a leaf out in full sun requires more rubisco. If a scientist is interested in measuring the amount of rubisco, it would seem to be easy enough: just measure the amount of carbon dioxide that the leaf absorbs.

But carbon absorption varies from moment to moment, based on temperature, light, and amount of carbon available to the leaf. What many scientists really want to know is, how much carbon absorption capacity does a leaf have? That is, how much has the leaf invested in carbon uptake? We expect leaves in full sunlight conditions to invest more in carbon uptake—that is, to make more rubisco. That’s what we really want to measure. 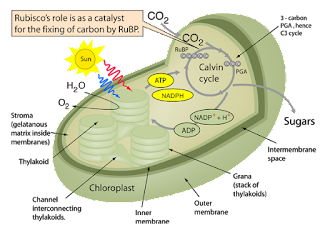 But measuring the amount of rubisco is difficult and expensive. Is there a simpler, and still valid, way of measuring rubisco indirectly? The measurement has to have construct validity—that is, it must give a realistic idea of how much rubisco is in the leaf.

It turns out that there is such a measurement. Instead of picking rubisco out from among the thousands of proteins in the leaf, just measure the total amount of protein. Total protein content is a valid estimate of rubisco content because, as it turns out, rubisco constitutes one quarter of all the protein in the leaf. It stands out from all the others. Total protein content is a realistic stand-in for rubisco content.

Measuring the nitrogen content of leaf tissue is fairly simple—not quite simple enough to do in your garage, but it doesn’t require a fancy lab. The Kjeldahl technique was developed over 100 years ago. You put the tissue in strong sulfuric acid, which pretty must blasts the organic molecules to smithereens. One of these smithereens is ammonia. Most of the nitrogen in the leaf ends up in the ammonia, which can be easily measured by titration. Thousands of articles have been published in which investigators measured rubisco in leaves indirectly by the Kjeldahl technique.

But the method is open to manipulation. It is a good measure of protein only if most of the nitrogen in the sample comes from protein. For a leaf, this is a good assumption. For milk, it is a good assumption. That is, unless a milk producer wants to lie about how much protein is in the milk. This is what happened in China in 2008. Milk producers tried to pass off low-protein milk as high-protein milk by adding melamine, which contains nitrogen atoms. Maybe nobody would ever have noticed, but Chinese babies started dying from kidney failure.

I suppose it is possible for botanists to adulterate their leaf tissue with melamine to bump up the estimate of rubisco content. But who would do that? The milk producers thought they could save millions of yuan by adulterating the milk. But, although crime pays, botany doesn’t. The cardinal rule of credibility in science, as in anything else, is to follow the money.

I give other examples of construct validity, and its everyday importance, in my book Scientifically Thinking.